THE ADVENTURES OF MARILYN (Part 0000a) 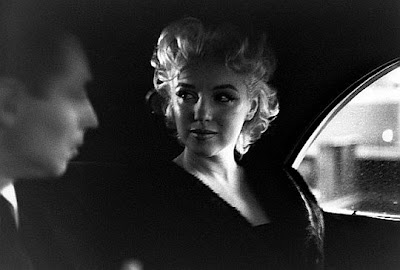 In which Marilyn, after several weeks in hiding, finally meets with The Controller in the back of a Buenos Aires taxi. The Controller is out of focus and Marilyn is far from happy. “I don’t know how long I can keep on doing this?”
The Controller is motionless and grim. “Keep doing what exactly?”
“You know what I’m talking about.”
The Controller remains out of focus and refuses to offer her a way out. “No, I don’t know what you’re talking about.”
“I’m talking about ducking the Apollonian gestapo. I’m talking about making nice with Dionysian assholes. I’m talking about running through the sewers of Vienna, following the neuron trail of Harry Lime and the Vril, and avoiding the wrath of the Mole Men and the lesbian advances of Spider Women who want to go out and die after they’ve had me. And living on gin and Nembutal, and…"
The Controller interrupts her. “You’ve always lived on gin and Nembutal.”
“That’s not the point.”
“So what is?”
“I never know if my destination is a womb or a tomb.”
“You’re just tired.”
“I’m tired in two hundred different realties.”
(THE ADVENTURES OF MARILYN NOW HAS IT’S OWN PAGE SO THE WHOLE THING CAN BE READ WITHOUT SCROLLING. CLICK HERE)
Posted by Mick at 7/25/2009 04:29:00 PM 2 comments:

SATURDAY PICTURE SHOW – BOB AND JOHN ON HEROIN IN A LIMO. 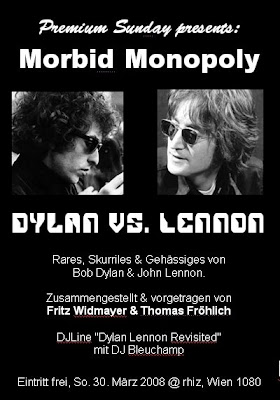 Click here for the notorious clip from Eat The Document which is probably about as inspiring as a hamster on a piano eating popcorn.

I'M YOUNGER THAN THAT NOW... 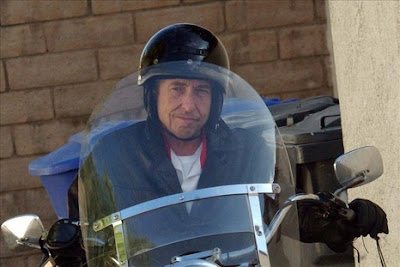 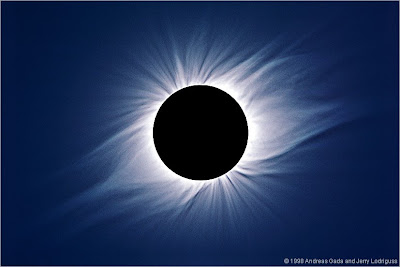 Seemingly the world has survived the total eclipse over Asia. The Wheel of the Dharma did not grind to a halt. The axis did not tilt. The poles did not hop to a reversal. The tectonic plates are still where they were yesterday. The Reptile Men did not emerge from their caves in Tibet. The Vril did not manifest. Children did not act in paranormal unison. The Yangtze did not run red with blood, and as far as I know, the Earth is not hurling towards the black hole at the epicenter of the Milky Way. Pretty good. Pretty neat, as Jim Morrison once remarked. On the other hand, the bloody red sun in fantastic LA proved relentless. The heat was unabated. I have email to address about Victor Renquist and other topics, and I continue to work on the Five Year Plan, but I am hot and exhausted and must, perforce, cease.
The secret word is Bed
Posted by Mick at 7/23/2009 01:20:00 AM 3 comments: 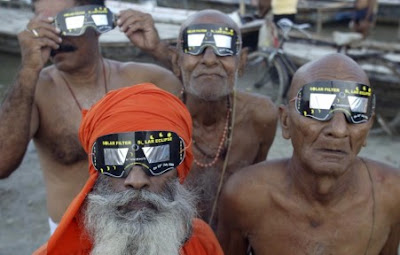 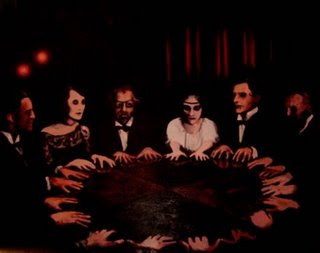 THE REVOLUTION WILL BE PUBLISHED IN PAPERBACK 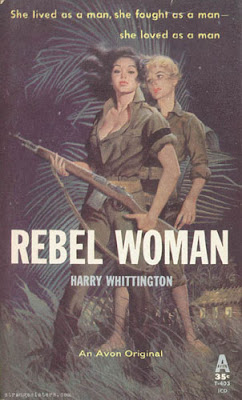 Can't write tonight. I'm working on The Five Year Plan.
(I also learned that there are more than 200 commercial fart noise applications for the iPhone, and it kinda depressed me.)
The secret word is Overcome
Posted by Mick at 7/22/2009 02:28:00 AM 4 comments: 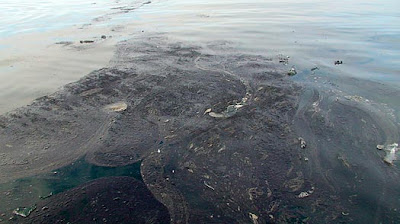 Stories surfaced about the huge carnivorous slimy blob floating in the sea off Sarah Palin country just like the start of some classic monster movie. Indeed, it was such a familiar scenario that I was reminded of Hedorah – the extraterrestrial kaiju formed from pollution – who was the bad guy in Godzilla v The Smog Monster.

“A group of hunters aboard a small boat out of the tiny Alaska village of Wainwright were the first to spot what would eventually be called "the blob." It was a dark, floating mass stretching for miles through the Chukchi Sea, a frigid and relatively shallow expanse of Arctic Ocean water between Alaska's northwest coast and the Russian Far East. The goo was fibrous, hairy. When it touched floating ice, it looked almost black.
But what was it? An oil slick? Some sort of immense, amorphous organism adrift in some of the planet's most remote waters? Maybe a worrisome sign of global climate change? Or, as folks who followed the blob via the Internet wondered, was it something insidious and perhaps even carnivorous like the man-eating jello from the old Steve McQueen movie.” (Click for more. And click here for a trailer of Godzilla v The Smog Monster.) 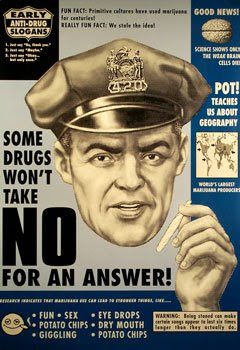 The ever-alert Munz sent us this tale that would seem just one more reason to legalize marijuana. Whatever it might do to stoners, it makes cops terminally stupid.

“An undercover Iredell County Sheriff's Office deputy recently purchased drugs from undercover Statesville police officers, raising questions about communications between the two agencies. Statesville Police Chief Tom Anderson said undercover officers from his department were working a week-long case when they met with someone interested in selling a small amount of marijuana. The undercover SPD officers met with the individual in the parking lot of a local store to make the deal, Anderson said.
But the officers became suspicious that the seller was, in fact, an undercover deputy, Anderson said. SPD officers placed a call to Capt. David Ramsey, who heads the sheriff's office narcotics unit, and were told the seller was not a deputy, Anderson said.
"At that point we proceeded like we normally do and placed him under arrest," the chief said. After the arrest, investigators from the sheriff's office arrived and confirmed the seller was an undercover deputy and he was released.” (Click here for more.)
Posted by Mick at 7/21/2009 12:12:00 AM 2 comments: 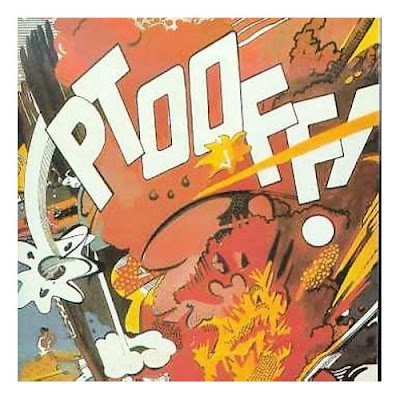 As Stu recently pointed out in a comment, a lovely review of the ancient Deviants album Ptooff! (originally sent by the excellent Joly) just made me irrationally happy. (Click here to read it, and click here for a sample track.)
Posted by Mick at 7/21/2009 12:04:00 AM 3 comments: 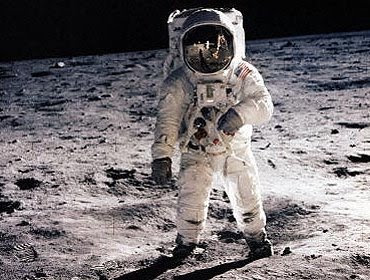 Forty years ago today human beings walked around on the goddamned moon and it was a wonder to behold, until the inset of Richard Nixon came up in the top right hand corner and then we threw things at the TV screen. Humans had flown all the way through space in a tin can powered by hundreds of tons of exploding explosive, and controlled by hardly more RAM than it takes to run a printer. It was a recklessly absurd dream and we, humanity, pulled it off. It was awe inspiring. By 2001, we’d be in orbit off Jupiter with HAL 9000. But along the way, we wised up. We don’t have dreams any more. We traded them for new aps on the iPhone. Now we bleat and twitter. Infinitely more sensible, and so easy when we have neither aspirations or shame. Look where dreaming and voyaging across the void really got us. For a moment we questioned the nature of our position in the cosmos, and entertained the brief concept that all things were possible. And that could not be allowed to continue. But it happened, and a few will remember.

So be warned. Don’t come round here with all that crap about how all of Apollo 11 was faked in a movie set in Arizona. Don’t bother me. Tell it to the Flat-Earthers. I don’t want to hear it. The moon landing was too big, too complex, too grand, there was too much telemetry, and too many people. It was too breathless and too complete. Don’t diminish what we did manage to achieve before we surrendered or gave up. (If you want to read the argument, click here.) 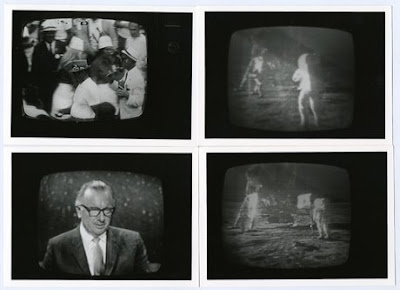 STARSHIPS OF PERVERSION (part one) 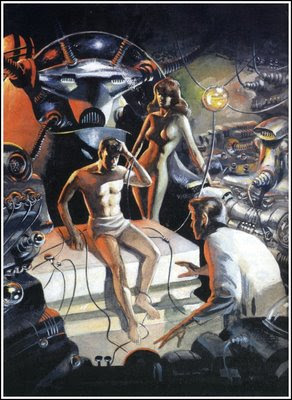 Life and function keep taking odd twists which I’m never sure if I should read as Jungian signposts or just ignore so as not to exacerbate my paranoia. The current confusion is as follows. Back in 1996, an assemblage of musicians including myself Andy Colquhoun, Wayne Kramer, Jack Lancaster, and a whole bunch of favorable, stalwart, and highly talented men and women, recording under the collective title Deviants XVI, cut an album/CD called Eating Jello With A Heated Fork. One of the tracks was a discreet sado-masochistic love poem called The Arts Of Darkness.
Today, some thirteen years later, our good friend Butlincat informs us in a comment that this same piece has mysteriously appeared on YouTube as the audio background for what appears to be a slideshow about how Stonehenge is a inter-dimensional portal that allows UFOs to penetrate our reality. The juxtapositioning is, to say the least odd enough ponder on a warm Sunday with the air conditioner humming. Click here to see for yourself.