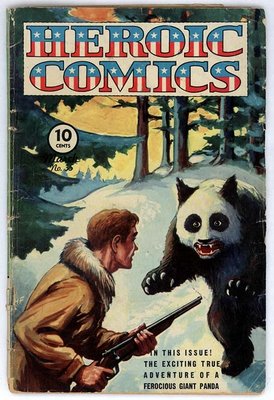 I seem to be on an ursine kick this weekend, but also need an excuse to post this great graphic from Valerie...

THE BEARS ARE PISSED!
They’ve been shot at in New Jersey, messed with in Montana, the polar bears in the arctic are seeing their environment melt to slush around them, and now fucking Bush wants to hand it all over to his oil baron masters. Also I understand that studies show male polar bears’ genitals are shrinking due to pollution. (I got this fact from Bill Maher, but I guess he’s as good a source as any.) And Butterstick the cam-panda (left?) is grown and wholly forgotten. Would you blame the bears if they came looking for payback? And wouldn’t it be nice if one of them ate Christopher Hitchens.

The secret word is Paddington

ROBERT REDFORD WANTS YOU TO WATCH THIS VIDEO, AND SO DO I AND SO DO THE BEARS

DOGGONE BUMMER
Pluto is no longer a planet. After a tumultuous week of clashing over the essence of the cosmos, leading astronomers stripped Pluto of the planetary status it has held since its discovery in 1930. And I’m bummed, or, as HCB puts it "Woke up this morning, dug around in my pants and found I was missing a planet. They can't take that away from me." The question of of the exact nature Goofy has not been resolved.

IN THE SAME EMAIL, HCB ALSO REMARKS
"Funny you'd bring up Lee Harvey in connection to Karr – I thought of Oswald as soon as I saw him. Same vacancy or whatever that quality is in his eyes. Someone who has really crossed that border. Meantime they're showing more footage of JB Ramsay on stage in her bathing suit.
(Spoiler warning)
"Don't know if I mentioned this, but the whole deal with Little Miss Sunshine is all about a kid who wants to go to one of these pageants, but who is completely unsuited for the thing. Meantime, unbeknowst to the audience and the girl's family, her porn crazy coke and dope snorting grandpappy Alan Arkin has tutored her to do a strip to Superfreak, which is the climax of the picture. I keep wishing they'd play that song when they show JBR on these segments." 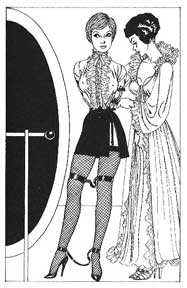 "Don’t worry about the morning after, darling. The night before is going to be complicated enough."

FINALLY SOME REPRODUCTIVE GOOD NEWS
Adults may buy the morning-after pill without a prescription - but only with proof they're 18 or older, US federal health officials decided Thursday. The Food and Drug Administration ruling culminated a contentious three-year effort to ease access to the emergency contraceptive.

The secret word is Finally

A COUPLE OF LINKS
The radical yippie archive of the late great Stew Albert
http://www.stewalbert.com/

And this – if nothing else – presents a weird cross section of humanity...
http://www.elvisinfonet.com/index.html

CRYPTIQUE – Why is there something instead of nothing? 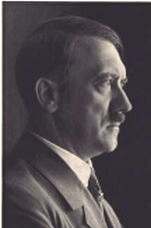 THE ANNALS OF FLATULENCE
I cannot help but wonder who organized yesterday’s cable news inundation of items about how George Bush totally adores fart jokes and even "cuts a few for laughs." I figure the Democrats hardly have the wit to pull something so perfectly frat house, so it has to be the work of some faction of Republicans attempting to get out from under the escalating national dislike of their President. Unfortunately no one – not even the History Channel – had the audacity to work in a resume of previous world leaders famous for their farting. But here on Doc 40, audacity is our business. Heading the list, of course, would be Adolf Hitler (left), who broke wind continuously as a result of his bizarre, self-designed, vegetarian diet that seemed to consist of lentils and cabbage, followed by chocolate eclairs. Unlike Bush, however, Hitler did not find this in any way amusing, and was profoundly embarrassed by his odorous affliction. (It must be made clear that Doc40 is in no way likening – or even comparing – our President to Hitler. It’s just that a fart is a fart.)

The secret word is Poot! 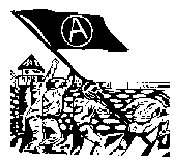 FROM THE SUBMERGED TO THE RIDICULOUS
After being creeped out all day by the absurd news debate about whether John Mark Karr (already he has the killer’s three names – as in Lee Harvey Oswald) drank champagne on his business class flight from Bangkok, punctuated by the bloody President telling us that we’ll stay in Iraq for as long as he’s in office, I watched When The Levees Broke, Spike Lee’s superb documentary of New Orleans and Hurricane Katrina, and could hardly believe I was living in the same country. Lee’s unflinching and gorgeously edited four part piece (two more tomorrow on HBO) brought the suffering alive and reminded us that, while the barrage of Karr obsession sweeps cable news, New Orleans is still in ruins, and the bastards who did nothing, far from being impeached, fired, or taken out the back and shot, still wield their vacuous and vicious power. And more hurricanes are going to come.

The secret word is Swine 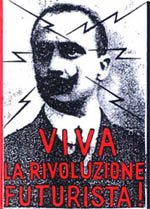 But isn’t the future itself by very definition a continuous and unstoppable revolution, and the only option it presents is to shape its temporal insurection from a position we must perceive as altruism? (Or maybe revenge?) Because, come what may, we will not escape it.

Who would have thought, even maybe a dozen years ago, that such communication as this would have been possible, and, on this ethereal net, I would be free to ponder – pointlessly or otherwise – sadness and madness, the inconsequential and the crucial, the literary and the perfunctory, the weight of deprivation, the absence of adoration, the lack of liason, and the lightness isolation, to balance mortality and triviality, the mundane and the feline (who, right now, loudly requires me to go with him on a midnight adventure.)

La Rivoluzione Futurista advances, with its attendant wingmen, those two old lags Confusion and Delusion, while the horsemen shoot seven-come-eleven for our pitiable humanity.

The future, by nature, is revolution. We make of it what we can.

CRYPTIQUE – Or do you just want to be on the side that’s winning?