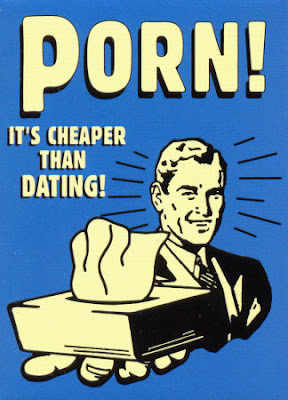 I found this gem in my web travels and, yes, well, I guess it does have a point. It also avoids STDs too, I suppose, but what effect it might have on our simultaneously sexually obsessed and sexually repressed culture might be debated. But while you ponder that, I've just posted a bunch of new tunes on DOCTUBE which may be just as much fun.

The secret word is Wood

I have always been drawn to the romantic concept of the Victorian opium den, which I imagine, of course, filled with colors, wafting fans, ornate pipes, exotic Chinese woman bringing you stuff as you recline among hallucinating pre-Raphaelite beauties and Lord Alfred Douglas.

But new multiple twist would appear to have made the story even more depressing as the War on Drugs falls over the War on Terror and then they both become hopelessly entangled in Bush’s War in Iraq. This story came from both aeswiren and Roger in Scotland (who hopes the Greenland Pump doesn’t fail – pump don’t fail me now, so to speak.)

Opium Fields Spread Across Iraq as Farmers Try to Make Ends Meet
By Patrick Cockburn
The cultivation of opium poppies whose product is turned into heroin is spreading rapidly across Iraq as farmers find they can no longer make a living through growing traditional crops. Afghan with experience in planting poppies have been helping farmers switch to producing opium in fertile parts of Diyala province, once famous for its oranges and pomegranates, north- east of Baghdad.
At a heavily guarded farm near the town of Buhriz, south of the provincial capital Baquba, poppies are grown between the orange trees in order to hide them, according to a local source.

Click for the rest of the tale.
The secret word is Laudanum

PLUS I rant in LA CityBeat for some few hundred words on last weeks Obama coke hoo-ha and though the website is still an intolerable dog’s dinner one can actually access the story.
Posted by Mick at 1/24/2008 07:30:00 PM 2 comments:

Charles Stross is an eminent science fiction author and also runs Charlie’s Diary, and excellent and superior blog. Recently he posted these examples of rightwing religious thinking, strip-mined from their own internet chat sessions. These are the ones to whom our would-be leaders grovel. These are the ones to whom Huckabee panders. You can laugh or your skin can crawl, but the final one can be nothing a symptom dangerous psychosis or actual deep seated evil. (Spelling is verbatim)

"I can sum it all up in three words: Evolution is a lie"

"One of the most basic laws in the universe is the Second Law of Thermodynamics. This states that as time goes by, entropy in an environment will increase. Evolution argues differently against a law that is accepted EVERYWHERE BY EVERYONE. Evolution says that we started out simple, and over time became more complex. That just isn't possible: UNLESS there is a giant outside source of energy supplying the Earth with huge amounts of energy. If there were such a source, scientists would certainly know about it."

"Jesus is not a Jew. Jesus was Jewish."
"all the evolutionists, tell me something. i know how the big bang "has happened, but tell me, wouldnt an explosion, especially one that size, take away life instead of allow it? think about it. ex: the a-bomb, the h-bomb, grenades, cannon balls (when fired from a cannon of course), mines, rocket launchers, and anything and everything in between. they all have taken lives."

"Everyone knows scientists insist on using complex terminology to make it harder for True Christians to refute their claims. Deoxyribonucleic Acid, for example... sounds impressive, right? But have you ever seen what happens if you put something in acid? It dissolves! If we had all this acid in our cells, we'd all dissolve! So much for the Theory of Evolution, Check MATE!"

The secret word is Crucify

Someone has posted a delightful clip of me holding forth a couple of years ago about the shambles that became the 1970 Isle of Wight rock festival. I kinda like being gratuitously on YouTube. (But a fund really does have to be established to get my teeth replaced. Kinda like restoring an old building.)
Posted by Mick at 1/23/2008 12:55:00 AM 2 comments:

LIFE WAS A LOT EASIER WHEN FASCISTS LOOKED LIKE FASCISTS 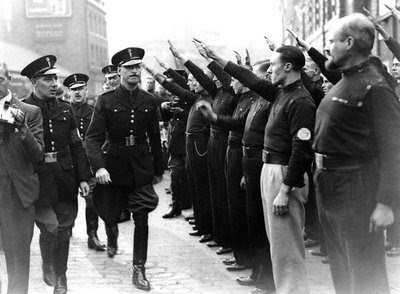 I’ve had a lot of writing to do of late so Doc40 has been heavy on links and pictures and kinda shy on original text, but I hope I’ll be able to air some of my obsessions very soon. In the meantime I was sent a link to a great web site called Nickel In The Machine (there's also a permalink on the right) that is an inspired amalgam of British rock and political history that is truly fascinating. I learned, for instance that Bram Stoker, author of Dracula, lived on Cheyne Walk, the same London street on which Mick Jagger had a residence a few doors down and more than half a century later. If you scroll down a bit, you find an account of The Battle of Cable Street when Sir Oswald Moseley and his blackshirts (above) – The British Union Of Fascists – attempted a mass march through the then Jewish ghetto of Whitechapel and were stopped in their tracks by Trade Union members, Communists, and just regular working people. Oh that we had such cohesion today, but like I said, it was easier when fascists looked like fascists, and not aging frat boys in expensive suits.

The secret word is Solidarity

AND, in total contrast, here’s a clip from Noudela that I find wonderfully restful. 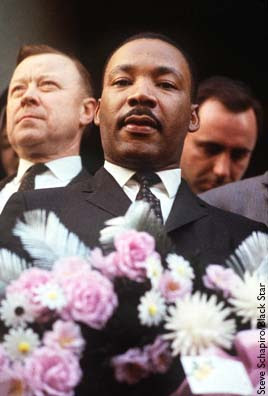 Really needs no other tribute beyond this.