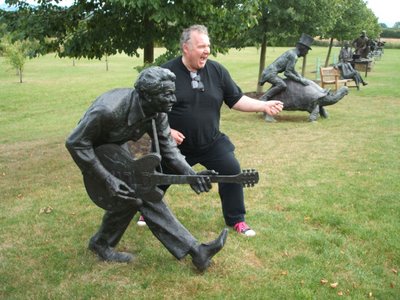 WHERE DOES THE TIME GO?
Back in the day, when Carnival meant police cars burning, it was a run down Ladbroke Grove spit and sawdust gin joint called the Princess Alexandra ("the Alex") with no customers apart from a small clutch of out-of-work, white trash, Nazi-looking hoods until a few of us – Boss Goodman, Lemmy, the late Edward Barker, Roger Hutchinson, and others claimed it as our refuge from the drug addled riffraff in the other pubs. Pretty soon it became the haunt of roadies, bikers, philosophers, and local highspeed lowlife, with amphetamine sulphate in the toilets and cocaine when the ladies could afford it. That was before the old neighborhood went Julia Roberts on us, and the Alex changed its name to The Portobello Gold, and headed up market. So far up market, that Bill Clinton has dined there, and, this weekend, (as advised by some girl) it turned up in the LA Times travel section in a story about affordable London. There is, however, one remaining link with the old days. Boss Goodman, pictured above with a statue of Chuck Berry (don’t ask) is now the chef at the Portobello Gold. Will someone tell him about this? Goodman is a Luddite with no computer.)
THIS is a friendly Notting Hill spot known for its excellent selection of wines by the glass. Like many English pubs, it has rooms above the bar, but the ones at this little place are far more cheerful, comfy and well-maintained than at others. All eight chambers — from the spacious, four-poster honeymoon suite to the twin-bedded backpacker room — are shipshape, with attached baths, telephones, television and wireless Internet access. A top-floor flat sleeps six, boasting a fish tank and private terrace with putting green. But the best buys are the four doubles on the third floor. They are decorated in warm yellows and beiges and have inviting duvets and big windows overlooking the back. The neighborhood, full of small junk and specialty shops, is where Hugh Grant fell for Julia Roberts in the 1999 movie "Notting Hill." Saturday mornings bring the famous Portobello Road thrift market to the pub's front door and, in late August, the wild Notting Hill Carnival passes by.
Portobello Gold, 95/97 Portobello Road, Notting Hill; 011-44-207-460-4910, http://www.portobellogold.com 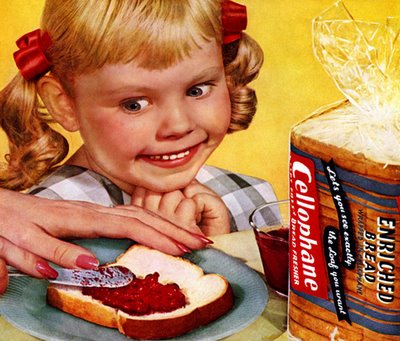 The secret word is Jam 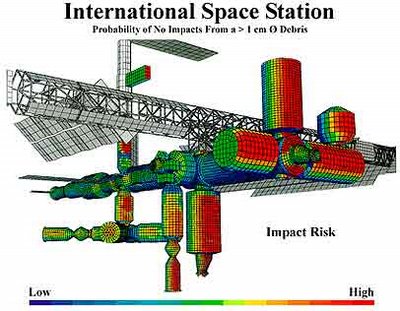 This long-for-a-blog piece by Keay Davidson in the SF Chronicle was sent over by MrMR who knows I like this kinda thing and probably figured that I would shamlessly reproduce it in full. Not only does it detail all the crap we’re dumping into low orbit, but also talks about my favorite piece hardware I’ll never live to see – the Space Elevator.

Space Clutter -- An animated illustration of radar-tracked space junk circling Earth can be found at www.aero.org/capabilities/cords/