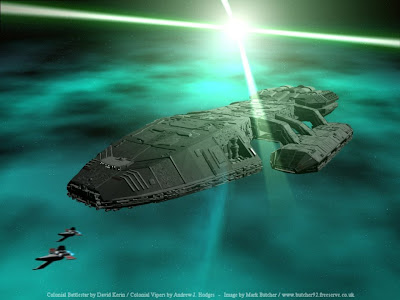 I’m hoping it’s symbolic of an improving world. Battlestar Galactica is back on the Sci-Fi Channel and Friday night becomes endurable. Needless to say, though, the news is not all good. After fleeing the Cylon menace for god knows how many episodes, the remnants of humanity find their way to Earth, only to discover the legendary homeworld is global nuclear toast. And as if that wasn’t bad enough, this is the final season. I am really getting pissed off with these auteur TV shows that coyly quit while they're ahead. First The Sopranos, then Deadwood and now Battlestar Galactica. Thank heavens for South Park.

The secret word is Frak

If these reports are even close to being true, the Israelis have overstepped all bounds of civilized warfare. (If that, in itself, is not an oxymoron.)

Reuters
“A warehouse in a U.N. compound in Gaza that came under Israeli fire on Thursday was apparently hit by white-phosphorus shells, U.N. humanitarian affairs chief John Holmes said. "The main warehouse was badly damaged by what appeared to be white-phosphorus shells," Holmes told reporters at a news briefing in New York. "Those on the ground don't have any doubt that's what they were. If you were looking for confirmation, that looks like it to me."

BBC:
“Human Rights Watch says it has observed "dozens and dozens" of white phosphorus shells being fired by Israel at the Gaza Strip - a heavily populated civilian area where its use is prohibited.
Palestinian medical officials said they had treated large numbers of casualties with unusual burns that were extremely painful to treat and could be consistent with exposure to white phosphorus.”

The Times of London
“The Israeli military has denied using white phosphorus shells in the Gaza offensive, although an investigation by The Times has revealed that dozens of Palestinians in Gaza have sustained serious injuries from the substance, which burns at extremely high temperatures. The Geneva Convention of 1980 proscribes the use of white phosphorus as a weapon of war in civilian areas, although it can be used to create a smokescreen. The Israel Defence Forces (IDF) said today that all weapons used in Gaza were "within the scope of international law."

The New York Times
“Luay Suboh, 10, from Beit Lahiya, lost his eyesight and some skin on his face Saturday when, his mother said, a fiery substance clung to him as he darted home from a shelter where his family was staying to pick up clothes. The substance smelled like burned trash, said Ms. Jaawanah, the mother who fled her home in Zeitoun, who had experienced it too. She had no affection for Hamas, but her sufferings were changing that. 'Do you think I'm against them firing rockets now?' she asked, referring to Hamas. 'No. I was against it before. Not anymore.'”

AFP
“Medics in Gaza say they have treated more than 50 people suffering burns caused by controversial white phosphorus shells, a claim backed up by a report of the New York-based Human Rights Watch. And two Norwegian doctors, recently returned from working in the Gaza Strip, accused Israel of using the territory as a testing ground for a new "extremely nasty" type of explosive.”
Posted by Mick at 1/16/2009 03:27:00 PM 6 comments: 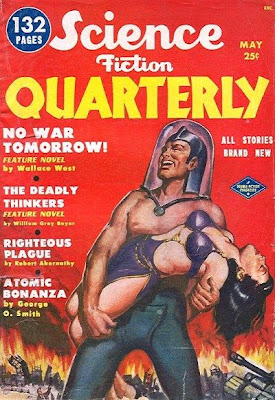 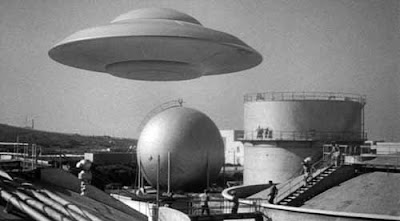 Uncle Bill leaves the planet, but doesn't tell anyone where he's going or when he'll be back.

THEY DON'T STAGE SHOWS LIKE THIS ANY MORE #12A 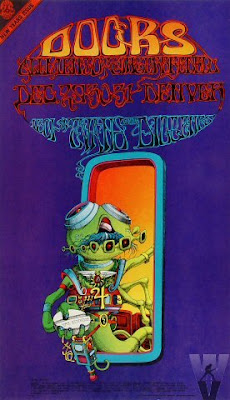 And they don't design posters like the great Rick Griffin, either.

The secret words are Pay Attention 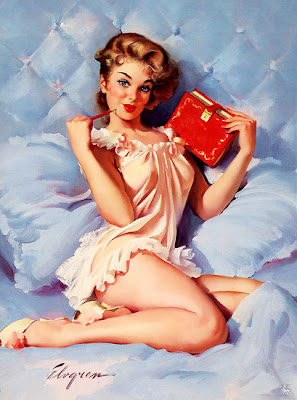 THE MARILYN MEME IS SPREADING 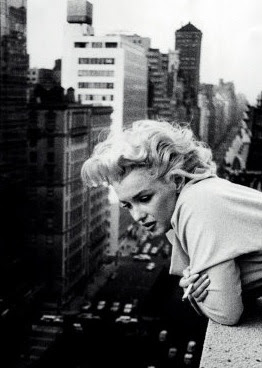 Forgive the self-congratulation, but last night, on The Colbert Report, Stephen Colbert launched into a convoluted faux-conspiracy theorist rant that concluded, “…Marilyn Monroe disguised herself as Howard Hughes and flew the Spruce Goose into the JFK motorcade.” Of course, it was spoken and not written in pink type, but it would seem that the Marilyn meme, as instigated by Doc40’s ongoing series of weird, disjointed, multi-reality Flash-Gordon-on acid snatches of fiction around ancient and retro photos of Marilyn Monroe is spreading. Which causes me to think hard about what might be happening here. Could it be that, instead of promoting global utopian revolution, we find ourselves simply spreading conceptual weirdness. Or maybe, somewhere deep in the sub-conscious culture, they are one and the same.

“I knew I belonged to the public and to the world, not because I was talented or even beautiful, but because I had never belonged to anything or anyone else.” – Marilyn Monroe

THIS MUST HAVE BEEN A VERY ODD MAGAZINE #2 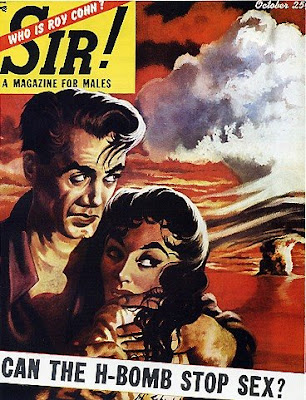 Back on December 19th of last year, Doc40 ran a reproduction of a cover from the quite extraordinary Sir magazine from the 1950s. Since then, others have crossed our threshold, and this is one of the more sensational. I don’t know if the H-bomb can "stop sex", but I do know that a thermo-nuclear strike can spoil one’s entire day.

The secret hyphenation is Ka-Boom 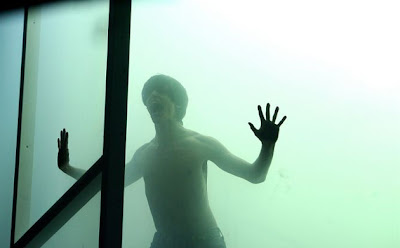 Our pal Arsyd sent over a audio link to a somewhat unusal version of the song “Lost Johnny” that Lemmy and I wrote way back in the twenieth century. It’s by the German/Dutch rock/experimental group Tohuwabhu, who, some time ago, covered the Tijuana Bible tune “Memphis Psychosis.” (And who feature a rock & roll accordion.) Click here to take a listen.
Posted by Mick at 1/13/2009 05:08:00 PM 9 comments: 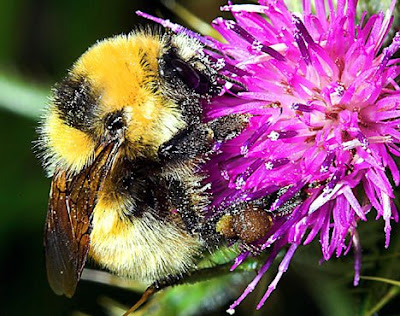 Our pal Aeswiren has sent us this update…

Cocaine triggers reward pathways in the human brain and is toxic at high doses; it is postulated to have evolved as an insecticide that protects the coca plant. Barron et al. have tested the response of honey bees to cocaine and find suggestive evidence of a reward effect at low doses. By examining the honey bee dance--the means by which bees signal the availability of resources to their hive-mates--they found that dosing the bees with cocaine increased both the likelihood and rate of dance after foraging; furthermore, the bees exhibited behavior consistent with a withdrawal effect when the drug was withheld after chronic treatment. The authors conclude that responsiveness and signaling in the appropriate settings were increased by the treatment with cocaine, suggesting that the response to the drug may be similar in humans and bees.”

The secret word is Hexagram 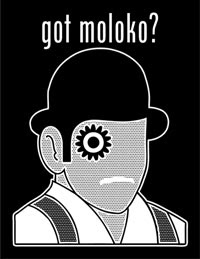 THE PENTAGON AT WORK 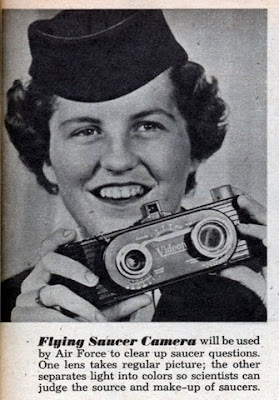 So when do we see the photos?

THE ADVENTURES OF MARILYN (Part 455) 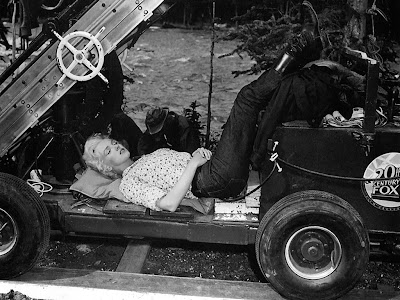 In which Marilyn, during the siege of Arkham, has been operating alone behind enemy lines – without control, back-up, or any clear means of extraction – using her goddess powers of persuasion to spread disaffection among the rank and file invaders. When finally exhausted from her efforts, she lies down to take a fast power-nap on the wheelbase of one of the Fox war machines. Her reasoning is simple. Wasn’t it the very last place that they would look for her?

IT'S SUNDAY AND THIS IS A FRIED EGG... 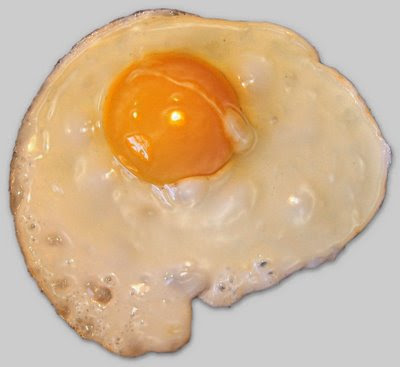 ...AND IT'S LOOKING AT ME LIKE A BLOODY CYCLOPS!

(Lifted from Siblingshot on an afternoon when my gravity has definitely failed and I’m waiting for the negativity to pull me through.)
The secret word is Indolent
Posted by Mick at 1/11/2009 05:33:00 PM 4 comments: 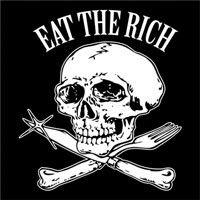