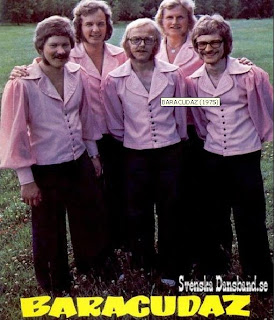 Our pal Doug the Bass sent over the following note and a culturally alarming link to pictures of Abba-era Swedish dance bands that have to be seen to be believed. “OK, my friend Chrissy Shefts sent me this link. No wonder why ABBA never broke big in the States. Truly hilarious and frightening...” Maybe this is why death metal is now so popular up in the fiords. And doubtless the Republicans (if we had any) would point out that all this retro-scand is, in fact, a symptom of the hell that is created by the satanic horror of socialized health care. (But then ask them to find Sweden on a map.)

The secret hyphenation is Bork-Bork

NO MORE WORRIES ABOUT BARS 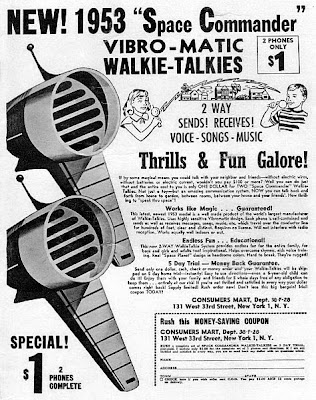 A FUTURE WITHOUT DETROIT? 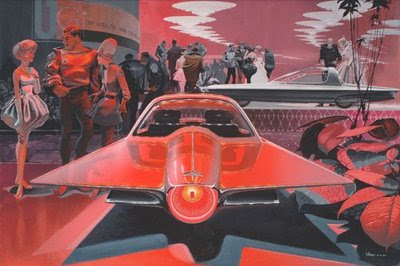 The suits of the motor industry are without shame or even a sense of theatre. They show up in Washington in their private jets, with their seven and eight figure salaries, and expect the government to spot them a fast $25 billion, under the old George Bush socialism-for-the-mega-rich safety net. These clowns haven’t made a decent car since the Dodge Challenger, and they drove Detroit into the ground as their unholy alliance with the oil barons produced vehicles that were nothing more than heavily promoted, two-ton chunks of gas-guzzling ugly metal, but they still have the infinite and unmitigated gall to give the nod and wink to their Republican toadies to bounce all over my TV claiming that the destruction of the big three automakers is all the fault of the UAW and shiftless workers with too much healthcare. I totally believe that Ford, GM, and Chrysler should get their bailout ASAP, but on the solid proviso that current management is immediately taken out back and executed by a union firing squad.

The secret word is Drastic 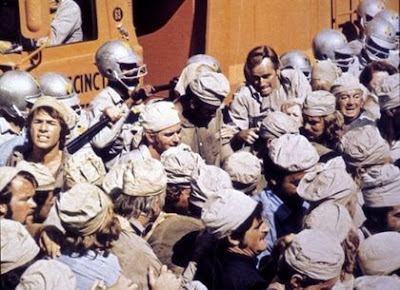 The only difference between Soylent Green and Burger King is TV commercials and cheap promotional toys. (Have it your way.) 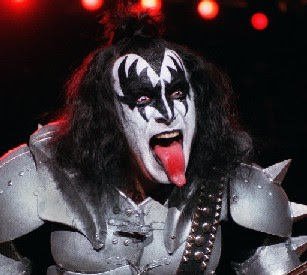 Today Gene Simmons – currently hawking a reality show, and every kind of Kiss merch he thinks he can get away with, from Kiss condoms to Kiss coffins – rang the opening bell at the New York Stock Exchange. The Dow promptly plunged more than four hundred points to yet another record low. I think it’s time to disband the Kiss Army.
Posted by Mick at 11/19/2008 08:22:00 PM 4 comments: 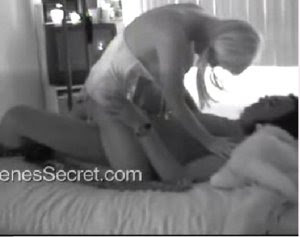 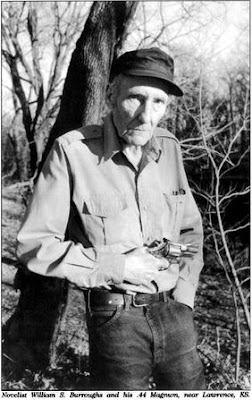 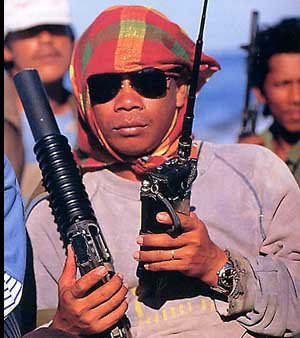 When I read this story in the New York Times, I have to admit that I was intrigued and delighted. Okay, so some would claim this is some kind of terrorism, but all I can do is smile. These Somali pirates have the Devil’s own gall to highjack a fully loaded Saudi oil tanker the size of a goddamned aircraft carrier, and are definitely plying what the epic Victorian poet, Sir Henry Newbolt, called the “Old Trade.” Not only do they represent a kind of Waterworld phase in the steady slide to global cyberpunk dystopia, but I have to sympathize with their audacity. The entire British Empire was founded on the proceeds of piracy, and the Golden Age of Elizabeth I and William Shakespeare was only bankrolled by robbing the Spanish.

“A hijacked Saudi-owned supertanker carrying more than $100 million worth of crude oil was anchored off the coast of Somalia on Tuesday and the ship’s owner said it was working to free the ship and its 25-member crew.
The owner, Vela International, a subsidiary of the Saudi Arabia-based oil giant Saudi Aramco, said in a statement that the company was awaiting further contact from the pirates who seized the vessel about 480 miles off the coast of Somalia. Earlier reports had said that the 1,080-foot-long ship, Sirius Star, had been hijacked off the Kenyan coast.
The company did not say specifically that it had begun negotiations with the hijackers. The supertanker, about the same length as an American Nimitz class aircraft carrier, is the largest ship known to have been seized by pirates, and it was fully loaded with two million barrels of oil.
“Our first and foremost priority is ensuring the safety of the crew,” Salah B. Ka’aki, the president and chief executive of Vela, said in the statement. The crew members are citizens of Britain, Poland, Croatia, the Philippines and Saudi Arabia.
Lt. Nathan Christensen, deputy spokesman for the United States Fifth Fleet, said that the tanker had been anchored within sight of the coastal town of Xarardheere. The town is 260 miles north of Mogadishu, the Somali capital, and is part of a region known as a hub of pirate activity.” (Click here for more.) 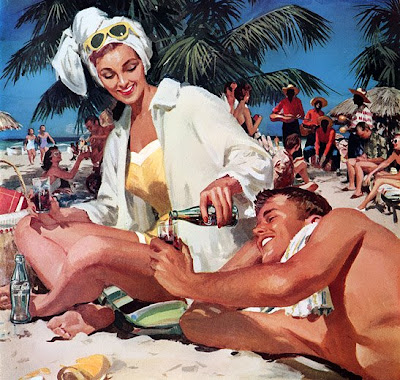 No, this is not any tall tale of Peruvian paranoia powder, but actually about my lifelong addiction to Coca-Cola. (I guess it’s one of those things that float through the mind in this weird lull between the Obama election and the End of Civilization As We Know it, and as LA is once again, almost tediously, on fire.) Some recent posters of comments on Doc40 seemed to find this either distasteful or wholly unbelievable, but it is the truth and I refuse to succumb to shame, especially as others seem to share and understand my supposedly imperialist weakness.
I met my first Coke in England when I was somewhere around the age of four. My mother and a friend had taken the tiny Michael to a somewhat smart restaurant, and, by a process that I don’t really recall, I found myself looking at a tall glass of brown sparkling liquid with ice and a slice of lemon. Much of this may be clouded by memory distortion My first though was “wow, I’m getting a cocktail of my very own”, and then I tasted the thing and that was it. That first Coke was infinitely superior to the weird domestic soda-pops like Tizer, Vimto, ginger beer, or dandelion & burdock. I became a lifelong slave to the Bottlers of Atlanta, and totally understood how precise the commercial was that made reference to “an ice cold coke on the back of my throat.”
Not that just any Coke would do. Forget your plastic two-liter bottles. Coca-Cola should come super-chilled in the traditional waisted bottle, with a tightly sealed crown cap. The only other acceptable Coke delivery system is from a commercial spigot machine with the refrigeration and CO2 turned way up, and the syrup tuned down. I discover this as a teenager when I worked at London Zoo as a fry cook and frequently stumbled into work flying sideways from the previous night’s dose of blue or yellow mod pills.
Thus, to make a long story bearable, the ideal hangover cure has always been a Coke with the taste dulled by extreme cold and the caffeine forced into my system by the maximum possible carbonation. Around the same time, I was clued into the joys of Coke and alcohol by Fidel Castro (the Cuba Libre) and The Beatles (scotch and coke), but that's a whole other story that concludes with why I like to drink Jack Daniels and Coke on airplanes.

And now for some trivia from Wikipedia…
"In the United States, Stepan Company is the only manufacturing plant authorized by the Federal Government to import and process the coca plant. Stepan laboratory in Maywood, New Jersey, is the nation's only legal commercial importer of coca leaves, which it obtains mainly from Peru and, to a lesser extent, Bolivia. Besides producing the coca flavoring agent for Coca Cola, Stepan Company extracts cocaine from the coca leaves, which it sells to Mallinckrodt, a St. Louis, Missouri pharmaceutical manufacturer that is the only company in the United States licensed to purify cocaine for medicinal use."

The secret word is Better

THE ADVENTURES OF MARILYN (Part Five-Oh) 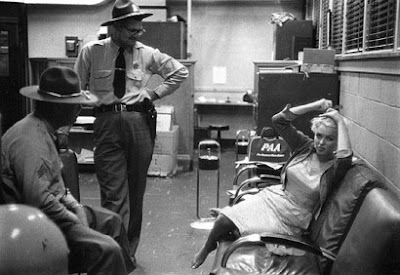 In which Marilyn, stranded by the total inefficiency of Post-Apocalypse Airlines and missing her shoes, finds herself confined in the backroom of the Happy Skull Casino and Roadhouse, guarded by two very stupid deputy sheriffs from Parsec 19347494738/W – also know as the Exceptionally Dumb Dimension – that has an economy based on implausibly fixed gambling and ancient pork, and a political structure of down-home, beer-drunk fascism. Knowing this is not a happy situation, and these hick cops are wholly unaware of her Goddess Status, she employs the only tactical alternative left in her arsenal. She ignores them in the hope that they will vanish. 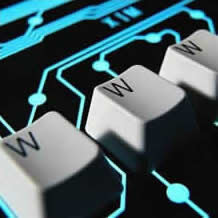 Our good pal Faux Smoke, between arguing with Aeswiren about nuclear power, sent us the following comment about internet freedom.

“Big deal to me, internet becomes useless if our free access becomes restricted. Fucking Comcast was blocking torrent sites earlier this year & the new bandwidth caps have already knocked some people I know offline... things haven't exactly been peachy the way things have been going & it would be nice to see things play out in a favorable fashion as the new administration gets into office.”

He also includes a link to a report on the latest government moves on internet freedom.