CHE IS STLL WITH US 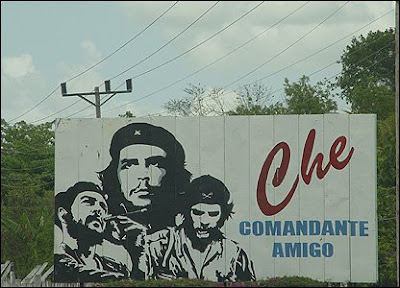 In this week’s LA CityBeat I have a reflection on how the image of Che Guevara (perhaps as a symbol of global resistance) is still potent after more than forty years. (Click to read.)

POPE DIGS EBEs THE MOST 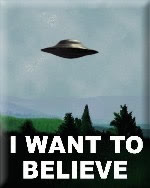 Elf Hellion sent over the following, and it makes me very happy that the Catholic church is okay with aliens. But I worry somewhat that an underlying motive might be that the greys do kind of resemble a fetus.
"VATICAN CITY -- The Vatican's chief astronomer says that believing in aliens does not contradict faith in God. The Rev. Jose Gabriel Funes, the Jesuit director of the Vatican Observatory, says that the vastness of the universe means it is possible there could be other forms of life outside Earth, even intelligent ones. In an interview published Tuesday by Vatican newspaper L'Osservatore Romano, Funes says that such a notion "doesn't contradict our faith" because aliens would still be God's creatures." (For the full story) 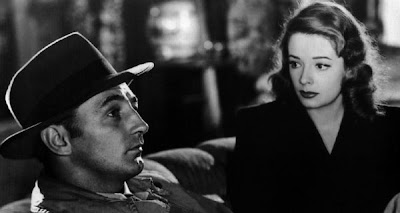 “I mean, wouldn’t you want to see a woman president?”
But Bob said nothing.

And if you’re wondering why Doc40 hasn’t joined the Democratic primary fray, it’s because the total saturation of the news media is becoming, to say the very least, fucking tired. I just wish it was January 2009, Barack Obama was being inaugurated, and George Bush indicted.
Posted by Mick at 5/15/2008 01:31:00 AM No comments:

ON HER MAJESTY'S OCCULT SERVICE 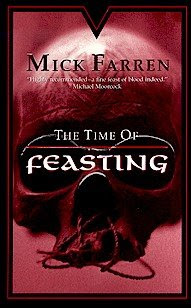 In the Renquist Quartet – my four-novel cycle centered around the character Victor Renquist, the debonair, erudite, thousand year-old vampire – I made numerous references to how Renquist, at various times in his long nosferatu existence, hired on with the occult divisions of a number of intelligence agencies, from the sixteenth century creation of Queen Elizabeth I’s spymaster Sir Francis Walsingham to a World War II group formed by Winston Churchill to mess with Adolf Hitler and the Nazis’ Aryan paranormality. All of this came from my own fevered imagination (plus maybe a bit of borrowing from Dennis Wheatley) but now I discover that there are folk out there who make a serious historical case for it all being real. (Except, of course, for the dark eminence of Renquist.) All of which makes me all the more determined to delve into an investigation of morphogenetic fields (see yesterday) or, at least, pseudo- morphogenetic fields.


The secret word is Cryptoid 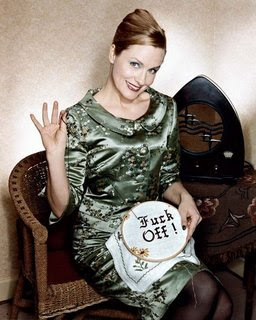 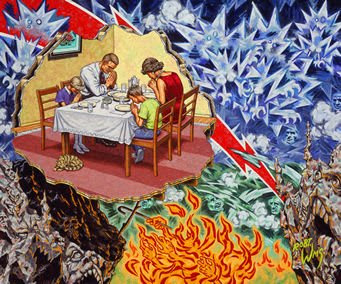 “Morphic resonance is a term coined by Rupert Sheldrake in his 1981 book A New Science of Life. He uses the expression to refer to what he thinks is "the basis of memory in nature....the idea of mysterious telepathy-type interconnections between organisms and of collective memories within species."Sheldrake has been trained in 20th century scientific models--he has a Ph.D. in biochemistry from Cambridge University (1967)--but he prefers Goethe and 19th century vitalism. Sheldrake prefers teleological to mechanistic models of reality. Rather than apply his scientific knowledge and training to, say, trying to develop a way to increasecrop yields or a way to heal the sick, he prefers to study and think in terms outside of the paradigms of science and inside the paradigms of the occult and the paranormal. One of his books is entitled Dogs That Know When Their Owners Are Coming Home: And Other Unexplained Powers of Animals. One of his studies is on whether people can tellwhen someone is staring at them. (He says they can; others have been unable to duplicate his results.*) Another tests the telepathic powers of a parrot. He prefers a romantic vision of the past to the bleak picture of a world run by technocrats who want to control nature and destroy much of the environment in the process. In short, he prefers metaphysics to science, though he seems to think he can do the former but call it the latter. Perhaps it would be fairer to say that he sees no borderline between science and metaphysics.'Morphic resonance' (MR) is put forth as if it were an empirical term, but it is no more empirical than L. Ron Hubbard's 'engram', the alleged source of all mental and physical illness. The term is more on par with the Stoic's notion of the logos. Bergson's notion of the élan vital, or Plato's notion of the eidos than it is with any scientific notion of the laws of nature. What the rest of the scientific world terms lawfulness--the tendency of things to follow patterns we call laws of nature--Sheldrake calls morphic resonance. He describes it as a kind of memory in things determined not by their inherent natures,but by repetition. He also describes MR as something which is transmitted via "morphogenetic fields." This gives him a conceptual framework wherein information is transmitted mysteriously and miraculously through any amount of space and time without loss of energy, and presumably without loss or change of content through something like mutation in DNA replication. Thus, room is made for psychical as well as physical transmission of information. Thus, it is not at all necessary for us to assume that the physical characteristics of organisms are contained inside the genes, which may in fact be analogous to transistors tuned in to the proper frequencies for translating invisible information into visible form. Thus, morphogenetic fields are located invisibly in and around organisms, and may account for such hitherto unexplainable phenomena as theregeneration of severed limbs by worms and salamanders, phantom limbs, the holographic properties of memory, telepathy, and the increasing ease with which new skills are learned as greater quantities of a population acquire them.*While this metaphysical proposition does seem to make room for telepathy, it does so at the expense of ignoring Occam's razor. Telepathy and such things as phantom limbs, for example, can be explained without adding the metaphysical baggage of morphicresonance. So can memory, which does not require a holographic paradigm, by the way. The notion that new skills are learned with increasing ease as greater quantities of a population acquire them, known as the hundredth monkey phenomenon, is bogus.In short, although Sheldrake commands some respect as a scientist because of his education and degree, he has clearly abandoned conventional science in favor of magical thinking. This is his right, of course. However, his continued pose as a scientist on the frontier of discovery is unwarranted. He is one of a growing horde of "alternative" scientists whose resentment at the aspiritual nature of modern scientific paradigms, as well as the obviously harmful and seemingly indifferent applications of modern science, have led them to seek their own paradigms in ancient and long-abandoned concepts. These paradigms are not new, though the terminology is. These alternative paradigms allow for angels, telepathy, psychic dogs, alternative realities, and hope for a future world where we all live in harmony and love, surrounded by blissful neighbors who never heard of biological warfare, nuclear bombs, or genetically engineered corn on the cob.”

The above was sent by Elf Hellion and, while still digesting most it, an idea threatens to take form in the swirling mist that this could be a factor in one hell of a monster creative adventure if one could tap into a "morphogenetic field", or even synthesize one, mayhap? Keep watching this quadrant of the skies. We have nothing to lose but our brains. 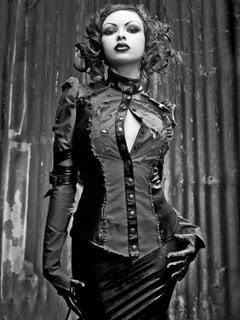 “I have had quite enough of all this nonsense about lipstick in space. There is only one place for lipstick.” 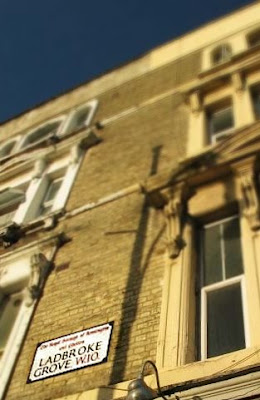 A few years ago, I started working on a compilation CD project that was intended to showcase the best and most bestial bands that came out of my old neighborhood – London’s notorious Ladbroke Grove – during its pre-gentrification heyday between the psychedelic late 1960s and the punk rock of the late 1970s. Sadly, before the collection could be completed, my contact at Sanctuary moved on and the idea was shelved. I thought that was the end of one more cunning scheme that never quite took flight, but, as luck would have it, our old pal Nigel Cross breathed new life into the concept, and it has now come to fruition in the form of a double CD titled Cries from the Midnight Circus – Ladbroke Grove 1967-78, and includes tracks by, among others, the Pink Fairies, Hawkwind, the Pretty Things, Sam Gopal, Mick Farren and the Deviants, Tomorrow, Motorhead, Mighty Baby, High Tide, the Action and Misunderstood, Steamhammer, Cochise, Bob Calvert, the redoubtable Michael Moorcock, and many, many more.

A glowing review can be found on Phil McMullen’s Terrascope Online – plus a link to Nigel’s excellent booklet notes – and, if that wasn’t enough, Nigel emailed me that the 2CD set had been nominated for best compilation album for the 2008 Mojo Awards. Ain’t we the business? 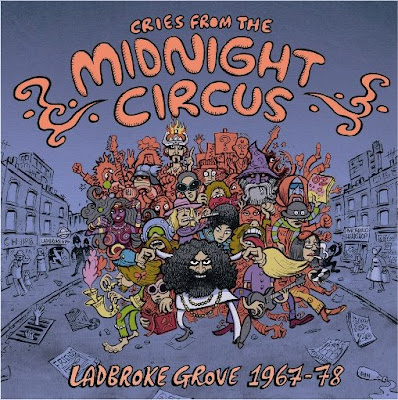 And while we’re all stroking our egos, Suzy from Bomp forwarded the following from a character called Snogsdog. “It was when I heard Mick Farren /Deviants /Fairies /Kim Fowley, etc [late 70's] when I was around 12 -14 years old that I realized that I wasn't alone on this rock in space anymore...and that's the truth...so I always owe a million thanks especially to Mick for that..."

The secret word is Smug