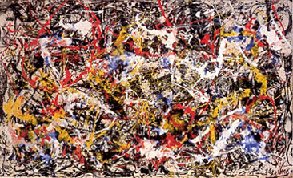 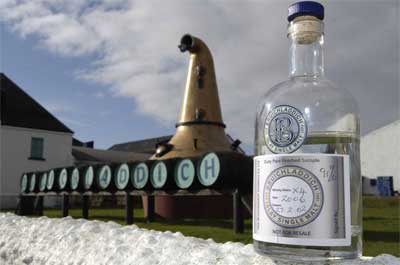 THE WORLD’S MOST ALCOHOLIC SINGLE MALT
The small designer distillery Bruichladdich have developed what they claim is the world’s strongest single malt Scotch, using a 300 year-old quadruple distilling process to create "usquebaugh-baul" - Gaelic for ‘perilous whisky’. The spirit run started at 11.30 on Monday the February 27th. The whisky first ran at 92% down to 88% which will make an average of about 90%. Master Distiller Jim McEwan reported, "On entry the flavor is cool, fizzy, citrus - lemon and honey, then the taste of soft gooseberry and pear in syrup evolve as it glides across the palette with cereal and toasted muffins in the slipstream. There is no evidence of the power at this stage because the viscosity is almost like glycerine, however as it engages the taste receptors at the back of the tongue it really hits the booster button and an amazing heat floods deep into the chest. It’s brilliantly fresh and fizzy with an extremely pleasant afterburner effect and leaves an aftertaste that is superb, not long but unforgettable." And then, of course, it knocks you on your ass.

http://www.bruichladdich.com/
(The obvious next move would be for some grateful reader to send the old Doc a bottle of this perilous so he can test it out on his own taste receptors, and write about. Unless, of course, it kills him in the process.)

The secret word is Stagger

CRYPTIQUE – He drank himself to death but only with the good stuff. 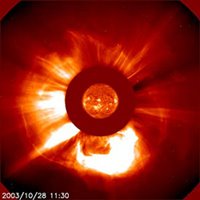 TAKE TO THE HILLS, WE’RE DOOMED!!
PART XI
HCB sent over the following piece of bad news about solar storms which is something we unfortunately can’t blame on George Bush. (But maybe say goodbye to all this and your cell phone too.)

BEIJING, March.8 (Xinhuanet) -- Scientists announced Monday that increasingly severe solar storms are likely to take place in the next 11 years. When the solar cycle reaches its peak in 2012, it will hurl at Earth mammoth solar storms with intense radiation and clouds of high-speed subatomic particles millions of miles across, which could short-circuit a world increasingly dependent on giant utilities and satellite communications networks, scientists warned. The solar storms in the past have knocked out huge power grids and screwed up global electronics and data communications, but "the next sunspot cycle will be 30 to 50 percent stronger than the last one," the scientists said in Monday's statement. Monday's forecast was announced by scientists from agencies including NASA and the National Science Foundation, based on research centered at the National Center for Atmospheric Research in Colorado. There is disagreement on exactly when the new cycle will begin. One researcher predicted that the cycle will likely start in late 2007 or early 2008 while another said it could begin as either as late this year. But they did agree that the most severe storms won't begin popping on the solar surface for several years, but when they do, they'll be huge. Solar storms can happen at any time during an 11-year solar cycle. However, by far the worst storms are likeliest to occur during the period known as "solar maximum," or solar max for short. The last solar max was in 2001.

And it all ties in somewhat uncomfortably with the Mayan/Terrence McKenna contention that absolutely everything will be snuffed in 2012. 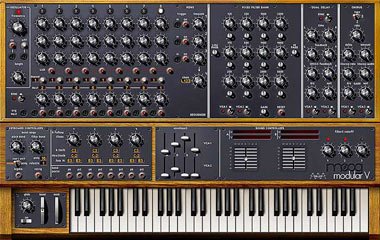 The secret word is Binary

CRYPTIQUE – And if you don’t believe me, ask Fred Nietzsche 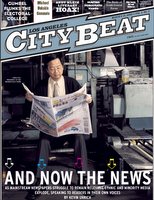 MO’ BETTER CITYBEAT
I have a new bit in LA CityBeat about how the mainstream media still treat the geothermal destruction of the planet as some hilarious old Earth-shoe hippie joke. Plus there’s a hell of a letter from Sam Krueger if you click onto the letter's page.
http://lacitybeat.com/article.php?id=3408&IssueNum=144

A DOC40 PUBLIC SERVICE ANNOUNCEMENT
You can send your wire coat hangers and knitting needles to:
Office of the Governor, 500 E. Capitol Ave., Pierre, SD 57501

CRYPTIQUE -- Maybe we men should just shut the fuck up? 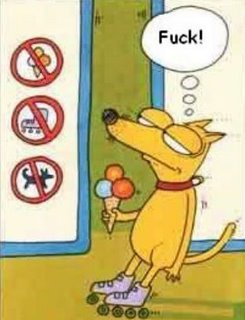 THE WAR STARTS FOR REAL
The near-total ban on abortions in South Dakota, just signed into law by Republican Governor Mike Rounds, is not only, as he calls it, a "direct frontal assault" on Roe v Wade, but also the source of one hell of an hysterical smokescreen in an election year when the Republicans should be called to account for their Rein of Ruin.
Incidently, South Dakota has a state average IQ of 90 and is ranked 45 out of 50 in national intelligence. An IQ range of 80-90 is classified as "dullness". For the full story
http://www.msnbc.msn.com/id/11710758/

Some girl also sent over a brilliant bit by Molly Ivins, and, in the accompanying email, comments, "i think my favorite part is where the asshat talks about what would be an acceptable "life of the woman" exception for a rape case: apparently it would have to include sodomy. which, as everyone knows, doesn't lead to pregnancy. but i'm sure he enjoyed coming up with the scenario."
http://www.cnn.com/2006/POLITICS/03/07/ivins.abortion/

WHILE ON A LIGHTER NOTE (AND FUCK KNOWS WE NEED ONE) SOME VIDEO HILARITY...
The live action Simpsons
http://youtube.com/watch?v=49IDp76kjPw 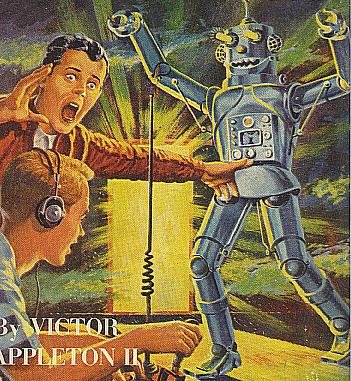 BEWARE THE ROBOT AUTHOR
Some girl sends over an link to the story of the LongPen, a robot substitute for authors who don’t want to do book signings.
http://news.yahoo.com/s/ap/20060306/ap_on_hi_te/books_novel_invention
I really hate this device. And authors who think book tours are just too, too tedious and they'd like to send a robot instead. Signings, unless you’re a superselling Clinton or Stern, are a chance to meet and talk to the people who actually read your damn books. They're the ones who really count, and I also believe there's an atavistic something in that the book has actually been touched by whoever wrote it. A pox on Atwood and her infernal machine. 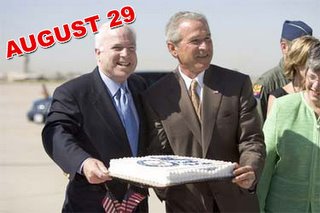 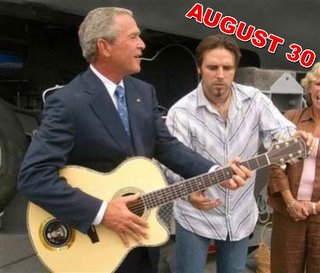 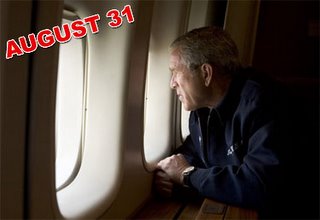 EVERY PICTURE TELLS A STORY (Don’t it?)
The old maxim about pictures and a thousand words would make these three a short and damning essay.

Could the time be right for one more picture?

The secret word is Criminal 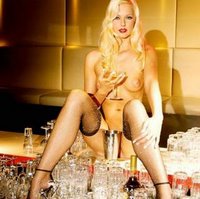 THE CHIC GET CHIC AND THE POOR GET FATTER
HOGWATCH 2
Lever sends a full list of what Oscar celebs got in their gift bags. (see small comments for yesterday)
http://abcnews.go.com/GMA/Oscars2006/story?id=1686854&page=1

MEANWHILE...
The number of overweight children worldwide will increase significantly by the end of the decade, and scientists expect profound impacts on everything from public health care to economies, a study published Monday said. http://www.msnbc.msn.com/id/11694799/ 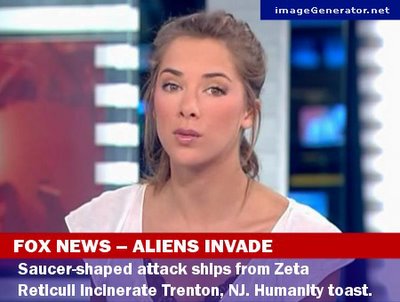 THE MADNESS OF KING BILL
MrMR sends this compassionate note – "So here's a special plea. Whatever you do, please DO NOT call Bill O'Reilly at 1-877-9-NO-SPIN from noon to 2 PM Monday through Friday and mention Keith Olbermann. Because you don't want to get in trouble with Fox security. And you don't want poor Bill's head to explode, do you?"
(see last Friday)
Posted by Mick at 3/06/2006 08:02:00 PM No comments: 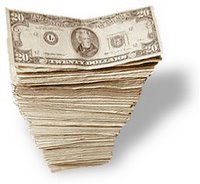 HOGWATCH
The gift bags handed to the presenters on today’s Academy Awards show are worth an estimated $100,000 each, which, is what? Between three and four times the annual income of a McDonalds employee? This is all getting a bit Louis XVI for me, but no one else seems to find it all that troubling. Am I alone in this? 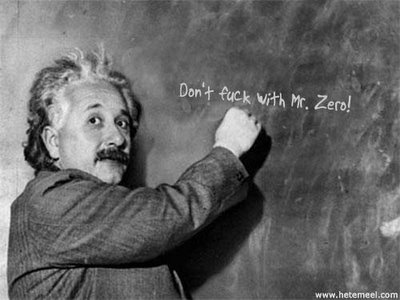