SOMETHING TO READ ON A WARM SATURDAY 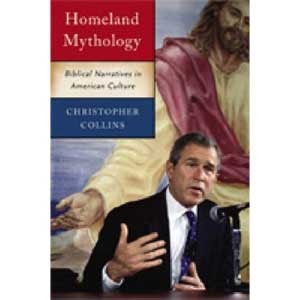 I don’t usually pass along book reviews, but since our pal Bernard sent me this, and I found it really fascinating and now want to get the book (or some grateful reader could send me one as a gift) I figured I’d make an exception. And also the temperature in LA is rising, and soon even Finn the cat will be walking slow.

“We can put it like this: the Christian Right has diabolically fused biblical storylines, which are generally socially retrograde in the first place, with an updated, inspired jingoism, laced it with an extract from the conservative beliefs of Puritans and Southern slaveholders, and secreted it as a poison into the bloodstream of the American polity. Such at least is the thesis of a recent book by Christopher Collins, called Homeland Mythology: Biblical Narratives in American Culture, which can be usefully paired with the Revs of the Morrow: New Poems by Ed Sanders, which prepares something of an antidote to this toxin by drawing on alternate sources of historical tradition and offering down-home guides to living.” (Click for the whole thing) 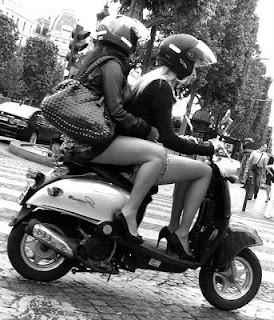 Lois and Matilda – the daughters of Palindrome (Bobob) Frozdick – have motorized their mission. (And, along their predetermined course, they may pass…)
Posted by Mick at 7/11/2009 05:41:00 PM No comments: 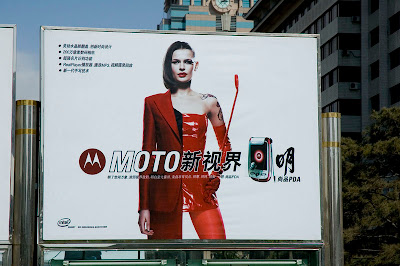 WE’RE DUMBER THAN WE THINK WE ARE 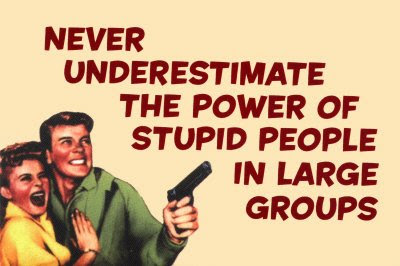 “And while almost all of the scientists surveyed accept that human beings evolved by natural processes and that human activity, chiefly the burning of fossil fuels, is causing global warming, general public is far less sure.
Almost a third of ordinary Americans say human beings have existed in their current form since the beginning of time, a view held by only 2 percent of the scientists. Only about half of the public agrees that people are behind climate change, and 11 percent does not believe there is any warming at all.
According to the survey, about a third of Americans think there is lively scientific debate on both topics; in fact, there is no credible scientific challenge to the theory of evolution and there is little doubt that human activity is altering the chemistry of the atmosphere in ways that threaten global climate.” Click here for the whole sad story.

NIKOLA TESLA, ON THE OTHER HAND, WAS SMARTER THAN JUST ABOUT EVERYBODY 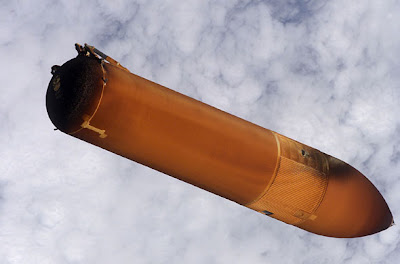 The venerable website Funtopia is in temporary cyber-limbo malfunction, but we are assured a rescue mission is already being mounted.
Posted by Mick at 7/09/2009 05:23:00 PM No comments:

THE MAN WHO GAVE US VIETNAM IS DEAD 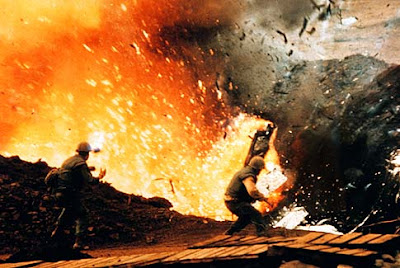 The death of Former Defense Secretary Robert McNamara at 93 should hardly pass without mention. McNamara was one of the key architects of the Vietnam war, which killed at least three million Vietnamese, around one million Cambodians and Laotians, and 58,000 American soldiers. McNamara was scum, and he remains scum in my estimation despite a mea culpa a few years. Here’s a short film about the SOB, with my favorite historian Howard Zinn. Click here. (Can’t write much today. I have to work.)
The secret word is Beaucoup
Posted by Mick at 7/08/2009 10:40:00 PM 3 comments: 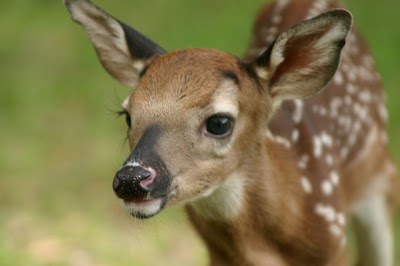 You gotta watch this. It’s a quintessential junk-news paradox. How do you handle the story of how a little old lady beat an adorable baby deer to death with a shovel? And what does it say about how – just maybe – we get the media we deserve. Click Here.
Posted by Mick at 7/08/2009 10:26:00 PM No comments:

IN LA TODAY, SOMEONE ELSE DIED 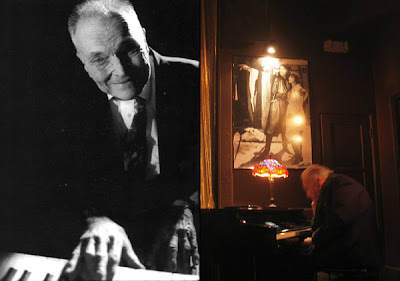 While the media in what the TV news like to call “the Southland” spends 100% of its time today waxing implausibly maudlin over the Michael Jackson memorial circus in downtown LA, the following email arrived from the Cinefamily organization who do a damned good job running the Silent Movie Theatre here in Hollywood. I didn’t know Bob Mitchell either, but, in this guy’s lifetime, we have gone from light-through-celluloid silent film with a human pianist, to digital downloads and now approach computer-generated total entertainment. This must serves – if nothing else – to confirm what Marshall McLuhan told us. The Speed-Up is now.

“I have sad news. Our organist, Bob Mitchell, has passed on at the age of 96. Mr. Mitchell, who started playing at the Pasadena Playhouse at the age of only 12 years old, had actually played for silent films in the '20s. It was a pleasure and a privilege to witness someone who wasn't just a master at his craft, but was a human portal to another time. There will be wonderful silent musicians continuing the tradition of live, improvised accompaniment, but there was a certain unforgettable authenticity that comes from not simply recreating another time, but being of it. Bob's entire musical background and earliest memories lent a texture to his performance that was quite unique; his musical quotations, his sense of humor, his reference points were all of the era. He knew and remembered the songs and themes that were contemporaneous with the films he accompanied, and would weave them into the scores at natural points. If you were watching William Hart's silent western Tumbleweeds -- sure enough, he would play the hit song "Tumbleweeds" as the credits rolled. It is short notice, but tomorrow, before our screening of Greta Garbo's Love, we will have a short memorial for Bob.”
Posted by Mick at 7/07/2009 11:21:00 PM 3 comments:

THIS IS A WATCHBIRD 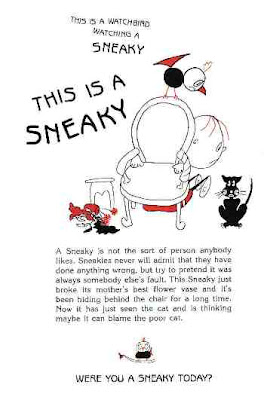 And one symptom of the Speed-Up is way in which all things become possible on the web. Just yesterday, I remarked how, “when I was a kid I used to see a comic strip – I’m damned if I can remember the title – that featured something called a Watchbird that came with the highly forbidding slogan ‘This is a Watchbird watching you!’” In less than twelve hours our pal William Kretschmer directs me to Munro Leaf's Watchbird cartoons. And here is one. Just like it was in the depth of the 20th century. Does anyone wonder that we who grew up with this kind of weird-ass moralizing accepted paranoia and conspiracy agendas as viable options? 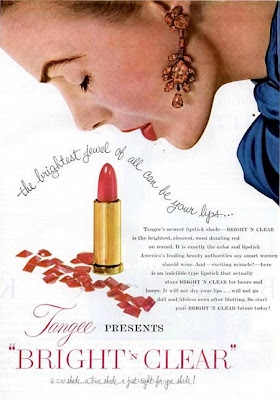 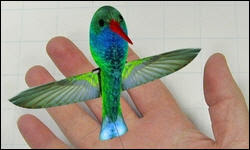 No. It’s a surveillance device.

When I was a kid I used to see a comic strip – I’m damned if I can remember the title – that featured something called a Watchbird that came with the highly forbidding slogan “This is a Watchbird watching you!” Now it seems we have the real thing. We may not be able to care for our sick, educate our children, or find jobs for the workforce, but there’s always a couple of million for a new spy toy. The story comes from our pal Faux Smoke.

“AeroVironment is designing and building a prototype flapping-wing unmanned aircraft under the second phase of the U.S. Defense Advanced Research Projects Agency’s Nano Air Vehicle (NAV) program. The $2.1 million Phase 2 contract was awarded after the company accomplished controlled hovering flight of an air vehicle using a pair of flapping wings for both propulsion and control. The milestone was achieved in December 2008 with the 20-second flight of the Mercury interim test vehicle, says the company. Under remote control, the battery-powered vehicle climbed and descended, flew sideways, and forward and backward.” (Click here for more and a video.)
The secret word is Tweet
Posted by Mick at 7/06/2009 11:28:00 PM 5 comments:

THE MONKEY WILL HAVE WHAT YOU’RE HAVING 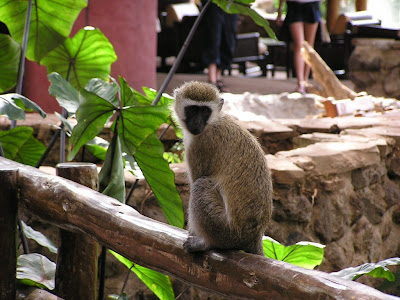 Last week wallabies were breaking into opium fields, getting high, and then staggering around to make crop circles. (See June 26th) Now Noudela draws our attention to how, in the Caribbean, vervet monkeys have developed a taste for alcohol and can regularly be spotted stealing cocktails from humans on the beach. Could it be that monkeys and marsupials have a better grasp on reality than we do? Click here for the video.
Posted by Mick at 7/06/2009 11:24:00 PM No comments: 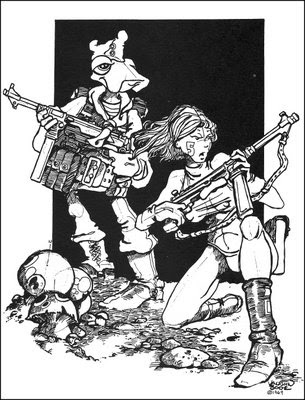 WHEN SUPERMAN FAILS (And negativity don't pull you through) 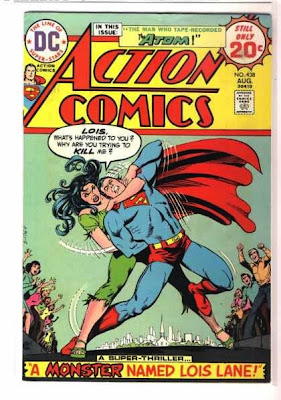 Charles Krauthammer is a right wing, neocon, blowhard who fancies himself as an intellectual, and to prove he’s a cut above Rush, he has a column in The Washington Post, maybe by some concept which gives equal space to the slavering lackeys of arcane corporations. (He’s also an unlovely motherfucker so we don’t need a picture.) What follows is Krauthammer’s vision of the “real” agenda of the Obama administration. And as I read it, I can only hug myself and sway, laughing with something near to hysteria. Oh if such was only true. If it was only true. If only the right could be close to right.

“Obama has far different ambitions. His goal is to rewrite the American social compact, to recast the relationship between government and citizen. He wants government to narrow the nation's income and anxiety gaps. Soak the rich for reasons of revenue and justice. Nationalize health care and federalize education to grant all citizens of all classes the freedom from anxiety about health care and college that the rich enjoy. And fund this vast new social safety net through the cash cow of a disguised carbon tax. Obama is a leveler. He has come to narrow the divide between rich and poor. For him the ultimate social value is fairness. Imposing it upon the American social order is his mission…The reordering of the American system will come not from these temporary interventions, into which Obama has reluctantly waded. It will come from Obama's real agenda: his holy trinity of health care, education and energy. Out of these will come a radical extension of the welfare state; social and economic leveling in the name of fairness; and a massive increase in the size, scope and reach of government. If Obama has his way, the change that is coming is a new America: "fair," leveled and social democratic.”

And talking of The Washington Post, click here to read this piece of scandal sent over by Munz. Seems like the paper that brought down Nixon is now just one more whore on the beltway selling access to the power.
“Washington Post publisher Katharine Weymouth said today she was canceling plans for an exclusive "salon" at her home where for as much as $250,000, the Post offered lobbyists and association executives off-the-record access to "those powerful few" – Obama administration officials, members of Congress, and even the paper’s own reporters and editors.”
Maybe the print media really does deserve to go broke.

And at the head of this Sunday night moan, I paraphrased Bob Dylan, (with an image from Valerie) and thus it only seems fair to post a link to a cool version of the mutilated song. Click here. 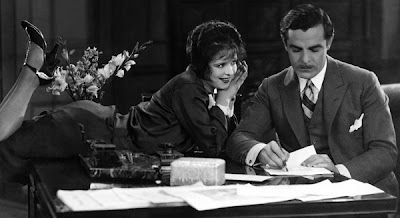