THE UNITED STATES OF AMERICA, A NUCLEAR POWER WITH ENOUGH FIREPOWER TO DESTROY THE WORLD MULTIPLE TIMES OVER HAS JUST HAD IT’S CREDIT RATING DOWNGRADED. MEANWHILE THE CATAPOCALYPSE DRAWS CLOSER… 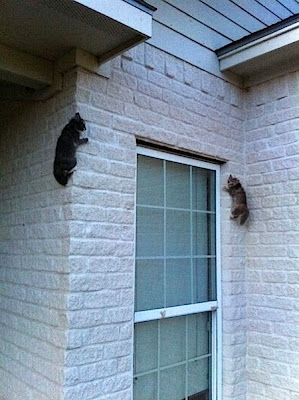 By way of explanation I’m tired, my head is starting to ache, and I feel disinclined to write any more tonight. Click here for Eddie Cochran

AND THE BIRDS MAY ALSO BE IN ON IT… 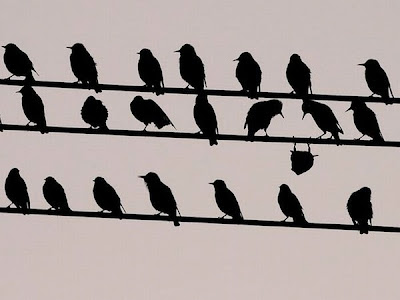 MORE CHICKEN THAN A MAN EVER SEEN Why you might ask, as the Dow sinks and the government of the United States and its corporate masters attempt to infect the global economy with terminal capitalist gangrene – and ultimately hand the infinite game to China – why Doc40 devotes its space and time to a recipe for Elvis Presley’s favorite fried chicken? The anniversary of Elvis’s death approaches, which is something we mark in passing here but certainly don’t celebrate. More important, though, as we seem to be dragged deeper and deeper into Great Depression II, I can’t help but reflect what Elvis was born during Great Depression I and almost certainly went hungry as a kid which might account for his compulsive eating in later life and why the recipe calls for no less that 30 chickens. (You note we have refrained from using an image of a fat Elvis. Doc40 don’t play that) 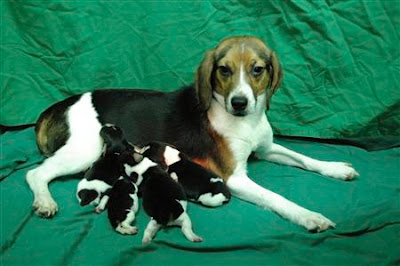 Our pal Aeswiren sent us this oddity. Alas we don’t have pictures of the luminous doggie. (I also assume they called the 2005 clone-beagle Snuppy because, if they called it Snoopy, lawyers from the Charles M. Schultz Empire would have fallen upon the cloners like piranha.)

"South Korean scientists said on Wednesday they have created a glowing dog using a cloning technique that could help find cures for human diseases such as Alzheimer's and Parkinson's, Yonhap news agency reported. A research team from Seoul National University (SNU) said the genetically modified female beagle, named Tegon and born in 2009, has been found to glow fluorescent green under ultraviolet light if given a doxycycline antibiotic, the report said. The researchers, who completed a two-year test, said the ability to glow can be turned on or off by adding a drug to the dog's food. The creation of Tegon opens new horizons since the gene injected to make the dog glow can be substituted with genes that trigger fatal human diseases," the news agency quoted lead researcher Lee Byeong-chun as saying. He said the dog was created using the somatic cell nuclear transfer technology that the university team used to make the world's first cloned dog, Snuppy, in 2005. The scientist said that because there are 268 illnesses that humans and dogs have in common, creating dogs that artificially show such symptoms could aid treatment methods for diseases that afflict humans. The latest discovery published in 'Genesis', an international journal, took four years of research with roughly 3.2 billion won ($3 million) spent to make the dog and conduct the necessary verification tests."
Posted by Mick at 8/04/2011 04:35:00 PM No comments: 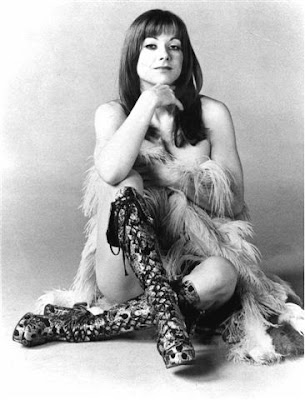 SHAVE AND A HAIRCUT TWO BITS 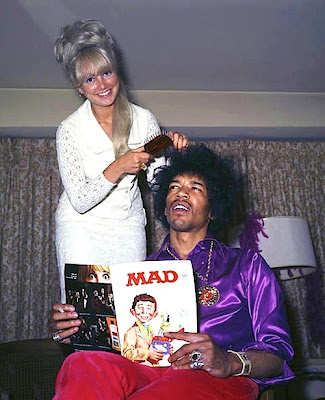 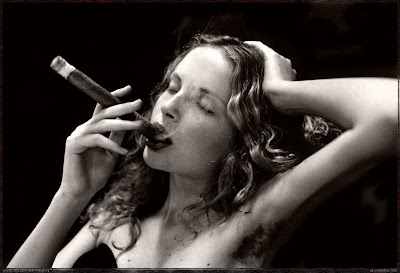 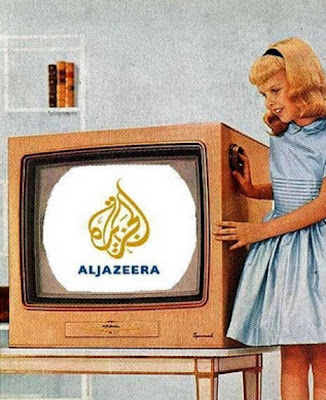 “The richest 1% of US Americans earn nearly a quarter of the country’s income and control an astonishing 40% of its wealth. Inequality in the US is more extreme than it’s been in almost a century — and the gap between the super rich and the poor and middle class people has widened drastically over the last 30 years.” 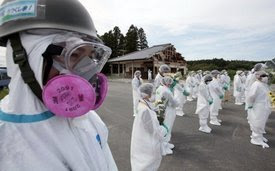 I don’t know if Al Jazeera is updating the situation in Fukushima but, sure as shit, no other part of the MSM is. They’re too busy with News Corp, Amy Winehouse, and the debt ceiling.

TOKYO — Tokyo Electric Power Co. (TEPCO) said Monday it had monitored record high radiation at the Fukushima Daiichi nuclear power plant crippled by the March 11 quake and tsunami. TEPCO said radiation levels reached at least 10 sieverts per hour near the debris left between the number one and number two reactors of the plant at the center of the ongoing nuclear crisis. The previous record was three to four sieverts per hour monitored inside the number one reactor on June 3. "Three plant workers were exposed to a dosage of four millisieverts while they were monitoring radiation," a TEPCO spokeswoman said. "We are still checking the cause of such high levels of radioactivity." The government and TEPCO say they remain on target to bring the reactors to a safe state of cold shutdown by January at the latest now that a water circulation system has been established. Efforts to stabilize the worst nuclear crisis since Chernobyl 25 years ago have continued since a 9.0 magnitude earthquake triggered a tsunami, sparking reactor meltdowns at the plant and spewing radiation into the environment. The government has said radiation levels around the plant, which lies 220 kilometers (136 miles) from Tokyo, had fallen to "two-millionths" of the peak recorded March 15. Tens of thousands of people remain evacuated from homes, businesses and farms in a no-go zone around the plant.
Posted by Mick at 8/03/2011 08:35:00 AM 1 comment: 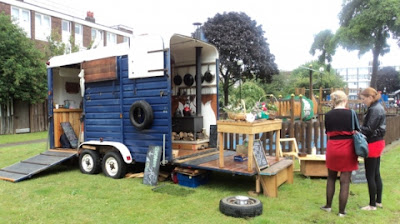 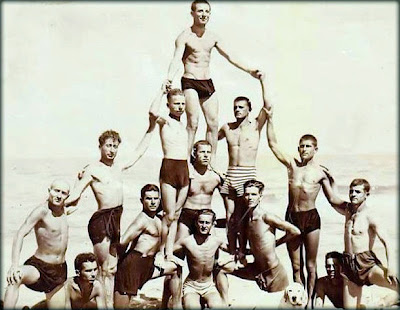 Benedict Frozdick (second from left) and his dog Ruddles (fourth from right) contributed absolutely nothing to the human pyramid.
Posted by Mick at 8/03/2011 08:25:00 AM No comments: 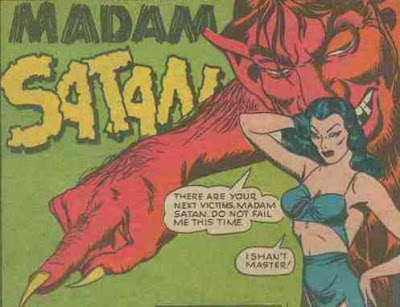 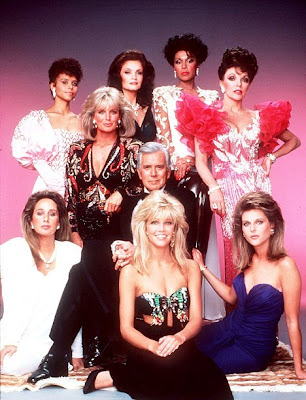 DOC40 IS TAKING THE DAY OFF TO GET SOME SLEEP, BUT WE DID LIFT THIS FROM WORLD OF WONDER TO POST WITHOUT COMMENT 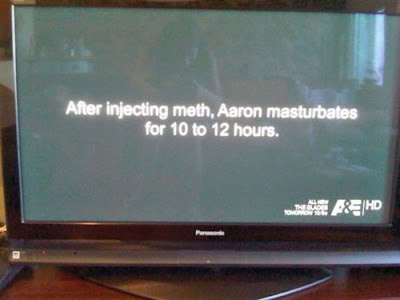 Click here for Betty Chung (Lifted from our pal Gwennie)

The secret word is Tomorrow

IT’S THE SAME THE WHOLE WORLD OVER

Bernie Sanders is the lone socialist in the US senate. His statement applies not only to the United States but too all of the developed world where the wellbeing of ordinary people is being cynically sacrificed to a greed so overwhelming it would be an abstraction if it wasn’t so damaging.

“The Republicans have been absolutely determined to make certain that the rich and large corporations not contribute one penny for deficit reduction, and that all of the sacrifice comes from the middle class and working families in terms of cuts in Social Security, Medicare, Medicaid, LIHEAP, community health centers, education, Head Start, nutrition, MILC, affordable housing and many other vitally important programs. I cannot support legislation like the Reid proposal which balances the budget on the backs of struggling Americans while not requiring one penny of sacrifice from the wealthiest people in our country. That is not only grotesquely immoral, it is bad economic policy.” 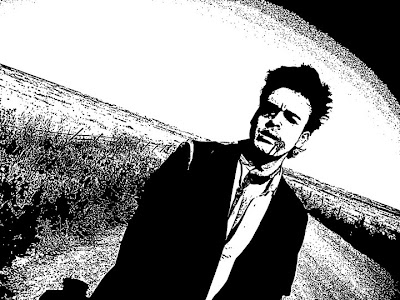 Regular readers of Doc40 may recall that we’ve been following the progress of the short film that director Kris Hipps has been building around the Tijuana Bible tune/spoken word piece “Memphis Psychosis”. A new cut is now up on YouTube and well worth a few minutes of your time. 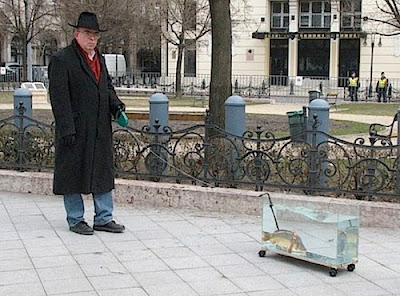 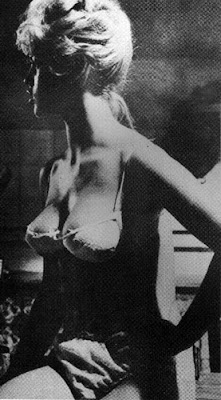 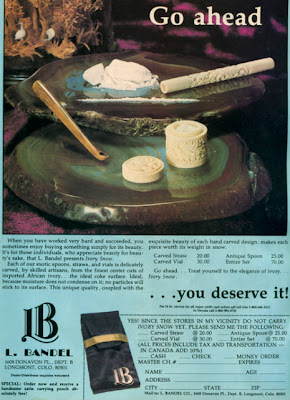 It’s been quite a while since I had cocaine for breakfast, and never with the kind of de luxe utensils pictured here – implements from those lost days when pissing away all of one’s substance on coke was the ultimate display of wholly irresponsible affluence and temporary success, and could lead to mindless and anonymous fucking, endless bouts of babbling dementia, and elaborately paranoid theorizing. I mean, shit, it was rough back in those terrible times when the razors scraped the glass in nightclub toilets and the western world and it’s culture could only survive on cocaine, Mandrax, and maybe the odd valium if a boy needed a nap. We were forced to tolerate movies like The Godfather, records like Exile On Main Street, comedians like Richard Pryor, and writers like Hunter Thompson. Thank the lord we have put all that behind us so we can comport ourselves with sober dignity and content ourselves with Coldplay and Smurfs the Movie. 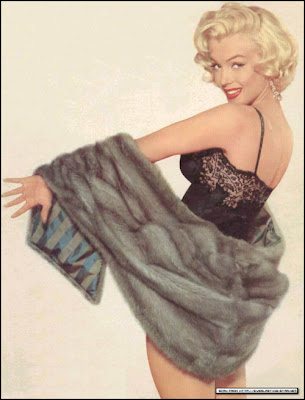 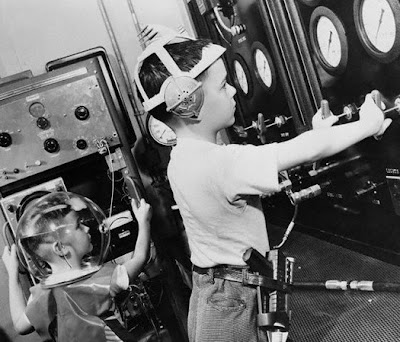 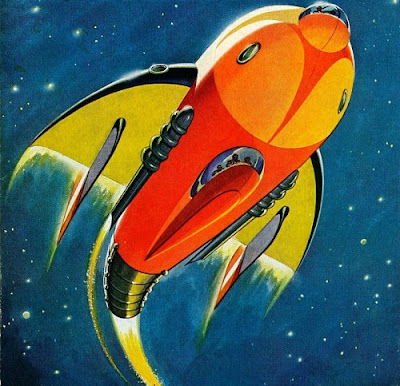