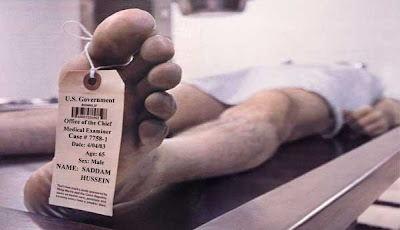 AFTER THE HANGING, A QUARTET OF QUESTIONS
1) While being aware that Saddam Hussein was a mass-murdering shithead, I must confess that a part of me found the cable TV deathwatch, the jubilation and all the other trappings both distasteful and embarrassing. We are supposed to be civilized and therefore operate on a higher level than mass murdering shitheads, no?
2) Of course, SH would have made it a lot easier had he shot himself like Hitler or even gone down in a hail of bullets like his sons, but no. He tried to survive and failed. But isn't there some old time honor system whereby his rank alone should have afforded him at least a firing squad complete, with cigarette and blindfold?
3) But now it seems that hanging has established as the current penalty are we to assume it applies to our own mass-murdering shitheads in the USA?
4)And one final query? How soon will the execution be up on YouTube?
The secret word is Hemp
CRYPTIQUE -- I'm helping clockwork Santas drown themselves.
Posted by Mick at 12/30/2006 01:39:00 AM No comments: 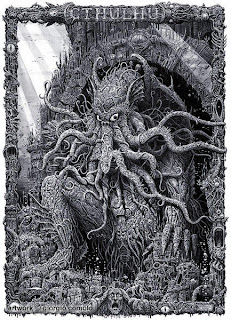 FROM THE POST-XMAS MAIL
Aeswiren reports on…

CTHULHU’S PARENTAGE
“According to correspondence between Lovecraft and fellow author Clark Ashton Smith, Cthulhu's parent is the androgynous deity Nagoob. Nagoob mated with the Outer God Yog-Sothoth to bear Cthulhu on the planet Vhoorl. Now, considering the descriptions of Yog-Sothoth I've seen, heavy on the quivering, the gelatinous etc., one does rather wonder why anything remotely androgynous would consider touching him with the proverbial barge pole, let alone actually mating."

And in the same (jugular) vein this little gem came from 00soul.

WHILE Elizabeth marvels…
“James Brown is in a gold coffin. The white hearse has glass sides!”

AND MrMR sends a link to a incredibly comprehensive compendium of recent Daily Kos piece on developments in the War On Drugs with (for me) a previous unseen piece on recreational psychoptropics by the late great Carl Sagan.

The secret word is Future

FINALLY, as always, in the time honored, Doc40, seasonal tradition, we have PENGUIN WHACKING

MEANWHILE I have a media column in the new LA CityBeat on the moral effects of Xmas advertising, and also Steve Appleford has a cover story on Hunter S. Thompson.
Posted by Mick at 12/29/2006 02:15:00 AM No comments:

POET FINDS LOST WORK
When Lizzie Siddal, the wife of Dante Gabriel Rossetti died of am overdose of laudanum, the distraught Rossetti had his unpublished poems buried with her in her grave in London’s Highgate Cemetery. Eight years later, when he felt creatively tapped out, he had the coffin exhumed, retrieved the verses and published them.
I must confess that I haven’t been writing too much poetry myself lately, (maybe for kindred reasons to DGR) but, maybe because of how they have this bullshit planet set up, there’s plenty else to write about so I wasn’t bothered. Then, over Xmas, aside from attempting all the bonhomie my system would stand, I was also moving files from an old computer to a new one, I happened across a file of a piece that must have been written around 1986-7, in the Tijuana Bible days, that I had totally for gotten about. It is titled…

My mind drifts back to night-complex self destruction, the synaptic crapshoot at suicide's edge that we knew as fun, the blatancy of things past, and, above all The Ladies Of The Vampire Club. Now what was the name of that place? The afterhours bunker, fashionable slum haunt out on Avenue C? Where you had to look as though you had just come from an appointment with your personal embalmer to circumvent the Sumo wrestler guardian of the velvet rope, and mingle with the girls who never saw the sun.

The Ladies Of The Vampire Club

And those lairs wherein they lurked, Ninth Street railroad walkups transformed to Spider Queen salons in which they courted and held court, and drank the blood of servants among their relics, the human skulls, the Chinese cymbals, the Arabian mandolins, and the severed index fingers of paramours who had lost their roll of the dice to the soft hiss and cold breath across pearl white fangs of

The Ladies Of The Vampire Club

And those moments of rage that not even ice blue valium could mitigate when, as all too often they believed they had not been used appropriately or accorded the measure of emotional control they viewed as their right. Those moments of rage like the howl of driving rain and the deafening crash of night-thunder around the granite turrets of the castle, scattering the walking wounded of Valhalla with their epic Wagnerian Nazi-scream "Where is the gasoline for my tanks?"And finally the satisfaction, the curled kitten retraction of fangs and claws when rage was spent and guilt instilled, and the otherwise required effects had been achieved. They took no prisoners The Ladies Of The Vampire Club, for they were possessed of a supernatural instinct, for gauging the exact moment when pleasure prolonged could transcend to torture in the beating of their soft leather wings.

It is possible that I have spent too much of my life in the company of The Ladies Of The Vampire Club, but, like Otis Redding once remarked, it's too late to stop now.