ALL HALLOWS’ EVE AND ZOMBIE STRIPPERS 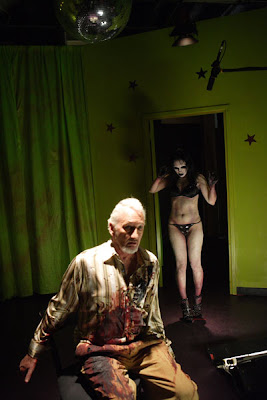 I have always been somewhat ambivalent regarding Halloween and all the nonsense about demons and pumpkins, hell houses, and it being the celebration of Satan. The event seems – to one who looks like that all the year round – to be a very serious case of amateur night on any level you care to chose. It ain’t the Day of the Dead by any manner of means, and no Beltran fires burn. All too often it appears little more than an excuse for the squares to pretend they aren’t. Being raised in England also didn’t help. When I was a kid, October 30th meant being in full anticipatory mode for Guy Fawkes and November 5th -- Bonfire Night – when we got to run riot with legal fireworks and pyromania became an artform. The day found me planning later mayhem, not trolling the streets in a plastic costume begging for Milky Ways.
I used to enjoy Halloween more when I lived in Lower Manhattan, if for no other reason that the costumes on Christopher Street were outrageous in the extreme, and you could see nothing like them this side of Venus. The Boys’ Town parade here in LA just can’t compare, and it also turns the my neighborhood into one vast, cop-controlled parking lot which is damned irritating. My other problem – aside from ever cable channel being jammed with Saw movies that I really dislike – is that Halloween is a so firmly attached to Christianity and candy that it simply cannot qualify as the kind good hearty pagan death-rock Saturnalia for which I would have every sympathy.

OR WOULD YOU PREFER A HALLOWEEN COMIC? 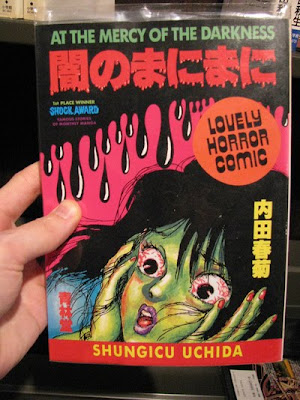 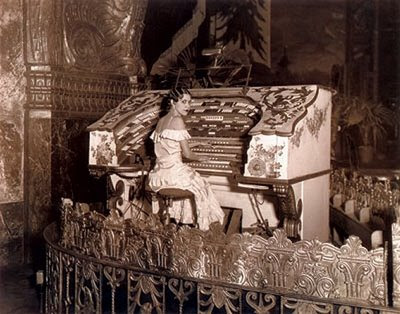 ESCAPADES OUT ON THE D TRAIN 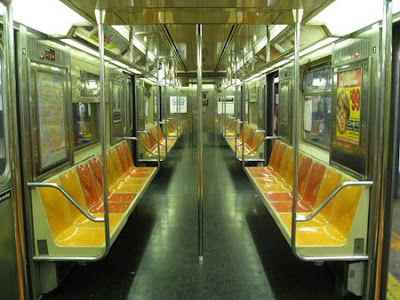 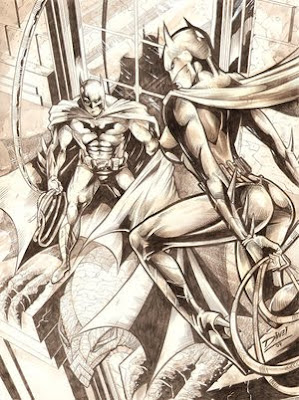 Oh my. When the awesome Valerie sent the following (and also the image) what could I do (once again) but post the entire package? Especially on a busy and chaotic Friday in the world. 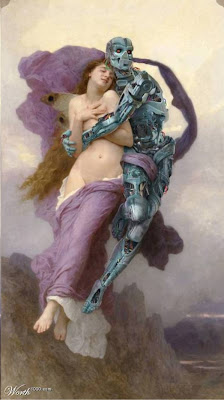 I guess one might reason that this is Pre-Raphaelite science fiction following in wake of steampunk. (But should I devise a fantasy series about Dante Gabriel XX901?) The pic was sent by the grand HCB.
Posted by Mick at 10/30/2009 03:58:00 PM 1 comment: 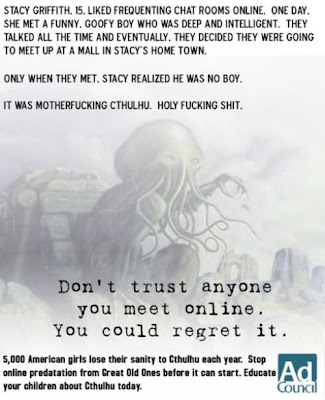 JUST WHEN YOU STOP WORRYING… 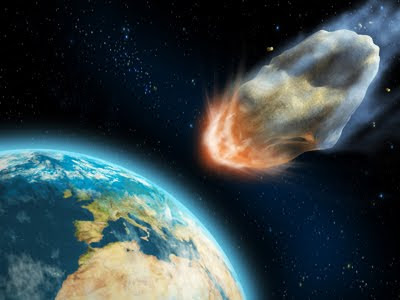 Just when you stop worrying that an asteroid will hit the Earth, one does exactly that.

"The New Scientist website reports the dramatic explosion over South Sulawesi, Indonesia, on October 8 underscores how blind humanity is to the danger of giant space rocks. NASA estimated the explosion was the equivalent to 50,000 tons of TNT, making it one of the largest asteroid explosions ever observed. However, this time we were lucky - the blast caused no damage on the ground because it occurred at high altitude, 15 to 20km above Earth's surface. While the explosion was heard by witnesses in Indonesia and picked up by international nuclear explosion detectors, the asteroid only became visible after it exploded. Video images of the sky following the event showed a dust trail characteristic of an exploding asteroid, according to the New Scientist. Researchers believe the asteroid was about 10 metres wide - too small for even our most powerful telescopes to spot. But Tim Spahr, director of the Minor Planet Center, in the US state of Massachusetts, warns even an asteroid of this size could cause a lot of damage on the ground."
Posted by Mick at 10/29/2009 05:18:00 PM 1 comment: 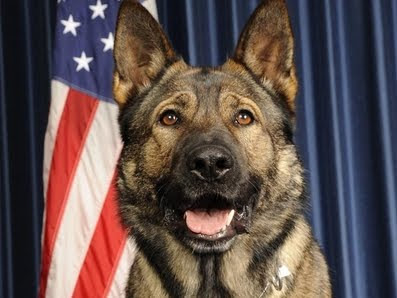 Dog snorts speed? How could I not post this?

"A German shepherd K-9 in Ventura County should be eligible for a bump in hazard pay (read: more treats) after having a seizure that may be drug-related. Officials say K-9 Balu may have inhaled some loose methamphetamine Monday during a narcotics search in Moorpark, the Ventura County Star reported: The deputies believed they saw the suspect toss two bags of drugs, and they recovered one torn bag of methamphetamine, (Balu's partner Senior Deputy Dean Worthy) said. While he was searching for more drugs, Balu went to the area where the first bag was tossed and alerted Worthy, said the senior deputy. Balu got close enough to the spilled drugs that Worthy worried his K-9 partner might have sniffed some of it up, but there were no remnants of drugs on the dog's face, and he was acting fine." (Click here for more.) 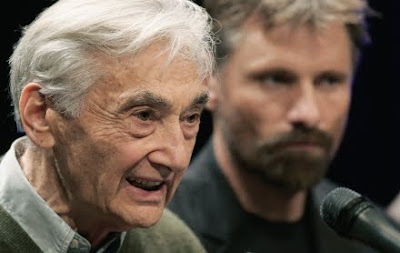 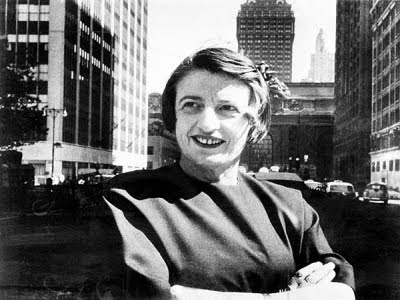 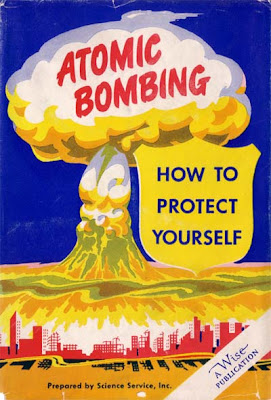 LONG AGO AND FAR AWAY, A GALAXY TURNED UGLY 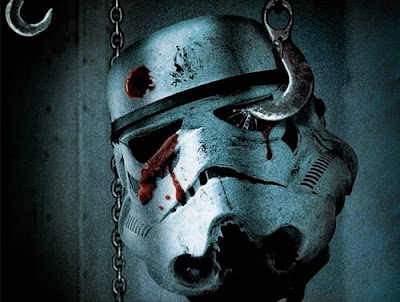 Our pal hipspinster sent me a link to some new Dr Who fan anime, but along the way I was sidetracked by a squib for a new Joe Schreiber novel called Death Troopers that seems to be set in a reality where Star Wars meets the Saw series. It had to start me wondering if this was a true sign of the times, or just the 21st century vision of corporate publishing. I think I’m glad I’m too old and cranky to need any longer to consider doing such things.

“The storyline for Death Troopers is pretty simple, really — an Imperial prison barge, during the years right before the original Star Wars movie, runs into some engine trouble. Good thing they find a Star Destroyer in the middle of nowhere, which they can cannibalize for parts. Unfortunately, the Star Destroyer has some kind of weird virus on board, which kills everyone it comes into contact with... and the people who die don't stay dead. And that's about it. The survivors from the prison barge have to run a gauntlet of Imperial zombies and try to escape in one piece, while facing their own personal traumas and uncovering a sinister biological weapons program that comes straight from Lord Vader himself.
Among others, we meet a sadistic prison guard, Sartoris, an idealistic prison doctor, Cody, and the Longo brothers, the two sons of Trig Longo, a smuggler whom Sartoris murdered. Everybody gets a nice story arc in between (and during) zombie attacks.
It's a quick read, and there's a lot of chasing around dark corridors and crawlspaces and the holds of abandoned spaceships." Click here for the whole story and a neat promo video. 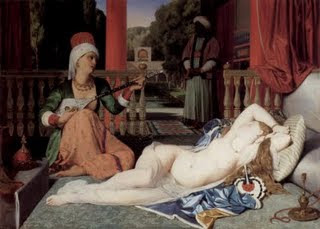 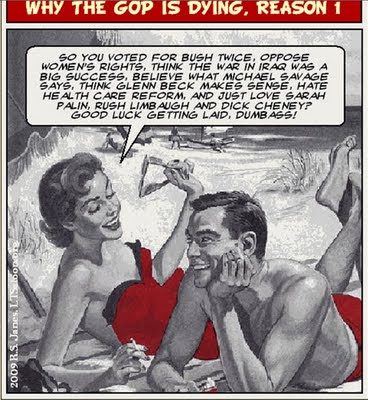 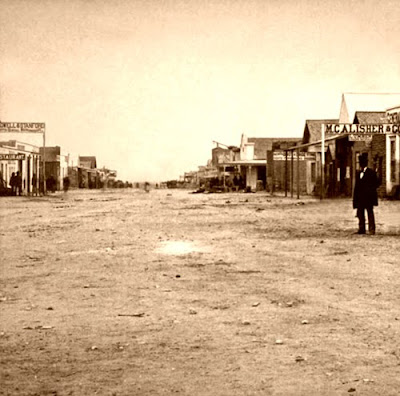 No, it hasn’t been an okay day. It’s been a rotten day. Nothing apocalyptic, just the routine grind-down and the LA heat came back. I would probably be hiding under the bed, surly and with nothing to say except that I felt I had to remind all you good people that today is the 128th anniversary of The Gunfight at the O.K. Corral, when the Earp brothers and Doc Holliday (my favorite gunfighter) faced down Ike Clanton and his crew. As Wikipedia tells it…

“The Gunfight at the O.K. Corral was a gunfight that occurred at about 3 P.M. on Wednesday, October 26, 1881, in Tombstone, Arizona. The famous gunfight did not actually occur at the O.K. Corral. It occurred in a fifteen- to twenty-foot space between Fly's Lodging House and photographic studio, and the MacDonald assay house west of it. The end of the gunfight took place in Fremont Street. Some of the fighting was in Fremont Street in front of the vacant lot. About thirty shots were fired in thirty seconds. Although only three men were killed during the gunfight, it is generally regarded as the most famous gunfight in the history of the Old West, even though many other gunfights of the period resulted in more people killed. The gunfight at the O.K. Corral has been portrayed in numerous Western films. It has come to symbolize the struggle between law-and-order and open-banditry.” 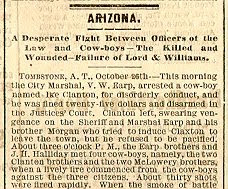 ONLY ONE CURE FOR THE TOMBSTONE BLUES? 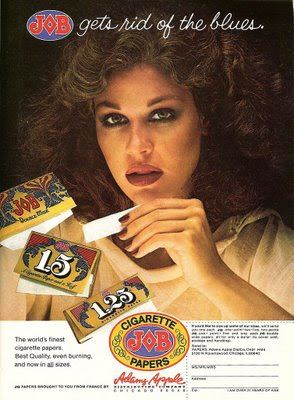 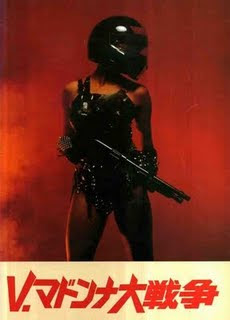 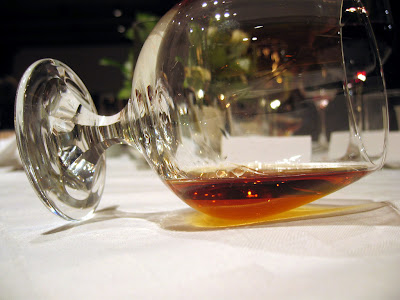 The doctor poured cognac into the prisoner’s balloon glass. The gesture was superficially expansive, but did nothing to disguise the cold underlying hostility. “So much of what you say is hardly plausible.”
The prisoner swirled the brandy in the ostentatious glass. He inhaled the alcohol vapor. He hadn’t eaten in so long, the fumes alone were capable of making him drunk. “If you had seen what I had seen, you would not be so reluctant to believe me.”
“If I had seen what you had seen I would not be required to believe you. I would be you.”
“But if you were me, who would I be?”
“Word games? Juvenile existentialism? Isn’t this all a little pointless?”
“I didn’t ask to be here.”
The doctor leaned back in his chair. “That is something I do believe.”
“That’s something you know for a fact. Belief or disbelief don’t even signify. I didn’t ask to be here, I actively resisted coming here, and I’m being held against my will. You actively facilitated my captivity. It is something that cannot be called into question.”
The doctor carefully pressed his fingertips together. “Whatever you think is being done to you is ultimately for your own good.”
“Bullshit.”
The doctor smiled. “Now who’s unwilling to believe?”
The prisoner sighed. “I’m willing to believe. Tell me anything. I’ll believe it. Just watch me.”
Posted by Mick at 10/25/2009 06:14:00 PM 3 comments: 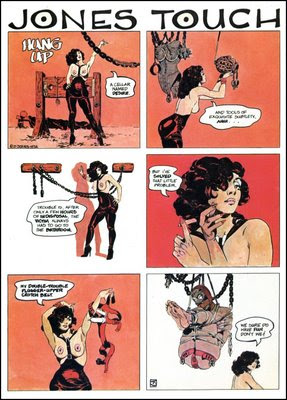 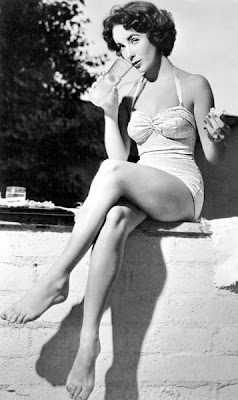