SHEEP SHAGGING IS ONE THING, BUT.... 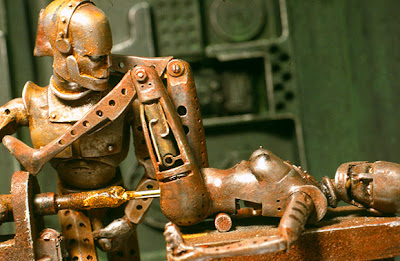 This story, sent by UK Steve and written by Richard Alleyne. is from The Daily Telegraph Online and hardly requires comment…
A man has been placed on the sex offenders’ register after being caught trying to have sex with a bicycle. Robert Stewart was discovered in his room by two cleaners at the Aberley House Hostel in Ayr, south west Scotland, in October last year.
On Wednesday Mr Stewart admitted to sexual breach of the peace in Ayr Sheriff Court, where depute fiscal Gail Davidson described how he had been found by the hostel workers. She said: "They knocked on the door several times and there was no reply.
"They used a master key to unlock the door and they then observed the accused wearing only a white T-shirt, naked from the waist down.
"The accused was holding the bike and moving his hips back and forth as if to simulate sex." Both witnesses, who were extremely shocked, notified the hotel manager, who in turn alerted the police. Mr Stewart was placed on the sex offenders’ register but his sentence was deferred until next month.He is not the first man to be convicted of a sexual offence involving an inanimate object, however. Karl Watkins, an electrician, was jailed for having sex with pavements in Redditch, Worcs, in 1993.

The secret word is Handlebar

The robot sex illustration was contributed by Valerie who seems amused by such things.

AND THIS short film sent by HCB is pure numerical genius. 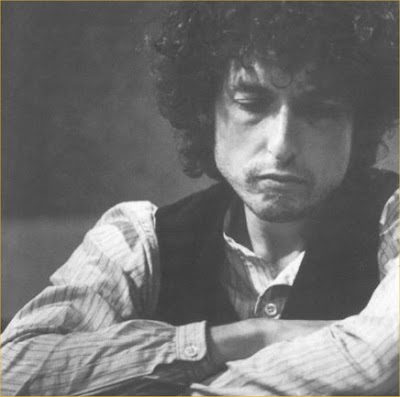 I can appreciate that a whole corporate big deal is going with Bob Dylan and introducing him to the 21st century. Yeah, DVDs, CDs, new compilations, and who knows what, plus the Bob Dylan machine that enabled you to write your own messages on the Subterranean Homesick Blues, pre-video video. And the weird use of All Along The Watchtower on Battlestar Galactica. Old Bob’s always been there, alternately – and probably fiendishly – inspiring and disappointed. I mean, the Victoria’s Secret video was a bit of a shock, but did he really have to do a fucking commercial for a gas guzzling behemoth like the Cadillac Escalade – Tony Soprano's vehicle of choice, that gets 14 mpg in the city and 19 mpg on the highway, and was named the worst SUV in terms of fuel economy? It makes it hard to retain the memory of this guy.

On the other hand, this is the finest cat animation I’ve seen in many a month. (If you understand feline wiles.) You need the sound.

The secret word is Miaow 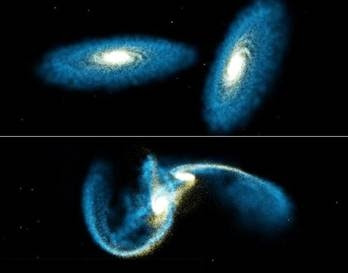 96F in LA today and its near fucking impossible to breath. The sense disaster is palapable. All the charred ruins. I feel ill. The despicable Bush arrives later for a sound bite. If I said what I really thought I’d probably have the FBI on the doorstep. (Although suicide by federal agent might be a merciful release.) Too hot to write, too hot to think straight, I wasn’t going to post. But this picture of two galaxies consuming each other seemed a cool contrast to the constant fire on TV. But are they devouring each other or maybe making love? And is there a difference?

The secret word is Gasping

The fires overshadow everything. They fill the hills. They surround the city, decimating the suburbs. Jokes, secret words, and YouTube clips, for the moment, seem superfluous. The sunset was an evil yellow/grey. I find it hard to breath. Just short of a million people have been evacuated and, so far, an area the size of New York City has burned. The temperature topped 90F this afternoon, while the Santa Ana winds randomly gusted and then died down. My home is so damned urban the cat and I are in no real danger, but friends just a few blocks up to the north must be sweating that nothing sparks off in the Hollywood Hills or Griffith Park. The mind can’t help but boggle at the unreality of it all. Firestorm is a terrible word when it becomes possible. Bush will show up here on Thursday like we needed his fucking photo op, and CNN talking head and nationally syndicated radio and wholly psychotic host Glenn Beck brings total insanity to the conflagration by stating, “I think there is a handful of people who hate America. Unfortunately for them, a lot of them are losing their homes in a forest fire today.” Who gives these bastards airtime? I don’t hate America but there are parts of this country that don’t make it easy to love.
I said music clips were superfluous, but maybe I was too hasty, maybe The Doors are needed. I notice I have already unconsciously quoted Jim. “The hills are filled with fire.”
Posted by Mick at 10/23/2007 08:49:00 PM 2 comments: 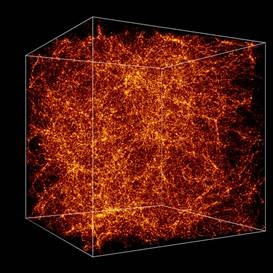 But the Black Matter empowers me
To talk of the events that dare not speak their name.
Sinister? I would say so.
But do my enemies experience the same anguish?
I would hope so
Yet I fundamentally doubt it
Such pain has been edited,
Excised and censored
From their pastel dictionary of Newspeak
And that, of course, is why they are my enemies
Turning in their narcissism
And suit-of-lights illusions of power
They deny the very existence of the Black Matter
But they will face it
They will face it head-on and hard
When the power to the controlling cube finally fails
And the Black Matter is loosed to its terrible freedom

The above represents something of a breakthrough. For over a year, for reasons that are known to some but otherwise I don’t care to discuss, I have been unable to write poetry. Fortunately I had such an untouched backlog of work that it wasn’t a crisis, and there was always new material for shindig, reading, or insurrection. But now, like some vintage panhead Harley, the machine turns over and I will ride it again wondering where it will take me this time – to Nirvana, maybe Hell, or just to the nearest tavern. 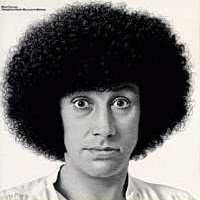 Yes, he even steals lines from Norman Mailer. But commercial motivation needs to be underway, because, even though I try hard to forget it, if I am to survice, I really do have to move books and CDs. (And keep asking myself if I need to get into the Café Press coffee mug business. Comments?) This glowing retrospective of my second solo CD – Vampires Stole My Lunch Money – showed up on the Spending Loud Night website, and made my ego very happy…
"Leader of England's answer to the MC5-- the late, great Deviants, NME contributor, sci-fi novelist-- Mick Farren has had his fingers in a lotta pies over his nearly 40-year career. Sadly, like most of the artists I profile here, his contributions to my beloved rock 'n' roll (did I mention he writes lyrics for Brother Wayne Kramer?) have gone virtually unnoticed for that same nearly four decades. No wonder Mick had been driven to drink by the time of this 1978 recording." (For more)

I believe copies of VSMLM can be obtained from the Bomp Online Store. Just search Mick Farren & The Deviants and there’s a wealth of stuff.

Valerie sent us this copy of the classic cartoon from the 1960s. Ron Cobb was, beyond doubt, the greatest single panel underground cartoonist. His immaculate draftsmanship was the envy of all, and, from his home base at the old LA Free Press, his work was syndicated across the global counterculture. He also designed all the human hardware in Alien which provided the crucial and stunning contrast to the alien constructs of H. R. Geiger

Of course, the above is from way back then. And this now. We used to be so paranoid back in the day, you'd hardly believe it. Thank heavens it's all different now.

The secret word is Progress 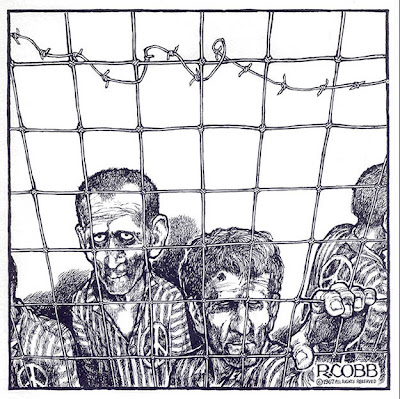 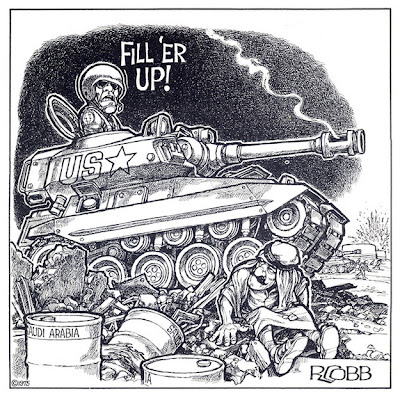 Plus The Rolling Stones doing "Jumping Jack Flash" live when they still meant something and Brian was still in the band.
Posted by Mick at 10/21/2007 12:45:00 AM 5 comments:
Newer Posts Older Posts Home
Subscribe to: Posts (Atom)