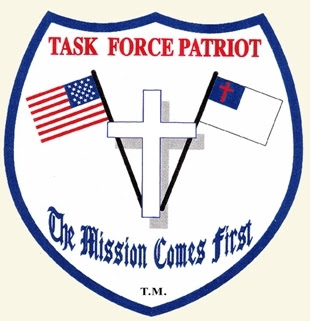 I’ve been aware of various news reports concerning Fundamentalist Christians making increasing efforts to turn the US Military into a “Christian” fighting force, but other things, some epic, some trivia, have been absorbing my attention, but when activists and Air Force veterans like Michael Weinstein make statements like the one below I kinda think it’s time to take notice. I mean, I don’t feel exactly comfortable with the idea that megaton loaded nuclear bombers are flying around with crews who believe the Book of Revelation is going become reality anytime.

“The Christian Taliban is running the Department of Defense, It inundates everything. Can you imagine a contingent of religious zealots, with their contempt for secular values (and such manifestations of secular order as the U.S. Constitution) — and with their zest for holy war — in control of the most potent fighting force and weaponry in human history? Is this possible? Well, said Weinstein, consider the 523rd Fighter Squadron, based at Cannon Air Force Base, N.M., which calls itself The Crusaders, and whose emblem consists of a sword, four crosses and a medieval knight’s helmet. They fly F-16s with payloads consisting of “a wide variety of conventional, precision guided and nuclear weapons.” And listen once again to Commander-in-Chief Bush, speaking in 2003 to Palestinian Prime Minister Mahmoud Abbas, according to the Israeli newspaper Haaretz: “God told me to strike at al-Qaida and I struck them, and then he instructed me to strike at Saddam, which I did, and now I am determined to solve the problem in the Middle East. If this is a religious war — a “clash of civilizations,” waged by competing agents of God’s will — victory may be indistinguishable from Armageddon. God help the human race.”
The secret word is Duck
Posted by Mick at 5/26/2007 12:43:00 AM No comments: 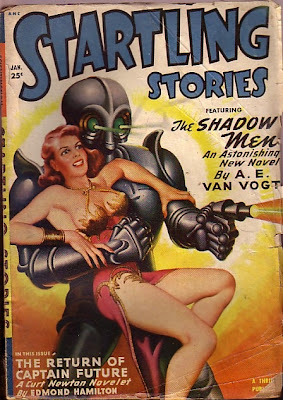 But back at the robot/human discussion of a couple of weeks ago, I’m wondering about the relationship between this lady in the futuristic skimpy dress and her robot. Is she being kidnapped? Rescued? Or is the robot using her as a human shield, and if so why? It hardly seems very logical. The robot is metal and while the lady is composed soft, wet, less that raygun-proof human flesh and bone.
Posted by Mick at 5/26/2007 12:37:00 AM 1 comment: 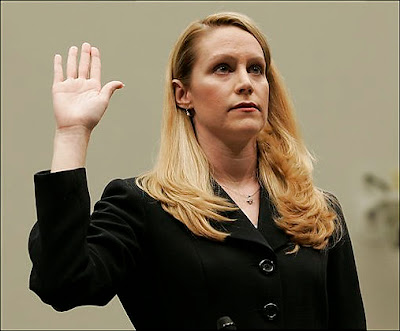 This is a Bushie. They are still dangerous. Give ‘em an inch and they take the Constitution. This broad could even have ended up being the commandant of the camp in which you found yourself incarcerated.

Gadfly-nuisance-but-frequently-right, investigative reporter Greg Palast claims to have the 500 emails that the House subpoenaed and Karl Rove claims were deleted forever. They prove definitively, says Palast, that the Justice Department is infested with operatives taking orders from Rove to steal upcoming elections for Republicans and permanently alter the Department. Here’s the story via Munz.

The secret word is Infiltration

Newton is not at all sure whether the random kitten generator isn’t just too cute. (Thanks Suzy) But I’m attempting to cheer myself up. Here also is my less that favorable preview of this weekend’s TV version of Bury My Heart At Wounded Knee from LA CityBeat
Posted by Mick at 5/25/2007 02:16:00 AM 2 comments: 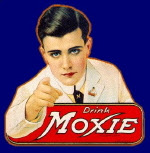 Can you imagine walking into a bar and ordering a Jack Daniels and Moxie?

THURSDAY IS FOR IRRATIONAL DEPRESSION 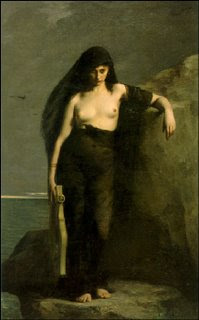 Which I am attempting to combat (or maybe indulge) – as I do battle with deadlines, the prose form, and the blues in the night (not to mention my fury at the fucking Democrats caving to Bush on Iraq) – with “Sappho” by Mengin, and “Tombstone Blues” by Bob Dylan, plus what are probably the most totally unsuitable combination of drugs and stimulants. This may be a moment of self-revelation on part of the artist, and, believe me, they don’t happen too often round here so make the most of it.

The secret words are Bloody Misery 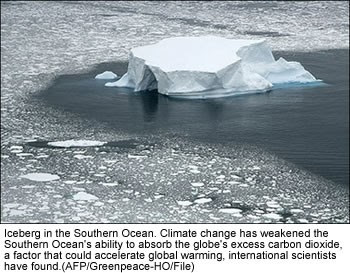 And fidicen didn’t exactly cheer up the day by sending over this story from Common Dreams that indicates the shit is worse than we think it is and deteriorating faster. Or as he puts it…
"The dreaded feedback loop has begun. When this starts to happen, it's awfully hard to "pull out". The mechanism takes a life of its own. We can't exactly turn down the volume or unplug the mother. Mind-numbing how fast this has all been happening--a signature of the feedback condition itself. All hands on deck. The whirlwind is in the thorn tree." 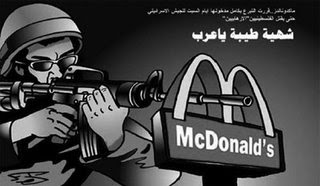 And finally, although I can’t read the language, the message is clear.

(reprise)
"The Commander-in-Chief answers him while chasing a fly
Saying, "Death to all those who would whimper and cry"
And dropping a bar bell he points to the sky
Saving, "The sun's not yellow it's chicken" 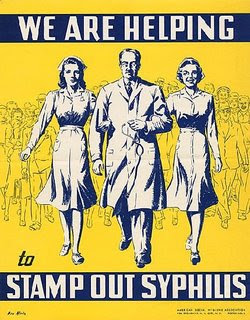 Which I have declared because I have a fuck of a lot of writing to do today, and very little to comment upon except that I was amused to see Paris Hilton doing a TV photo-op holding an actual Bible, at which point I simply had to ask the screen if one didn’t usually wait until one was actually banged up in the joint before getting religion. The screen, as always simply responded with a GM commercial and was no help at all, but then the thought of Paris and religion seemed neatly to bring us full circle to the artifact above. So…

The secret word is Antibiotic

TUESDAY'S SHAKE HANDS WITH THE DEVIL 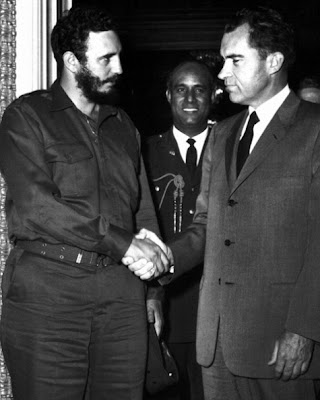 I have the famous picture of Elvis and Nixon on the wall of my study, but maybe I should have this one too. Once again stolen from Tsutpen.

And speaking of the devil, remember last June 6th, when everyone had a jolly drunken satanic time because the numerical date was 6.6.06. Well, now it seems like the out-there Christians (as opposed to the nice Christians, Betsy) are stealing the idea and making July 7th (7.7.07 geddit?) some major prayer event. That it turns out to be the Rapture is probably too much to hope for. I also recall, from 1977, the Rastafarians have some highly negative issues about mixing up sevens. (Heavy manners.) Thus I would, with all due courtesy, suggest to all you snake handling, tongue talkers to proceed with a measure of caution. Meanwhile I’m sticking with 12.21.12 – but more of that later when I explain how I can wax incredibly enthusiastic about something in which I don’t believe. Hell, that’s easy. I spent half a decade writing nosferatu novels.
Posted by Mick at 5/22/2007 12:24:00 AM 9 comments:

Newton, who has only met two dogs in his life, and therefore harbors no prejudices in that respect, warns that the sugar substitute Xylitol (sounds like the name of a Mayan death god) is deadly to dogs.
Newton would also like to remind you that The Animal Rescue Site still needs daily clicks to meet their quota of the free food donated to abused and neglected animals, by their corporate sponsors/advertisers. These donations are calculated by the number of hits on the site. Use this link to go to the site, and then click on the purple box "fund food for animals". Okay?
Posted by Mick at 5/22/2007 12:12:00 AM No comments:

We visited Strinberg On Helium a long time ago, but now it’s bigger, better, and decidedly more odd. Indeed, odd enough to merit a permanent link on the right. (Thanks Wend.) And, when you've finished doing that there’s this footage of the worlds smallest catapult hurling minuature confectionary at insects. (Thanks Noudela) 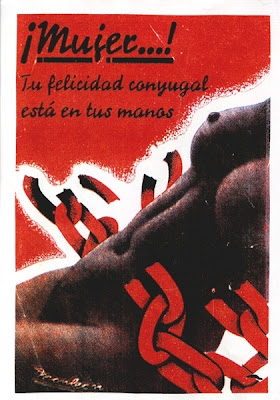 Valerie writes -- "In the 30s in Spain the majority of the working class, especially women, were illiterate so the graphics on posters were important and hence all theamazing civil war stuff. The guy who did this one, Manuel Monleon, is a favorite artist.
It says "Woman, your conjugal bliss is in you hands."

While Wendy has sent the following unfortunate language anomalies…
Coors
Beer maker Coors discovered that its slogan "Turn it Loose" translated into Spanish as "Suffer from Diarrhea". The company immediately pulled the advertisements and changed the campaign's slogan to "Won't Slow You Down" which it said "better resonated with Spanish-speaking audiences".
Reebok
In 1996, Reebok named a new women's tennis shoe Incubus. Unfortunately, Incubus, according to medieval mythology, was a demon who ravished women in their sleep.
Coca-Cola
The corporation's slogan "Coke Adds Life" was reportedly translated into Thai as "Coke Brings Your Ancestors Back from the Dead".
David Beckham
The footballer thought he had made a public statement of love and affection for his wife until it emerged that a tattoo on his arm bearing Victoria's name in Hindi had been misspelt. "Whoever wrote this tattoo is clearly not a Hindi expert," said Padmesh Gupta, president of the United Kingdom Hindi Committee.
Ford Pinto
When Ford launched its Pinto car in Brazil, it was forced to rebrand the range after someone pointed out that "pinto" was slang for "tiny male genitals".