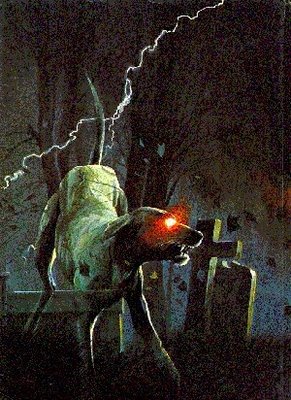 CRYPTIQUE – Put a chain around my neck and lead me anywhere. 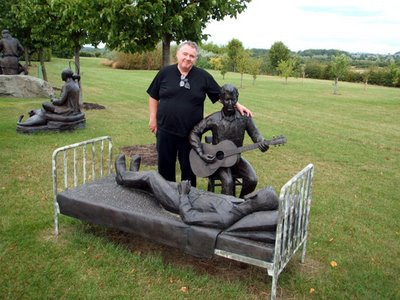 YOU’RE JUST NOT GOING TO BELIEVE THIS!
As many regular Doc40 visitors know our great and good friend Boss Goodman – former Deviants roadie, former Pink Fairies tour manager, former club DJ, concert promoter, and master chef at the Portobello Gold suffered a left-brain stroke back at the end of March. Since that time, he has received all kinds visits and notes of love and encouragement, but the one linked below really takes the cake. I can’t say more without giving away the surprise, but believe me, it’s scarcely believable.
(The pic was taken by Rich Deakin. It shows Boss at the country estate of Felix Dennis during his recovery from a heart episode that may have been a overture to the stroke. The sculpture, one of a series in Felix’s Garden of Fame is of a young Bob Dylan at the bedside of Woody Guthrie.)

The secret word is Wow!

(And the headline below is purely coincidental and in no way a joke about Boss's famous girth.) 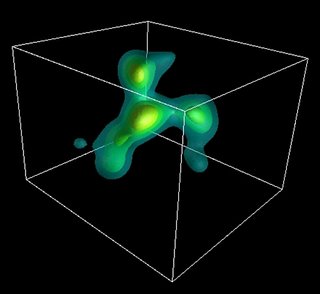 THE BIGGEST GODDAMNED DAMNED BLOB IN THE UNIVERSE
HCB sent over the following news report. There is no suggestion so far that it’s coming to get us, but you never know. (The blimp! The blimp! Fast and bulbous!)

An enormous amoeba-like structure 200 million light-years wide and made up of galaxies and large bubbles of gas is the largest known object in the universe, scientists say. The galaxies and gas bubbles, called Lyman alpha blobs, are aligned along three curvy filaments that formed about 2 billion years after the universe exploded into existence after the theoretical Big Bang. The filaments were recently seen using the Subaru and Keck telescopes on Mauna Kea. The galaxies within the newly found structure are packed together four times closer than the universe's average. Some of the gas bubbles are up to 400,000 light years across, nearly twice the diameter of our neighboring Andromeda Galaxy. Scientists think they formed when massive stars born early in the history of the universe exploded as supernovas and blew out their surrounding gases. Another theory is that the bubbles are giant gas cocoons that will one day give birth to new galaxies. The finding will give researchers new insight into what the structure of cosmos looks like at the largest scale. "Something this large and this dense would have been rare in the early universe," said study team member Ryosuke Yamauchi from Tohoku University. "The structure we discovered and others like are probably the precursors of the largest structures we see today which contain multiple clusters of galaxies," Yamauchi said.

The secret word is Jello. 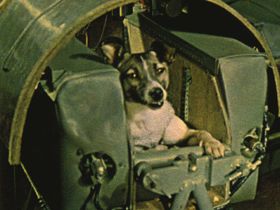 RETRO DOGGONE
I discovered the reflection linked below in the course of my web wanderings and found it touching and poignant. Or maybe I just have a soft spot for cosmonaut canines.
http://headwideopen.blogspot.com/2006/07/rip-laika.html

The secret word is Whimper