IT'S A GRAND OLD CANYON BUT... 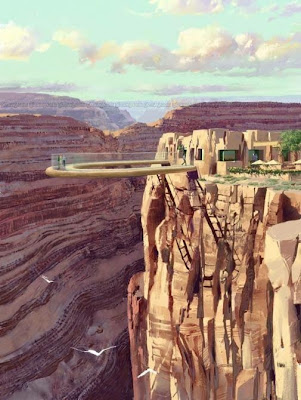 …yet another reason the rest of the world is getting very nervous of the USA.
From the New Scientist
"The Grand Canyon was formed a few thousand years ago by Noah's flood, and not a few million years ago by geological forces, right? So says a glossy book still on sale in Grand Canyon National Park, despite scientists' protests.
The National Park Service has been promising to reconsider whether to sell the book since 2003 (New Scientist, 9 July 2005, p 8), but an investigation by the Washington DC-based pressure group Public Employees for Environmental Responsibility discovered that the review hasn't happened. PEER also charges the NPS with blocking the publication of a pamphlet which describes creationism as non-scientific and advises park rangers how to distinguish science from religion in explaining geology to the public.
NPS spokesman David Barna compares the park's bookshops to a public library, with books on "many alternative beliefs", adding "it is not our role to tell people what to believe".
However, PEER director Jeff Ruch says that by selling the book, the government-funded park is breaking its own rules by appearing to support a religion."

Or you could try this piece of nastiness pointed out by some girl, which will plainly be used against civilians. (As in us.)

The secret word is Flee