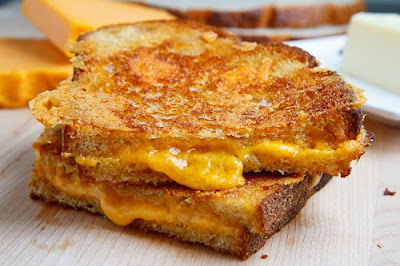 This is a grilled cheese sandwich. Back when I was a gentleman alcoholic living in New York City I would frequently stroll down to Dave’s Diner on Canal Street – just around the corner from the legendary Mudd Club – for a grilled cheese, and maybe an egg cream (that contained neither egg nor cream.) Dave’s made about the best of both in the city and I found them a great comfort during the Reagan era and also passable hangover relief. I suspect, however, that it will take more than a grilled cheese sandwich – even if I could get a proper one in Brighton – to console me if Obama continues to fuck up and the world is placed in the care of Mitt the Multi-Millionaire Mutant Mormon. I never had much time for Harry Truman, a nasty atom-bomb-dropping little bastard, but, some time around 1950, he made this very apt summation of the Republican Party only, But I fear today it is ten times worse.

“Republicans approve of the American farmer, but they are willing to help him go broke. They stand four-square for the American home--but not for housing. They are strong for labor--but they are stronger for restricting labor's rights. They favor minimum wage--the smaller the minimum wage the better. They endorse educational opportunity for all--but they won't spend money for teachers or for schools. They think modern medical care and hospitals are fine--for people who can afford them. They consider electrical power a great blessing--but only when the private power companies get their rake-off. They think American standard of living is a fine thing--so long as it doesn't spread to all the people. And they admire of Government of the United States so much that they would like to buy it.”

Change "Republican" into "Conservative" and each "American/United States" into UK and isnt that where we are now...

the illusion of freedom has raised it's ugly head..none are more hopelessly enslaved than those who falsely believe they are free..any one you know..??
think I'll go back to bed now _

We need to think global. A President of the US can really fuck the whole world.