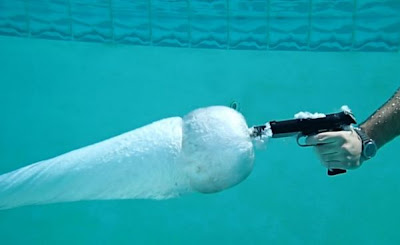 Andrew Tuohy of Vuurwapen Blog captured this high speed shot of a .45 caliber M1911 handgun (one of my favorite pistols) being fired underwater. Did he have to modify it to fire underwater? "Nope," he writes. John Moses Browning knew what he was doing when he invented that Mike Hammer heater.

Wikipedia Note…
Plotting the hints from Marty Robbins’ “El Paso” trilogy of songs, one can determine approximately where to find Rosa’s Cantina. At a juncture about 1.6 miles (2.6 km) NNW of where Texas, Chihuahua, and New Mexico converge, at the bottom of a hill, with a back door from which the narrator can run, there is an actual neighborhood bar called Rosa's Cantina (3454 Doniphan Drive, El Paso TX 79922-1644 (915) 833-0402)
Its ambience lends itself to the lyrics of the three songs.

is there a conflict of interests with your posts today..??..Mao and Mike Hammer, ain't on the same side DoC, there's a million miles between 'em & more ~