THE END IS AT HAND ALL OVER AGAIN 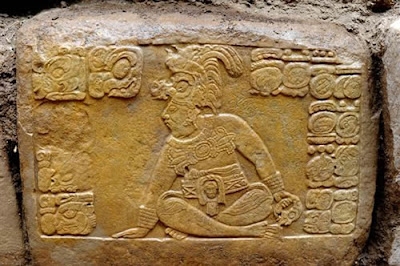 A few months ago archaeologists supposedly laid to rest the idea that time, the universe, and everything would come to end when the Mayan calendar runs out on December 21st of this year. Unfortunately we have another set of researchers who now claim the end may be at hand after all. For my part I’m hoping some of us might come together to stage some kind of event on the last day, either to go out all together, happy and loaded, or laugh at the stupidity of it all.

“Now, researchers exploring the Maya ruins of La Corona in Guatemala have unearthed another reference. On a stairway block carved with hieroglyphs, archaeologists found a commemoration of a visit by Yuknoom Yich'aak K'ahk' of Calakmul, the most powerful Mayan ruler in his day. The king, also known as Jaguar Paw, suffered a terrible defeat in battle by the Kingdom of Tikal in 695. [...] In an effort to tie himself and his reign to the future, the king linked his reign with another 13th cycle — the 13th bak'tun ending on Dec. 21, 2012. David Stuart, a professor of art history at the University of Texas at Austin, recognized the reference to the date among 56 glyphs that were carved on the stone block. "It was a time of great political turmoil in the Maya region, and this king felt compelled to allude to a larger cycle of time that happens to end in 2012," Stuart said in a statement released by UT.”

if ya persist in beating yourself up, u could finish your days a little 'punchy' DoC ~

sit down, have another cig..or a dose of afternoon delight..hahaHa

I'll have a party on 21st of December, it's a Friday anyway, so what the heck?