THE POISONS ARE MELTING 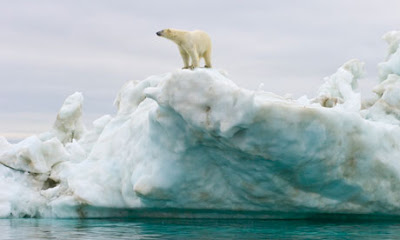 What did Tennessee Ernie Ford tell us? "If the left one don’t get you the right one will"?

“The warming of the Arctic is releasing a new wave of banned toxic chemicals that had been trapped in the ice and cold water, scientists have discovered. The researchers warn that the amount of the poisons stockpiled in the polar region is unknown and their release could "undermine global efforts to reduce environmental and human exposure to them." The chemicals seeping out as temperatures rise include the pesticides DDT, lindane and chlordane, made infamous in Rachel Carson's 1962 book Silent Spring, as well as the industrial chemicals PCBs and the fungicide hexachlorobenzine (HCB). All of these persistent organic pollutants (Pops) are banned under the 2004 Stockholm Convention. Pops can cause cancers and birth defects and take a very long time to degrade, meaning they can be transported for long distances and accumulate over time. Over past decades, the low temperatures in the Arctic trapped volatile Pops in ice and cold water. But scientists in Canada and Norway have now discovered that global warming is freeing the Pops once again.” (Click here for more)
Posted by Mick at 7/27/2011 07:29:00 AM

I have problems understanding why there is even a climate-change debate. On the one hand, there's some obsure wankery about Medieval tree-rings and an email containing the word trick. On the other hand, there are polar bears sailing icebergs down from the Arctic.

OR.
On one hand there is a nearly unanimous scientific community, citing empirical research,
AND
On the other hand are the people who caused the problem in the first place. The same people who got rich from all those poisons leeching back into the food chain.
Can you say "CYA at all COSTS!"