I WAS THE EGG MAN 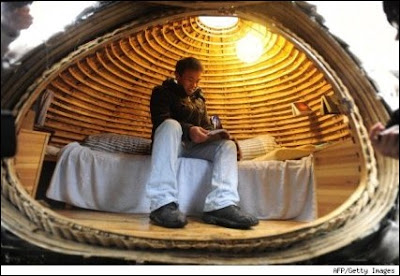 When I stumbled across this on the web, it looked vaguely familiar. Then I realised why. Back in Detroit in the 1970s, in a bar with Boss Goodman and Brother Wayne Kramer, I accidently took far too much really bad PCP thinking it was cocaine. In a subsequent dream/hallucination/nightmare, I found myself in a pod very like this. I assumed I’d died and reverted to the basic DNA helix. Later I woke up and everyone was very pissed off with me. Seemingly I had not been a quiet corpse.

“Environmentalists might just approve of this cheap housing, a mobile egg-shaped home covered in bamboo and grass seed-filled burlap sacks. But will it catch on as a real living space? Dai Haifei, a 24-year-old Beijing architect who developed the egg home, had been living in it on a sidewalk in the high-rent Chinese city for almost two months, until it was ordered removed by city managers who said it didn't conform to housing standards, according to the Beijing Review. The 6-foot-high, solar-powered home is just big enough for a small bed and a tiny dresser. Pegs hanging on the wall can hold books and articles of clothing. Although there's no kitchen, a water pump system stored under the bed can keep water for basic washing for about three days. There doesn't seem to be signs of a toilet, but perhaps a pot works just fine.” Click here for more."

The secret word is Encapsulate