I THINK I’D RATHER GO BY TRAIN 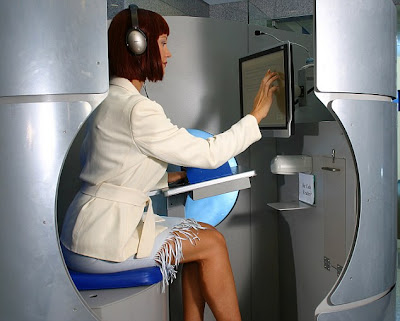 Seemingly a new generation of airport security devices is almost upon us, and these would appear to be a first set towards electronic mind-reading devices. I idly ask myself what other questions, over and above “are you a terrorist”, their operators might take it on themselves to ask.

“Suspect Detection Systems is essentially an automatic polygraph. It consists of a booth in which the passenger sits, wearing headphones and responds to questions that are both spoken and appear on a screen. Sensors record data ranging from the skin's electrical conductivity to movement, both from the eyes and from the subject's left hand, which rests in a special cradle. The subject facing automatic interrogation doesn't even have to answer the machine's yes/no questions in order to record a response, and some of those questions will be very basic: 'Are you involved in terrorist activity?' or, 'Are you carrying explosives?' 'Suicide terrorists aren't scared of dying,' says Drukman, 'but they are scared of being caught. That gives us the hook.' SDS's detector depends on the fact that physical responses to such questions, aggregated and analysed by a computerised algorithm, are involuntary. Most subjects will be cleared after just one minute. A small minority will face more questions lasting a further five to seven minutes, following which the machine will decide whether they should be cleared or be interrogated by humans. The booths also record passport and other ID information, which can be stored.” (Click here for the full story)

Does this remind you of Blade Runner? Looking for replicant/terrorists.