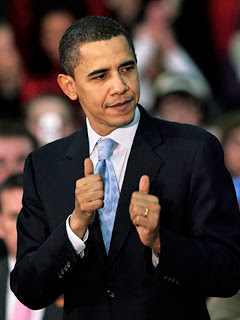 By way of a postscript to yesterday’s post, President Obama, at a meeting of what the media call “lawmakers”, reportedly put the Republicans in their place with just two words. “I won.”

Munz also sent us an encouraging report from Entertainment Weekly that Obama not only carries an iPod but has it loaded with Dylan, Springsteen, the Grateful Dead and “A lot of Coltrane, a lot of Miles Davis, a lot of Charlie Parker.”

But less encouraging are reports are circulating that Obama may have bowed in some degree to Republican pressure, and that too much of the $800 billion stimulus package will be devoted to tax cuts – which do nothing for the growing army of unemployed – instead of the massive FDR-style public works programs that were promised.

When hungry and without money, I've never felt an urge to call for a corporate tax cut.

A neocon would say that I am naive about the complexity of the problem.

No really, the WV is redistu. Needs an r.

I haven't met too many problems that didn't repond to having money thrown at them.

Damn it! That should be "respond".

If the problem is money, I can't see how throwing money at it will help. S'like "fighting fire with fire" - professionals use water

The problem isn't money, per se, it's a lamentable lack of it. Thus, extending the firefightly analogy, it's like fighting drought with water.

WV is word verification. The anti-spam device you have to type in if you want to post a comment. Lately it's been forming crypto-words. (You maybe don't confront it if you're already signed in to Google or Blogger.)

Oh! Thanks. I thought maybe it was some kinda custom I didn't know about. I got one that said "Deribbl" first time I tried to comment...sounded ominous. This one's "Scepia" which I figure to be a brownish disbelief.

You've got the hang of it, bro.