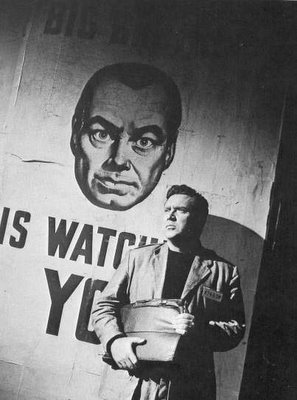 BILL O’REILLY IS OFFICIALLY INSANE
Amid all the other stuff that’s going – like Bush’s efforts to convince us he’s busy negotiating some kind of nuclear peace between India and Pakistan – Bill O"Reilly has been in a pissing contest with our pal Keith Olbermann on MSNBC. After Olbermann voted O’Reilly "Worst Person In The World" three days in a row, O’Reilly entered dementia. He screamed for Olbermann to be fired and then, when a call-in caller (admittedly a known troublemaker) mentioned Olbermann’s name, the following ensued...

From the March 2 broadcast of Westwood One's The Radio Factor with Bill O'Reilly:
O'REILLY: Orlando, Florida, Mike, go.
CALLER: Hey Bill, I appreciate you taking my call.
O'REILLY: Sure.
CALLER: I like to listen to you during the day, I think Keith Olbermann's show --
O'REILLY: There ya go, Mike is -- he's a gone guy. You know, we have his -- we have your phone numbers, by the way. So, if you're listening, Mike, we have your phone number, and we're going to turn it over to Fox security, and you'll be getting a little visit.
HILL: Maybe Mike is from the mothership.
O'REILLY: No, Maybe Mike is going to get into big trouble, because we're not going to play around. When you call us, ladies and gentleman, just so you know, we do have your phone number, and if you say anything untoward, obscene, or anything like that, Fox security then will contact your local authorities, and you will be held accountable. Fair?

And O’Reilly wasn’t kidding or doing a bit. The lunatic really feels he has the juice to dime out any caller he doesn’t idelogically cotton to. Weird shit, neighbors. Stories are now being bandied around of O"Reilly callers who have been subsequently threatened by some phone heavy claiming to be from Fox Security. Which, if real, really do mean that Roger Ailes thinks he’s running the Ministry of Truth.

CRYPTIQUE -- Ashlee Simpson was born in 1984

Eventually, I hope, I think, I keep expecting, someone will stand up and say it, and for some reason, this time, the last time, will be the first time everybody will see it for what it is all at once. At long last, sir, have you no decency? O'Reilly's no McCarthy, and he's no dummy either, but when callers are threatened -- a "warning" this is not -- you can't warn somebody you're about to blow your stack. That's a threat, actually assault. It is assault even BEFORE the "heavy claiming to be from Fox Security" calls. I wonder what was said. It would be interesting to know. Because more people rely on Fox News for their news than any other network, so they say. This could be why I often feel like I'm speaking to a vacuum. It's an upright vacuum. It sucks. But it is smarter than Bill O'Reilly, who deserves a vacuum.

Also... did you notice that's Bill Kurtis on that poster?