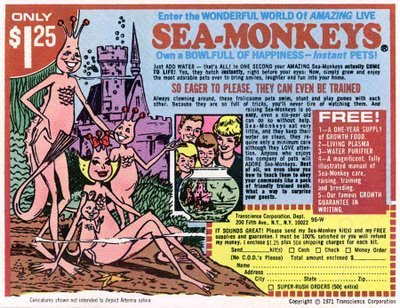 Farren, you were one fucking dumb-ass kid.

Dumb ass? Oh bullshit, you weren't too clear on where you'd find it, but you still believed in magic. Where better to find it than on the back of a comic book? OK, so that was a let down. Still searching though, aren't you. I am.

"So eager to please, they can even be trained..." Yeah, right.

Mick, as a joke, I bought some for our old pal Russell on his birthday a few years ago. Needless to say, they cost a lot more than a buck and a quarter these days...

I feel your pain, bro. The REAL bitch is that, once you discovered they were just plain 'ol brine shrimp, they were so small that they'd get lost in the batter and the hot oil would just incinerate 'em.

My Sea Monkeys were fucking brilliant, they lived in a little castle drove little aqua cars and grew up to have meaningful careers, one as a conservative cabinet minister, one as a priest and one as the lead singer of Megadeath.

The X Ray specs were also excellent, saw straight through ladies clothing, which meant that there was never a reason to get yer mates big brother to go and buy a copy of Health and Efficiency(God how I miss that publication....), and as for the Dan Dare Radio Station, it really was perfect, being able to talk directly to Mekonta without so much as a bit of crackle or distortion. Of course the only problem with that was finding a bit of string long enough to stretch from the Earth to Venus.

But lets face it the crowning fucking glory was the Footlocker Toy Storage Box with 200 durable plastic toy soldiers. These guys were really good. Eat yer heart out General Jumbo.

Hell, Nostalgia ain't wot it used to be, I'm off down the pub for a milk stout and a packet of crisps with the little blue packet of salt in it.......

The secret is this, motherfuckers: the sea monkeys were first uncovered by CIA agents in a coptic vase between 1947 and 1951 as part of an ongoing investigation into the Dead Sea Scrolls.

Only Philip K. Dick was aware of this, due to excessive exposure first to strontium irradiated amphetamine, and subsequently as the result to exposure to LSD 25 in a botched U.S. government sponsored assassination attempt.

Leakage of the existence of Sea Monkeys and the "Living Word Of God'" was universally discredited in the 1960's through the utilization of illustrated advertising in DC and Marvel Comics.

Fuck you very much.

I just couldn't handle the whole sea monkey nuclear family ideal, micro organisms that wore crowns and might as my child mind saw it leave the confines of their fish-bowl penitentiary and attack me while I slept. And now you tell me they were actually brine shrimps!?
But they must have been radioactively mutated shrimp families right?
who would break loose from their glass jail and attack me while I slumbered.
The Horror, the Horror!

This was about the one thing I never ordered from the Ellisdons catalogue, LOL

Michael,
You know perfectly well that what really changed your life were those trashy, high-heeled Cinderella glitter slippers you were always sending off for.

They are essential if you go in for tropical fish breeding because they make ideal food for newly-hatched fry!