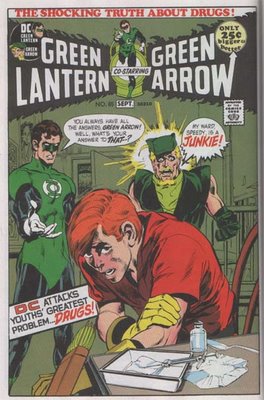 It’s never easy for a superhero when his teen-boy sidekick start shooting up. But weren’t Green Arrow and Green Lantern more than lame enough to drive anyone to serious narcotics?

MO DRUG WAR
In this week’s LA CityBeat, I have not one, but two drug related pieces. The first on the FDA’s absurd statement that marijuana has no medical value...
http://lacitybeat.com/article.php?id=3729&IssueNum=153#

And also a more fanciful musing on the possible Mexican legalization of the personal stash...
http://lacitybeat.com/article.php?id=3737&IssueNum=153

The secret word is Psychotropic 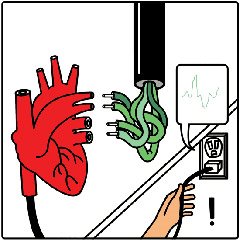 And dare we hope Boss Goodman might be on the mend? (Check "bulletins")
http://www.mannorak.com/index.htm 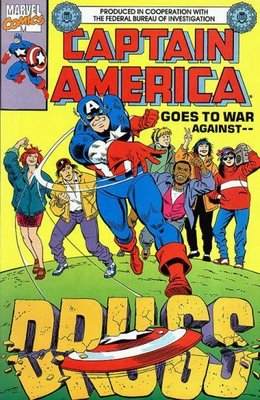 DON’T YOU JUST ADORE THE DRUG WAR?
The following news report fell from the trailer park blue without attribution...
"Authorities say about 40 people were evacuated from a Walgreens after a methamphetamine laboratory was found in the trunk of a car in the store's parking lot. Sheriff officials say 45-year-old Michael Wright, 19-year-old Jodie Duncan and 31-year-old Jeremie Messer, all of Ashland, Alabama were arrested. They are charged with conspiracy to manufacture meth, unlawful possession of listed chemicals and marijuana possession. Authorities got a tip that the group was visiting several drug stores buying cold medicine, which is used to make meth. On the other hand, the drive-thru traffic was moving at a rather brisk pace."

In the matter of Captain America, someone at Marvel seems to have been so star at cooperating with the FBI that they forgot how Cap. A himself was a drug created creature, having been transformed from scrawny arts major Steve Rogers by injections of the Super Soldier Serum developed by Dr. Emil Erskine, that had driven earlier test subjects violently insane.

The secret word is Higher

QUOTE OF THE LAST MILLENNIUM
"There is nothing more difficult to plan, more doubtful of success, nor more dangerous to manage than the creation of a new system. For the initiator has the enmity of all who would profit by the preservation of the old system and merely lukewarm defenders in those who would gain by the new one." -Machiavelli, 1513

AND FINALLY SOME FUN...
sent by gilfane (turn on your speakers)
http://vadeodd.ytmnd.com/ 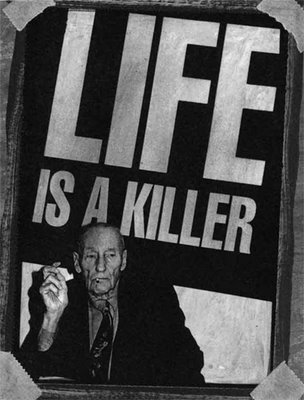 STEPHEN COLBERT WAS NOT FUNNY
By Dave V. (edited slightly by RM)
Stephen Colbert was not funny.
Helen Thomas is old and batty.
Mexicans are taking our jobs.
Iraq sent its WMDs to Syria.
Democrats don't want to wiretap terrorists.
Joe Wilson admitted that Valerie Plame wasn't covert.
Tom DeLay is like Jesus Christ.
Karl Rove has a faulty memory.
Scooter Libby has a faulty memory.
No one could have anticipated that the levees would be breached.
We do not torture.
There is no global warming.
There is global warming, but humans aren't causing it.
Howard Dean can't raise money.
John Kerry is a flip-flopper.
George W. Bush is a decider.
John McCain is a straight shooter.
Dick Cheney is a sober shooter.
Nobody at the White House knows Jack Abramoff.
Democrats do.
The economy is doing great.
Evolution isn't supported by the facts.
Diebold voting machines are secure.
Fox News is fair and balanced.
Mission accomplished.
Bill Clinton did it too.
No one could have anticipated the Iraqi insurgency.
The budget deficit will be cut in half in four years.
Anyone who thinks Dubai shouldn't control our ports is racist.
No one who thinks we should build a wall along the Mexican border is racist.
George Allen isn't a racist . . . anymore.
Terry Schiavo wants to live.
Andrea Clark wants to die.
We've turned a corner in Iraq.
There is a war on Christmas.
There is a war on Easter.
There is no civil war in Iraq.
The British government has learned that Saddam Hussein recently sought significant quantities of uranium from Africa.
Bush won Florida in 2000.
Losing by 2 million votes in 2000 is a mandate.
This administration will hold itself accountable.
Brownie did a heck of a job.
Kathleen Blanco never asked for federal help.
Ray Nagin should have used the buses.
Gay couples seek to destroy marriage.
Man existed alongside the dinoraurs.
The earth is 6,000 years old.
America is a Christian nation.
George W. Bush is a Christian man.
George W. Bush is a great guy to have a beer with.
George W. Bush is a war hero. John Kerry isn't.
John Kerry outed Mary Cheney.
John Kerry shot himself in the leg to earn his medals.
Al Gore thinks he invented the Internet. Franklin D. Roosevelt was a communist and a terrible president.
Ronald Reagan was the best president in history.
Hillary Clinton will be the Dem nominee in 2008.
Bill Clinton caused 9/11.
Bill Clinton was offered Bin Laden on a silver platter and turned it down.
Saddam Hussein attacked us on 9/11.
No one could have anticipated airplanes flying into buildings.
We have removed the Taliban from Afghanistan. The Iraqis will welcome us with open arms and flowers.
It could take six days, six weeks - I doubt six months.
Pat Tillman was killed by enemy fire.
Yellow magnet car ribbons help the troops.
The insurgency is in its last throes.
They hate us for our freedom.
The only way to get Zarqawi is to invade Iraq.
We're fighting them over there so we don't have to fight them over here.
When they stand up, we'll stand down.
Iraqi oil will pay for the war and the reconstruction.
Gas prices are high because of liberal environmentalists.
Gas prices are high because of taxes.
Drilling in the Alaska National Wildlife Refuge will lower the price of oil.
Unemployment numbers have never been so low.
Outsourcing will create more jobs.
The vast majority of Bush's tax cuts go to the bottom end of the spectrum.
Tax breaks for Hummers are good for the economy.
Tax cuts increase federal revenue.
The estate tax hurts family farms.
Private accounts will save Social Security.
Bush will make health insurance affordable for low-income families.
The Healthy Forests Initiative will help forests.
No Child Left Behind will help children.
The Clear Skies Initiative will reduce air pollution.
Republicans are compassionate conservatives.
Republicans are pro-life.
Nothing is more important in a time of war than cutting taxes.
Democrats hate America.
Hillary Clinton murdered Vince Foster.
"Bin Laden Determined to Strike within the U.S." was a historical document.
The national anthem should only be sung in English.
Jesus would have voted for Bush.
Whenever we say "wiretap," that means we're going to get a court order.
Chris Matthews will not let anything get by him.
George Bush was a successful businessman.
The government is tapping your phone to protect you.
Dissent is unpatriotic.
Valerie Plame is a traitor.
Patrick Fitzgerald is going to indict Joe Wilson.
Jeff Gannon is a serious journalist.
Rush is right.
The media is liberal.
You're either with us or against us.
A vote for John Kerry is a vote for Al Qaeda.
George Bush doesn't read the polls.
Congress had access to the same intelligence.
Iraq is the central front on the war on terrorism.
Republicans are the party of ideas.
Those trucks we found in Iraq were mobile biological weapons labs.
We know where the WMD are.
Anyone who leaks information will no longer be part of this administration.
Sex education causes STDs and increases pregnancy rates.
HPV vaccine will cause teen sex cults.
Harriet Miers would be a great Supreme Court justice.
Vice President Cheney no longer has ties with Halliburton.
Bush will restore honor and integrity to the White House.
Up is down.
Black is white.
Oceania has always been at war with Eurasia. 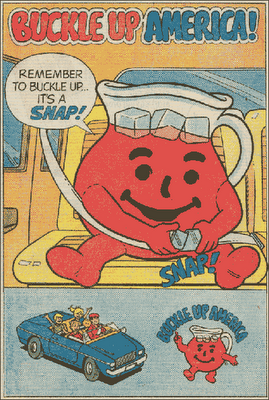 And you won't forget the Kool Aid, will you, Mr Jones? 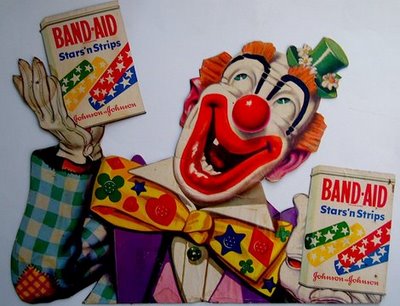 Do I really need to comment on this or shall we just start searching the crawlspace under the house? 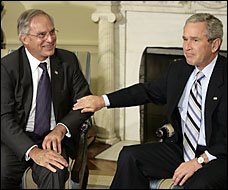 THE FALL OR JUST WISHFUL THINKING?
This is what it said in the Washington Post..."Porter J. Goss was forced to step down yesterday as CIA director, ending a turbulent 18-month tenure marked by an exodus of some of the agency's top talent and growing White House dissatisfaction with his leadership during a time of war."
But I’m wondering what the Vegas odds might be that Goss has really gone because – while singing like a fucking canary on his way to jail – former Rep. Randy "Duke" Cunningham (R-Rancho Santa Fe) fingered Goss as a face at the hooker parties at the Watergate and other defense contractor bribery shenanigans. Oh my, is the entire house of cards actually collapsing for real?

The secret word is Glee 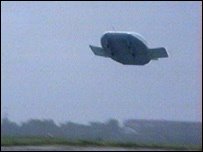 THEY’RE BACK!
Aeswiren (an old friend under a new name) sends this BBC interview with a hacker who claims to have accessed genuine government UFO data...
http://news.bbc.co.uk/2/hi/programmes/click_online/4977134.stm

And also a nice bit of Neil Young to listen to...
http://action.truemajority.org/campaign/living_with_war