A POEM FOR THE WEEKEND 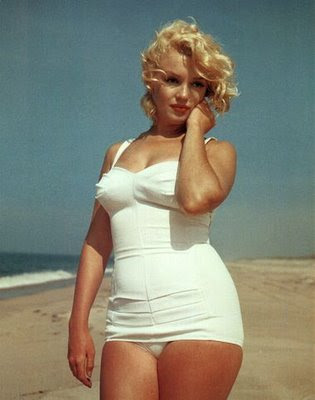 Here at Doc40, it seems we can’t go a month or more without running a picture of Marilyn Monroe. This time, I’ve added a poem by Delmore Schwartz (who was also a mentor of Lou Reed.)

LOVE AND MARILYN MONROE
by Delmore Schwartz
(after Spillane)

Let us be aware of the true dark gods
Acknowledgeing the cache of the crotch
The primitive pure and pwerful pink and grey private sensitivites
Wincing, marvelous in their sweetness, whence rises the future.

Therefore let us praise Miss Marilyn Monroe.
She has a noble attitude marked by pride and candor
She takes a noble pride in the female nature and torso
She articualtes her pride with directness and exuberance
She is honest in her delight in womanhood and manhood.
She is not a great lady, she is more than a lady,
She continues the tradition of Dolly Madison and Clara Bow
When she says, "any woman who claims she does not like to be grabbed is a liar!"
Whether true or false, this colossal remark states a dazzling intention...

It might be the birth of a new Venus among us
It atones at the very least for such as Carrie Nation
For Miss Monroe will never be a blue nose, and perhaps we may hope
That there will be fewer blue noses because she has flourished
Long may she flourish in self-delight and the joy of womanhood.
A nation haunted by Puritanism owes her homage and gratitude.

Let us praise, to say it again, her spiritual pride
And admire one who delights in what she has and is
(Who says also: "A woman is like a motor car:
She needs a good body."
And: "I sun bathe in the nude, because I want to be blonde all over.")
This is spiritual piety and physical ebullience
This is vivd glory, spiritual and physical,
Of Miss Marilyn Monroe. 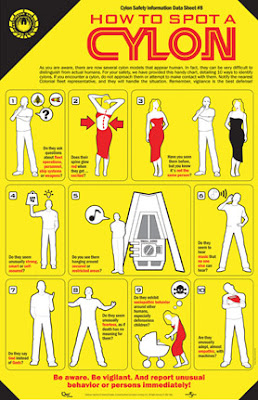 Okay, so it’s Battlestar Galactica merchandise, and I find myself having increasingly more sympathy with the Cylons, but this merch is so damned well designed, here’s a link. (Sent by Some Girl)

Meanwhile Valerie sends us this clip from the New Scientist in which Tom Simonite speculates that humans are really fucking boring on a galllactic level. “Messages sent into space directed at extraterrestrials may have been too boring to earn a reply, say two astrophysicists trying to improve on their previous alien chat lines. Humans have so far sent four messages into space intended for alien listeners. But they have largely been made up of mathematically coded descriptions of some physics and chemistry, with some basic biology and descriptions of humans thrown in. Those topics will not prove gripping reading to other civilisations.” (Click for more)

The secret word is Vigilance 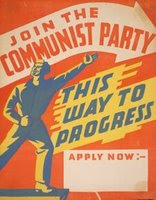 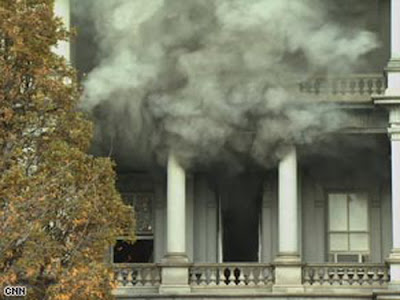 Maybe someone allowed a chink in the curtains. The sunlight prenetrated the vice presiental gloom, and his attendant vampires conflagrated?

The secret word is Undead

Or would you rather watch a Doc Marten commercial that was banned in the UK? 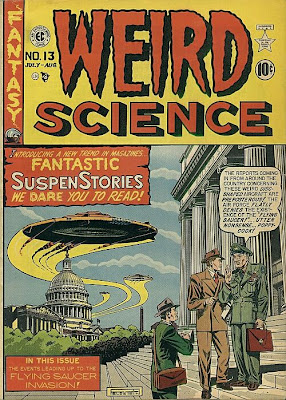 Saturday’s excursion out to the frontiers of science instigated by Sky Element 115 seems have gleaned a few more links to the outer limits of our knowledge.

KILLER BLACK HOLES
Noudela sent us this amazing video clip of a particle beam being projected from a black hole. Which is aces. And this is the news report that goes with it from Some Girl.

ZOMBIES
Jon posted this link on comments to much that you might need to know about Zombies.
"Zombies are hypothetical creatures of the sort that philosophers have been known to cherish. A zombie is physically identical to a normal human being, but completely lacks conscious experience. Zombies look and behave like the conscious beings that we know and love, but "all is dark inside." There is nothing it is like to be a zombie."

AND HOW WE SEEM TO BE EVOLVING AT AN ALARMING SPEED
Ink-Stained Wretch sent us this intriguing report that humanity appears to be evolving faster that we should be.
"Humans have moved into the evolutionary fast lane and are becoming increasingly different, a genetic study suggests. In the past 5,000 years, genetic change has occurred at a rate roughly 100 times higher than any other period, say scientists in the US.
This is in contrast with the widely-held belief that recent human evolution has halted." (Click for the full fascinating story)
Posted by Mick at 12/17/2007 11:44:00 PM 2 comments: 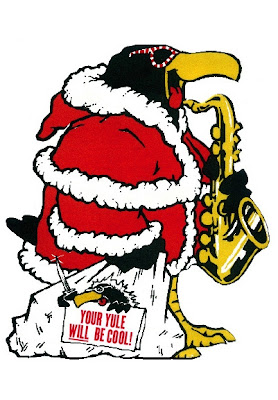 I’m not even sure about this myself. Should I do it? Or would it be gauche or bad form? From Counter Punch to Susie Bright I see all these blogs and static websites having what they call fund raising appeals to cover their operating expenses. Now I couldn’t say that Doc40 exactly had operating expenses, and we don’t take adds or (so far) sell you stuff, but funds are a constant headache, so being the Yule and all, I shed all shame and say what the fuck? The sensei puts out his begging bowl. Let’s have a one-time fundraiser. So Paypal contributions or Amazon gift vouchers or whatever will be very welcome at byron4d@msn.com (The illustration, by the way is an original by the later lamented Edward Barker, who I miss greatly.)

The secret word is Cheer