I said I wouldn't mention her this weekend, but this is damned important. The following comes from Anthony Ausgang via Elf Hellion…

“Let's spend a few moments browsing the list of books Mayor Sarah Palin tried to get town librarian Mary Ellen Baker to ban in the lovely, all-American town of Wasilla , Alaska . When Baker refused to remove the books from the shelves, Palin threatened to fire her. The story was reported in Time Magazine and the list comes from the librarian.net website.”

SARAH PALIN'S BOOK CLUB
A Clockwork Orange by Anthony Burgess
A Wrinkle in Time by Madeleine L'Engle
Annie on My Mind by Nancy Garden
As I Lay Dying by William Faulkner
Blubber by Judy Blume
Brave New World by Aldous Huxley
Bridge to Terabithia by Katherine Paterson
Canterbury Tales by Chaucer
Carrie by Stephen King
Catch-22 by Joseph Heller
Christine by Stephen King
Confessions by Jean-Jacques Rousseau
Cujo by Stephen King
Curses, Hexes, and Spells by Daniel Cohen
Daddy's Roommate by Michael Willhoite
Day No Pigs Would Die by Robert Peck
Death of a Salesman by Arthur Miller
Decameron by Boccaccio
East of Eden by John Steinbeck
Fallen Angels by Walter Myers
Fanny Hill (Memoirs of a Woman of Pleasure) by John Cleland
Flowers For Algernon by Daniel Keyes
Forever by Judy Blume
Grendel by John Champlin Gardner
Halloween ABC by Eve Merriam
Harry Potter and the Sorcerer's Stone by J.K. Rowling
Harry Potter and the Chamber of Secrets by J.K. Rowling
Harry Potter20and the Prizoner of Azkaban by J.K. Rowling
Harry Potter and the Goblet of Fire by J.K. Rowling
Have to Go by Robert Munsch
Heather Has Two Mommies by Leslea Newman
How to Eat Fried Worms by Thomas Rockwell
Huckleberry Finn by Mark Twain
I Know Why the Caged Bird Sings by Maya Angelou
Impressions edited by Jack Booth
In the Night Kitchen by Maurice Sendak
It's Okay if You Don't Love Me by Norma Klein
James and the Giant Peach by Roald DahlLady Chatterley's Lover by D.H. Lawrence
Leaves of Grass by Walt Whitman
Little Red Riding Hood by Jacob and Wilhelm Grimm
Lord of the Flies by William Golding
Love is One of the Choices by Norma Klein
Lysistrata by Aristophanes
More Scary Stories in the Dark by Alvin Schwartz
My Brother Sam Is Dead by James Lincoln Collier and Christopher Collier
My House by Nikki Giovanni
M y Friend Flicka by Mary O'Hara
Night Chills by Dean Koontz
Of Mice and Men by John Steinbeck
On My Honor by Marion Dane Bauer
One Day in The Life of Ivan Denisovich by Alexander Solzhenitsyn
One Flew Over The Cuckoo's Nest by Ken Kesey
One Hundred Years of Solitude by Gabriel Garcia Marquez
Ordinary People by Judith Guest
Our Bodies, Ourselves by Boston Women's Health Collective
Prince of Tides by Pat Conroy
Revolting Rhymes by Roald Dahl
Scary Stories 3: More Tales to Chill Your Bones by Alvin SchwartzScary Stories in the Dark by Alvin Schwartz
Separate Peace by John Knowles
Silas Marner by George Eliot
Slaughte rhouse-Five by Kurt Vonnegut, Jr.
Tarzan of the Apes by Edgar Rice Burroughs
The Adventures of Huckleberry Finn by Mark Twain
The Adventures of Tom Sawyer by Mark Twain
The Bastard by John Jakes
The Catcher in the Rye by J.D. Salinger
The Chocolate War by Robert Cormier
The Color Purple by Alice Walker
The Devil's Alternative by Frederick Forsyth
The Figure in the Shadows by John Bellairs
The Grapes of Wrath by John20Steinbeck
The Great Gilly Hopkins by Katherine Paterson
The Handmaid's Tale by Margaret Atwood
The Headless Cupid by Zilpha Snyder
The Learning Tree by Gordon Parks
The Living Bible by William C. Bower
The Merchant of Venice by William Shakespeare
The New Teenage Body Book by Kathy McCoy and Charles Wibbelsman
The Pigman by Paul Zindel
The Seduction of Peter S. by Lawrence Sanders
The Shining by Stephen King
The Witches by Roald Dahl
The Witches of Worm by Zilpha Snyder
Then Again, Maybe I Won't by Judy Blume
To Kill A Mockingbird by Harper Lee
Twelfth Night by William Shakespeare
Webster's Ninth New Collegiate Dictionary by the Merriam-Webster Editorial Staff
Witches, Pumpkins, and Grinning Ghosts: The Story of the Halloween Symbols by Edna Barth

But I’m truly bummed none of my books made the list. Persecution envy? 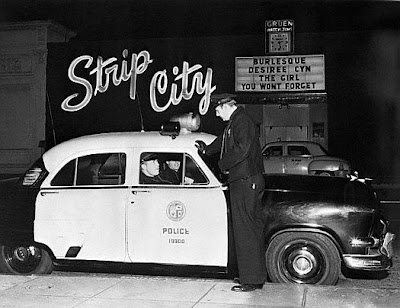 “Republicans need to stop saying Barack Obama is an elitist, or looks down on rural people, and just admit you don't like him because of something he can't help, something that's a result of the way he was born. Admit it, you're not voting for him because he's smarter than you.” – Bill Maher

Thank heavens the absurd political conventions have gone away. The whores and strippers can relax, and, for the rest of us, life and TV can return to some semblance of what’s laughingly called normality. I did actually enjoy the Democrats – Teddy, Bill, Joe Biden, even Hillary, and, of course, Barak, who now, essentially, has to save the world for white people. But the Republicans were even more awful than I had expected, with their lies and their hypocrisies, their flags and their deceptions, and if those bastards in any way return to power, we are fucked. I mean fucked. Self-proclaimed heterosexuals trumpeting “small town values” while they are at a loss to define, simply cannot be given control of our world for any longer or we will have no world. I guess, next week, we have to commence the real tooth and claw infighting. Here at Doc40, we pledge to go both the distance and for the jugular, but, in the meantime, I could use a stiff drink and a long lay down.

The secret word is (yet again) Oil

Another pic stolen from Tom Sutpen

THE PHOTOSHOP IS GETTING OUT OF HAND 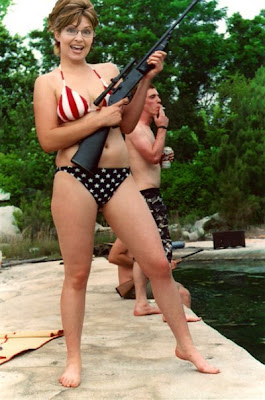 JUST HOW STUPID DO THEY THINK WE ARE? 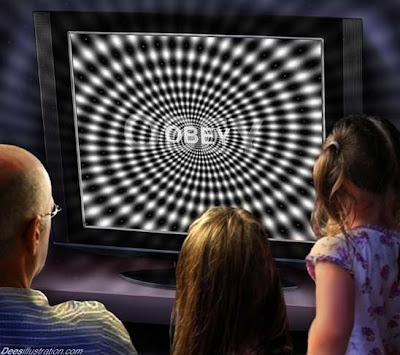 Doug the Bass sent this other piece by Sam Harris in the LA Times. I couldn’t have said it better myself.

"Americans have an unhealthy desire to see average people promoted to positions of great authority. No one wants an average neurosurgeon or even an average carpenter, but when it comes time to vest a man or woman with more power and responsibility than any person has held in human history, Americans say they want a regular guy, someone just like themselves. President Bush kept his edge on the “Who would you like to have a beer with?” poll question in 2004, and won reelection.
This is one of the many points at which narcissism becomes indistinguishable from masochism. Let me put it plainly: If you want someone just like you to be president of the United States, or even vice president, you deserve whatever dysfunctional society you get. You deserve to be poor, to see the environment despoiled, to watch your children receive a fourth-rate education and to suffer as this country wages – and loses – both necessary and unnecessary wars. McCain has so little respect for the presidency of the United States that he is willing to put the girl next door (soon, too, to be a grandma) into office beside him. He has so little respect for the average American voter that he thinks this reckless and cynical ploy will work." 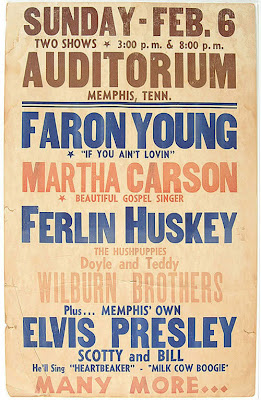 Seemingly, if you own one of these posters, you're rich. They command prices of around $25,000.

The secret word is Elvis

IS IT REAL OR IS IT PHOTOSHOP?

Looking carefully at the original copy of the pic, in all fairness, I would say the face was photo-shopped on to the hair and body, but I don't care. This woman has to be stopped!

“But even if Obama were precisely as religious as he appears, he is not a Creationist, Rapture-Ready blockhead. Palin, by all appearances, seems to be one. This is a difference worth noting. Whatever you may think of his politics, Obama is very intelligent and reasonably well educated. Palin thinks the universe is 6000 years old.” – Sam Harris, LA Times
"There is a tendency in the media to kick ourselves, cringe and withdraw, when we are criticized. But I hope my colleagues stand strong in this case: it is important for the public to know that Palin raised taxes as governor, supported the Bridge to Nowhere before she opposed it, pursued pork-barrel projects as mayor, tried to ban books at the local library and thinks the war in Iraq is "a task from God." The attempts by the McCain campaign to bully us into not reporting such things are not only stupidly aggressive, but unprofessional in the extreme." -- Joe Klein, Time
Some girl – who hasn’t been around that much of late – sent the pic. Doug the Bass sent the Sam Harris quote.
Posted by Mick at 9/03/2008 07:16:00 PM 6 comments:

Any alternative. Anything has to be better than McCain/Palin. (Do I watch her speech, or drink myself unconcious?) Please...I don't think I can take much more. (Click here)

You wanna talk experience? The guy played professional Russian roulette, could see the future, was King of New York, and an archangel. Match that, bitch! I may well write more later. Right now I am drawn helplessly to the TV and the Republican Convention. Images of smug, vicious, overfed, white people wallowing in their certainty have a horrific magnetism. Especially when they dance to Chuck Berry playing "Johnny Be Good", knowing evil ol' Chuck would like to piss on them from a great height. If this is humanity, extinction can't come too soon. I would even volunteer to go first. Especially on a birthday when nary a friend calls. (Click here)

The secret word is Hide 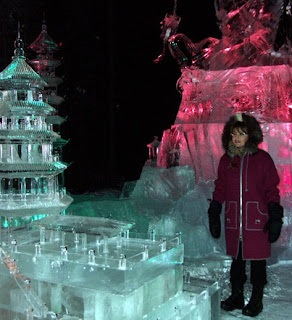 MoveOn.org sent this fast fact sheet on the stunningly unqualified Ms Palin, standing above in a some tacky winter wonderland. She has to be an expression of John McCain’s total contempt for the electorate.

She was elected Alaska's governor a little over a year and a half ago. Her previous office was mayor of Wasilla, a small town outside Anchorage. She has no foreign policy experience.

Palin is strongly anti-choice, opposing abortion even in the case of rape or incest.

Palin thinks creationism should be taught in public schools.

She's doesn't think humans are the cause of climate change.

She's solidly in line with John McCain's "Big Oil first" energy policy. She's pushed hard for more oil drilling and says renewables won't be ready for years. She also sued the Bush administration for listing polar bears as an endangered species-she was worried it would interfere with more oil drilling in Alaska.

How closely did John McCain vet this choice? He met Sarah Palin once at a meeting. They spoke a second time, last Sunday, when he called her about being vice-president. Then he offered her the position. 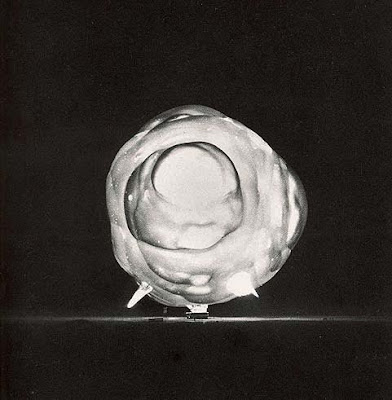 Here’s another first nano-second photograph of a nuclear blast for those who like them. We could be seeing them first hand if there’s McCain/Palin victory. 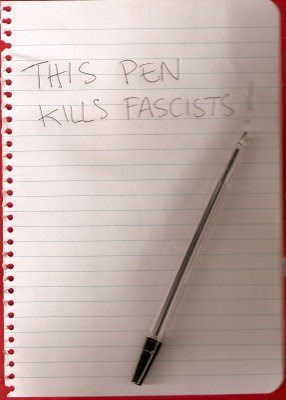