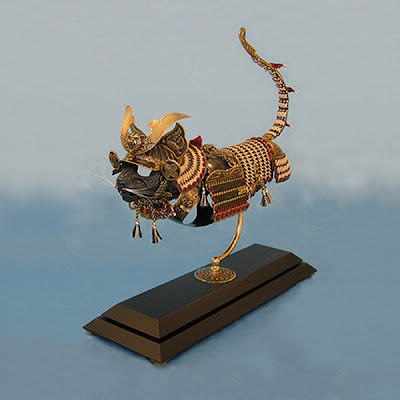 (That’s Kitty-san to you, gaijin.)
Having read the piece below and aware that armed Europeans surround him, Newton is now lobbying for a suit of samurai cat armor. (Thanks Valerie)
Posted by Mick at 6/21/2007 12:44:00 AM 1 comment:

FIRST TO CATCH A BULLET IN AMERICA 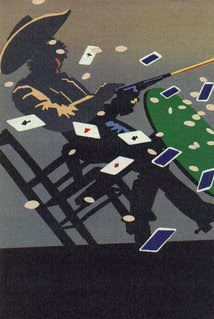 Both MrMR and some girl have sent over versions of this fascinating report about the discovery of what might be the first shooting victim in the New World. We particularly like the line – “The individual may have been escaping from the Europeans.” (And, of course, the victim was an Inca, not a cowboy playing poker. I just liked the pic.)

"Archaeologists in Peru have uncovered the human skeleton of what they conclude is the earliest known gunshot victim in the New World. Digging in an Inca cemetery in the suburbs of Lima, they came on well-preserved remains of an individual with holes less than an inch in diameter in the back and front of the skull. Forensic scientists in Connecticut said the position of the round holes and some minuscule iron particles showed that the person most likely was shot and killed by a Spanish musket ball. Ceramics and other artifacts in the 72 examined graves established the approximate time of the burials, archaeologists said, and this indicated that these were casualties of combat between Inca warriors and Spanish invaders, who seized the Andean empire in 1532. Spanish chronicles describe a pitched battle, a last stand of the Incas that was fought in the vicinity in 1536.
Conquistadors were equipped with some of the first effective firearms, which had been developed recently in Europe, military historians say. The National Geographic Society announced yesterday the discovery of the gunshot victim by the independent Peruvian archaeologists Guillermo Cock and Elena Goycochea, who have conducted research at the Puruchuco cemetery for years. A NOVA-National Geographic television program on the research is scheduled for next Tuesday.
In a telephone interview Monday, Dr. Cock said that at least 35 of the excavated skeletons bore evidence of violent injuries: cheekbones crushed by heavy blows, broken hands and limbs, a smashed chest. Some had presumably fallen in hand-to-hand combat or been trampled by Spanish horses, another instrument of warfare new to the Americas. No similar evidence of a death by gunshot this early has been found elsewhere in the Americas, Dr. Cock said. The musket shot appeared to have entered the back of the man’s skull, punching a piece of bone from outside to inside, and emerged through the face.
“The individual may have been escaping from the Europeans,” the archaeologist said. These particular graves attracted the attention of the excavators because they were shallow and the bodies appeared to have been interred hastily. They were not ritually wrapped in shrouds and placed in a crouched position facing northeast, as was customary in Inca burials. Forensic experts at the University of New Haven, in Connecticut, confirmed the violent nature of the deaths. Albert B. Harper, executive director of the Henry C. Lee Institute of Forensic Science at the university, said, “We tried to rule out all kinds of causes of the hole — a rock from a slingshot, spear, sledgehammer.” An examination of the skull with a scanning electron microscope detected the otherwise invisible iron traces, Dr. Harper said, sealing the verdict of death by a musket ball fired from a range of perhaps 100 feet."
The secret word is Capped
Posted by Mick at 6/21/2007 12:36:00 AM 2 comments: 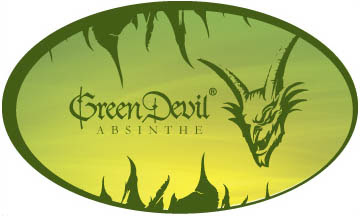 The New York Times discovers absinthe at sixty bucks a bottle. My hope is that it will drive the apple martini crowd drooling insane and then return to being the secret of the bohemian elite. But I’m blind drink and hallucinating on my own green dragon home brew that I am unable to think this through. I will consider it tomorrow. (Thanks to Munz and Alex for the links.)

The secret word is Rimbaud 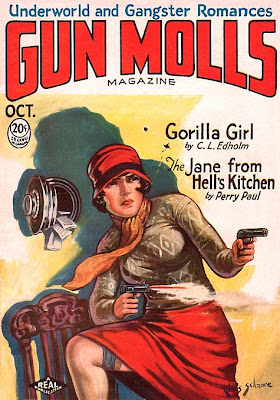 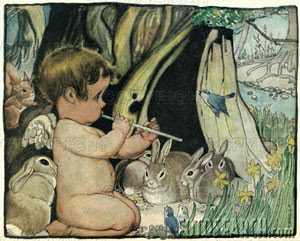 BUT DEFERS DECISION ON BUNNIES

The world rapidly becomes inhabitable. Species hurtle into extinction. The computers are down on the International Space Station. The Greenland Pump may soon cease to function. Nuclear weapons slyly proliferate. In Africa, ten year-olds with AK45s snort cocaine and gunpowder and fight endless, shapeless, wholly pointless wars of asymmetric attrition. Disguised reptiles may govern the United States of America. A month or more ago MrMR sent me the following, but I never posted it. I figured it was too whacked even for Doc40, but in the intervening time, I changed my mind. It’s amazing how time flies when the world is losing its reason.

“The Vatican has determined that limbo does not exist, opening the gates of heaven to babies who die unbaptised. A member of a high-level theological commission made the announcement with the approval of Pope Benedict XVI. "The many factors that we have considered ... give serious theological and liturgical grounds for hope that unbaptised infants who die will be saved." The medieval concept of limbo as a place where unbaptised infants spend eternity but without communion with God seems to reflect an "unduly restrictive view of salvation," the document says. The thought that stillborn babies, for example, would be relegated to a kind of no-man's-land in the afterlife tormented generations of Catholic families. The idea of limbo - from the Latin for "edge" - was meant to address the paradox that unbaptised babies could not go to heaven because their original sin had not been expunged, but nor should they go to purgatory or hell. In 1984, when Benedict headed the Vatican's doctrinal enforcement body as Cardinal Joseph Ratzinger, he said he was "personally" in favour of scrapping the 13th-century notion, which he termed a mere "hypothesis". He has approved the document drafted by the International Theological Commission, the panel's secretary told reporters, adding however that its conclusions were not to be considered Roman Catholic Church dogma.”

WHAT'S A MONDAY WITHOUT A FEW PILLS? 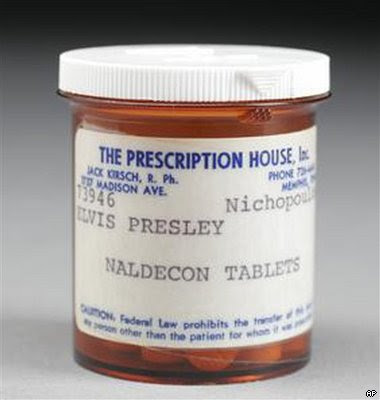 This picture provided by Julien's Auctions shows a prescription drug bottle once owned by Elvis Presley, and prescribed by the infamous Dr. Nick. The bottle, sold empty, was among 15 objects connected to Presley that were part of Julien's Auctions Entertainment Sale in Beverly Hills last Saturday. Naldecon is kind of a bore, however, a simple anti-congestant. We have yet to learn from our man-on-the-spot HCB how much it fetched at auction.

BUT THIS IS MONDAY SERIOUS 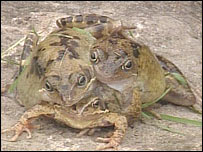 While we continue to worry about the vanishing bees, let’s not forget the deformed frogs. This picture and story are from the BBC. (Thanks Valerie)

"The creature - which has six legs - has stunned a BBC wildlife expert who said it could be an early warning of environmental problems. Laura Pepper, from the Green Umbrella nursery in Weston-super-Mare, said: "We thought it was three frogs huddled together at first. "It is very strange. The children couldn't believe it." Mike Dilger, from the BBC Natural History Unit, said: "I have never seen anything like this. "Frogs are primitive animals - so the occasional extra toe is not that unusual. But this is very unusual." All the creature's eyes and legs appear to function normally, but it is not known whether it eats using all three of its mouths. The amphibian was kept in a container for several hours but hopped away later while nursery staff were showing it to curious parents."

Meanwhile, back in the USA, frog deformity is at epidemic proportions, and, in the Clinton era, research was linking it with industrial pollution. But then Bush arrived and the whole deal, like anything else that might be good for the planet, but bad for business, was instantly defunded to provide tax-cuts for Donald Trump, Bill Gates, and Paris Hilton. States still struggle on but it’s a story largely ignored by the media except as a three-legged geek bite. As the Minnesota Pollution Control Agency neatly summed it up…

"Deformed frogs have been found in Minnesota and in other parts of the country. They were being studied by the Minnesota Pollution Control Agency and other government agencies to determine the cause of the deformities. However, as of July 1, 2001, funding for the MPCA to work with deformed frogs was discontinued. Some federal agencies are continuing to work on the problem." For more.
Posted by Mick at 6/18/2007 01:22:00 AM 1 comment: 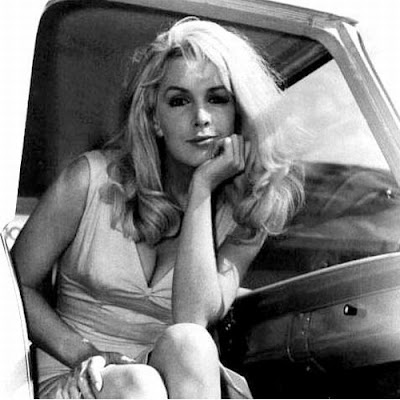 For months, I have been waiting for a reason to publish this breathtaking photograph of the greatly underrated Stella Stevens, but, finally, I’m posting it for no other reason that its Sunday morning, the cat sleeps, and it pleases me. Dawn will come soon enough and the squirrels will play in jacaranda trees before the late-rising crows arrive like the avian Gestapo. I also have a clip of one of my favorite tunes for this occasion. Lou has ensured the song has a totally different melancholy whether or not you are alone. Does Sunday mean toast and newspapers or merely an unmade void? (But surely Stella Stevens could ward off any too-early contemplation of blue Monday.)

The secret word is Bagel

ART, COMMERCE, AND THE LAST WORD 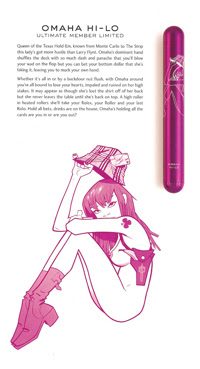 The great and revered Jamie Hewlett, who drew Tank Girl, in its prime, is now designing the packaging for an apparently very successful line of vibrators and adult toys.

MEANWHILE HCB may well have given us our last word on The Sopranos.
"Read this on a blog. I think it's my favorite…
Everything went black for the VIEWERS, not for Tony, AJ, Carmela or anyone else in the diner. WE, the audience were the ones who were whacked."
I have to take this to mean that Big Tony’s world abides but we are all in some television afterlife, but the we don’t know. I find this as plausible as the universe being balanced of the back of a giant turtle, or created by some bad-tempered, bearded, goat-herders' god six thousand years ago.
Posted by Mick at 6/17/2007 01:34:00 AM 1 comment:
Newer Posts Older Posts Home
Subscribe to: Posts (Atom)