IT’S SATURDAY NIGHT AND I GOT A GIG, BUT… 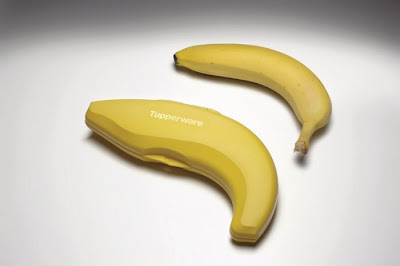 …I had to mention how the banana came with a carrying case (courtesy of Valerie)…
And talking of bananas, click here to check out this wonderment. But if you value your sanity, don’t reflect on how 14 million people have already watched it.
Posted by Mick at 8/01/2009 06:35:00 PM 1 comment:

AND TALKING OF FOOD… 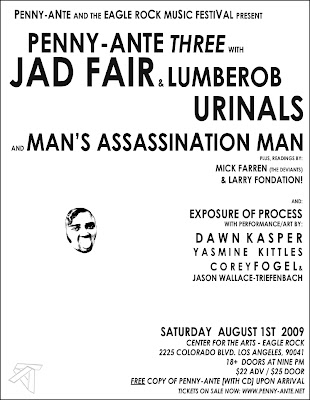 Tomorrow (Saturday) I will doing a live reading at the book/mag launch of Penny-Ante 3. Click here for a wealth more detail. 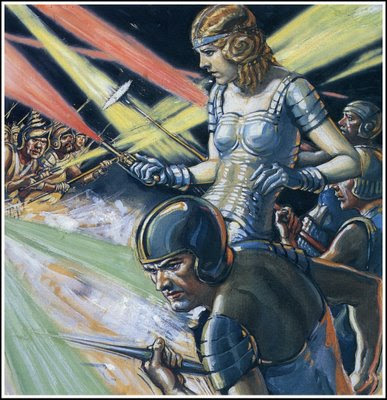 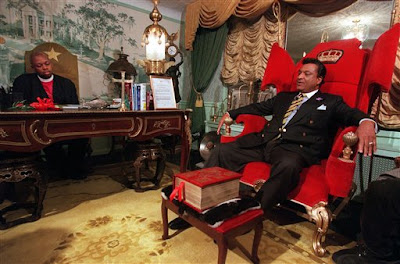 I was always a big fan of the Rev. Ike, and when I lived in Manhattan I was on his mailing list. He seemed to think I was an old black lady. I never knew his full name was Frederick J. Eikerenkoetter II, but his mohair suits were always so sharp and his consecration of material acquisition was so totally outrageous, but, at the same time, so bizarrely logical. His pulpit shtick was also so delightfully innocent when compared with the Christo-fascist, advanced capitalist totalitarianism that lurks beneath the agendas of Sarah Palin and the nasty little Hitler-loving rich-boy Republicans who have formed the quasi-religious power cult know as The Family on Washington’s C Street. (But more of them in the days to come.)
In the meantime, check out The New York Times surprisingly long obituary on Ike. (Sent by Elizabeth.)

“The Rev. Frederick J. Eikerenkoetter II, the flamboyant minister better known as the Reverend Ike, who preached the blessings of material prosperity to a large congregation in New York and to television and radio audiences nationwide, died Tuesday in Los Angeles, where he had lived since 2007. He was 74. His death was confirmed Wednesday by E. Bernard Jordan, a family spokesman. Reverend Ike had suffered a stroke in 2007 and never fully recovered, Mr. Jordan said.
“Close your eyes and see green,” Reverend Ike would tell his 5,000 parishioners from a red-carpeted stage at the former Loew’s film palace on 175th Street in Washington Heights, the headquarters of his United Church Science of Living Institute. “Money up to your armpits, a roomful of money and there you are, just tossing around in it like a swimming pool.” His exhortation, as quoted by The New York Times in 1972, was a vivid sampling of Reverend Ike’s philosophy, which he variously called “Prosperity Now,” “positive self-image psychology” or just plain “Thinkonomics.”
The philosophy held that St. Paul was wrong; that the root of all evil is not the love of money, but rather the lack of it. It was a message that challenged traditional Christian messages about finding salvation through love and the intercession of the divine. The way to prosper and be well, Reverend Ike preached, was to forget about pie in the sky by and by and to look instead within oneself for divine power.” (Click here for more.)
Posted by Mick at 7/30/2009 01:52:00 AM 1 comment: 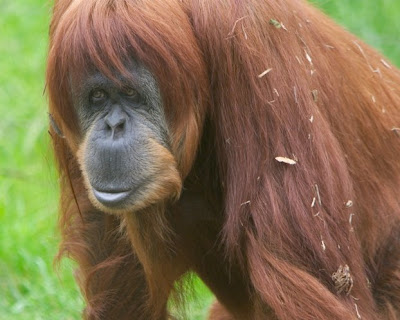 “Hope of Freedom for Orangutans Dashed
248 endangered primates left in cages after mining company pulls out of rescue.

A world-renowned programme to return hundreds of orang-utans threatened with extinction to the wild has been thrown into disarray by the withdrawal of Britain's biggest mining company from Borneo.
Conservationist Lone Dröscher Nielsen interacts with a baby orang-utan (AP)
Dozens of orang-utans that had been due to be released this month have been left locked in cages after BHP-Billiton warned it could no longer guarantee the safety of the animals on forests it had been surveying for coal.
With BHP's support over the past two years, orang-utans from a rehabilitation centre - made famous by the BBC TV series Orang-utan Diary - have been released onto BHP's land in Kalimantan. But last month the world's largest mining company told investors it was withdrawing from the area for "strategic reasons" which it declined to explain.
A planned airlift of 48 adult orang-utans scheduled to take place on 20 July was cancelled a week before it had been due to take place.
Lone Dröscher-Nielsen, the former air stewardess who cares for 650 orang-utans at the Nyaru Menteng Orang-utan Rehabilitation Centre, said BHP had warned that the Indonesian government was likely to hand its coal concessions to other companies who would not match its environmental stewardship of the land.
She added that it now seemed unlikely the Anglo-Australia mining giant would fund a plan to a create a 250,000-hectare wildlife reserve in central Borneo that could have sited 1,000 orang-utans, a genetically viable long-term population.
Some conservationists fear that orang-utans could be wiped out in the wild in little more than a decade due to the destruction of their habitat for logging, mining and palm oil plantations.” (Click here for more.) 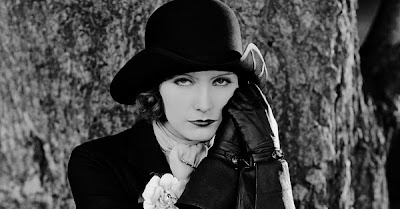 People would constantly tell Crayola Frozdick that she looked like Greta Garbo, but she would never respond to the comparison.
Posted by Mick at 7/30/2009 01:42:00 AM 1 comment: 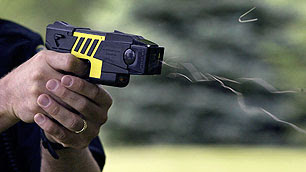 We seem to be in a meme of danger-tech. The following comes from Tim via Facebook, as the whole question of police power is raised in the US.

“Leading stun gun manufacturer Taser International Inc. unveiled on Monday a device that is capable of deploying three shocks without having to be recharged — a move that comes just days after a British Columbia inquiry urged stricter limits on the use of the weapons.
Typically, law enforcement officers using stun guns — also known as conducted energy weapons — have to reload after each deployment. Officers using the weapons no longer have to wait to deploy the weapons again, and now can deliver multiple shocks in quick succession.
This capacity could help officers who have missed a target or have more than one suspect to subdue. Whether or not law enforcement officers should be given the ability to shock people multiple times has been a contentious issue in Canada. One of the recommendations of a report on stun gun use released Thursday by former B.C. Appeal Court justice Thomas Braidwood suggests such use is unwarranted and potentially deadly.” Click here for more
Posted by Mick at 7/29/2009 04:25:00 AM 3 comments:

THE FEAR OF THE MAN-EATING ROBOT 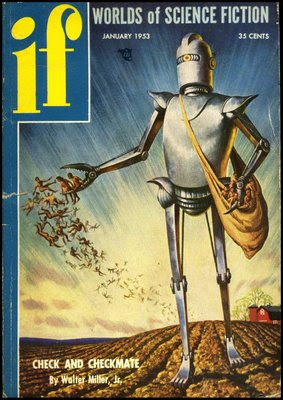 The following comes from our good pal Valerie (who also sent the Superman cover below.)

“When Robotic Technology, Inc., and Cyclone Power Technologies announced earlier this month they had completed the first phase of their project to build a robotic vehicle that could scavenge sticks, grass, leaves and other biomass to fuel itself, the companies had no idea that their proposed machine would set off one of humanity's worst fears: the dawn of an artificially intelligent race of self-sufficient mechanical devices with a hunger for organic meals (including people). The companies quelled last week's clamor that their Energetically Autonomous Tactical Robot (EATR) was being developed as a carnivore by pointing out that it will, in fact, be a vegetarian.” (Click here for more) 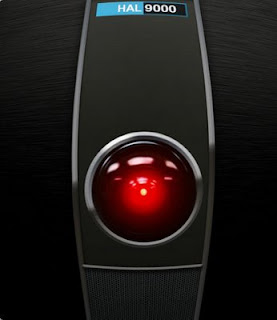 SUPERMAN’S ANTICS COULD BE A LITTLE STRANGE 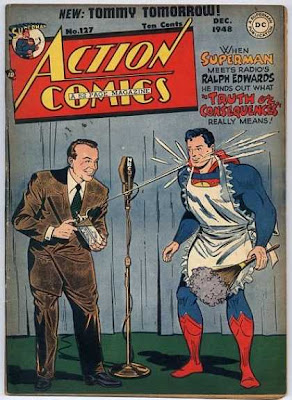 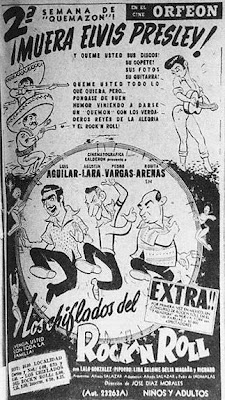 The following was sent by HCB, reminding us in the process that Elvis Death Day is a little over two weeks away.

"May 1959: While Elvis Presley’s popularity in the U.S. was arguably at its all-time peak, Mexico was in the midst of a huge anti-Elvis backlash. Tijuana tabloids called him a racist and homosexual, after the singer reportedly told gossip columnist Federico de León "I'd rather kiss three black girls than a Mexican." A Mexican woman in the same column was quoted saying "I'd rather kiss three dogs than one Elvis Presley.” Mexican Radio Exitos read de León's column over the air and spearheaded a boycott of the "insolent artist," while the powerful student group Federación Estudiantil Universitaria (FEU) held public record burnings. When Elvis’ movie King Creole screened in May 1959 at the Américas Cinema in Mexico City, newspapers who’d advertised the film under the title Melodía Siniestra (Sinister Melody) reported a “riot” occurring. Mexican counterculture novelist Parménides García Saldaña wrote a short story, "El rey criollo," about the screening where several hundred gatecrashers reportedly shredded the seats and threw lit papers onto patrons from the balcony. “Before the film began,” wrote Saldaña, “it was pure chaos, a f-ing riot as they say more vulgarly. The different gangs shouted ‘Here the Guerrero [neighborhood],’ ‘Here the Roma’ ...And then some chicks come in with leather jackets with swastikas painted on them, pony tails and bobby socks, real rock and roller like…a group of guys gang up around them [and shout] “Dance!’ Mexican reporters suggested Elvis’ hip-wiggling and mannerisms proved he was either maricón (homosexual) or actually a woman in reverse-drag." (Click here for more.) 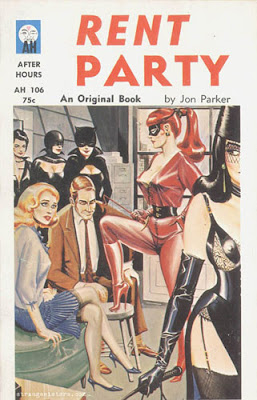 A modest suggestion in these economic hard times. 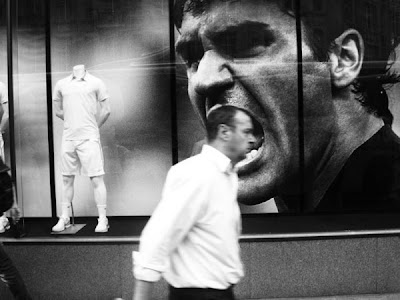 Doc40 is having having technical problems due to corporate failure. Normal service will be resumed in 12 to 24 hours.
Posted by Mick at 7/27/2009 03:48:00 AM 1 comment:
Newer Posts Older Posts Home
Subscribe to: Posts (Atom)