Valerie reminds us the Leonid meteor shower hits tonight. (And who knows, we may all go blind and the triffids will eat us.) Sadly they are really only visible outside the big city bright lights and the exhaust of a million gas burners, which rather counts me out. (Click here for the sensible details.)

The secret word is Burnout

A COMET BIGGER THAN THE SUN 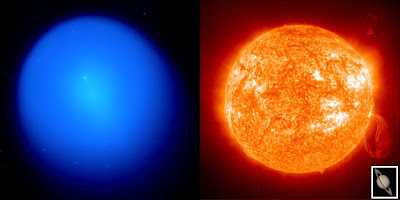 I was grounded in too much science fiction as a lad to seriously believe in signs in the sky or astronomical portents, (black dogs are more my speed) but when a comet named Holmes (maybe after Sherlock or perhaps Celeste?) blows up to something larger than the sun, and, instead of quietly hanging round in the Kuiper Belt, becomes, if only briefly, the biggest thing in the solar system, one can but wonder – especially as we coast towards the future mythology of 2012. (The insert of Saturn in the pic gives an idea of scale.) The comet did whoever do something similar in 1892, and we are still around so maybe we shouldn't worry. Here’s one report of the event from Reuters, and another from the University of Hawaii Institute for Astronomy, both sent by our friend peromyscus.

And this is Interstellar Overdrive with Syd.

In today’s LA CityBeat, I expressed some of my doubts about the writer’s strike…

“While I won’t lower the red flag or hang-up my IWW T-shirt, I confess to mixed emotions about the strike by the Writers Guild of America. The problem might just be timing: Can the writers in TV and movies afford a walk-out over back-end money when a rapidly fragmenting mass culture is nose-diving into a bottomless abyss of Saw movies and American Idol? Or maybe it’s just old fashioned jealousy. When they’re working, writers for both TV and film are paid vastly more that novelists, poets, or journalists for work that is often so substandard it could cause an old time pulp hack to weep into his Smith Corona.” (Click for the rest)

But my mixed feelings have turned into a kind labor relations scrapbook. I mean, I wholly agree with this comment on Huffpo. Except just being a bloody writer doesn’t make you one of the good guys. (Hitler, Coulter, Hobbes)

“If the creative people of america won over the monstrously imperious corporations it would create an extra hour of daylight in this country (to paraphrase Spike Milligan, writing and performing genius) Keep them coming. Other Americans will get that this is bigger than the perceived bunch of lucky white guys making silly amounts of money. If the corporations, already in tune with the Neo-Con agenda, could eliminate writers, they could control content. Support your writers America.”

And who could argue with Howard Zinn and Woody Guthrie? On the other hand, I am not overly impressed by the street theatre of writers from The Daily Show. But sympathy then does an abrupt 180 while watching the media mogul fatcats smugly justifying their hideous greed. And after all this indecision I can only leave it to Billy Bragg.

Except I have another separate piece in CityBeat today on my own writing and why I do it. And, believe me, it ain’t for the digital backmoney.

AND ALL OF YOU IN LA, DON’T FORGET I’M PLAYING OUT TONIGHT WITH ANDY AND TOM, SCROLL BACK TO TUESDAY FOR DETAILS. 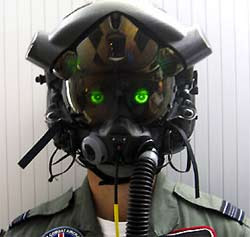 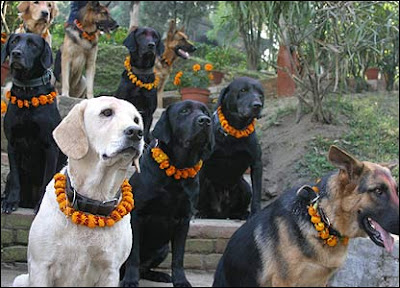 This may strike newer readers as odd but it has a provenance.

I wrote the paragraph below when I was quite paranormally spooked on New Year’s Day, 2005, but I guess, since I’m still around, the dog clearly meant me no harm and now I further learn that according to the Hindu scripture, the Mahabharat, dogs accompanied Dharmaraj Yudhisthir on his journey to heaven. There is also a Hindu belief that dogs guard the underworld.

"Just over two hours ago it was 2004. At 11.58, I stepped out onto the balcony to listen the calendar change, noble in my new Yukata. The concrete was cold under my feet. Car horns were hooting, fireworks and perhaps guns were going off, echoing in the Hollywood Hills, and then, as precisely as I could judge, right on midnight, a silent dark dog – or maybe a coyote – raced up the street, running flat-out desperate, breakneck, and headlong north, into the darkness between streetlights. The omen potential was so overwhelming that it left me a little stunned. As far as I could tell, I was the only one who had seen it, and I hardly cared to make an analysis. The black dog looms large in my native folklore, and, for the most part, it isn’t at all good. But was this black dog – so real that I considered I was hallucinating – crossing my path or running on past me?"

The secret word is Possible

And this, more traditionally, is Robert Johnson – Hell Hound On My Trail 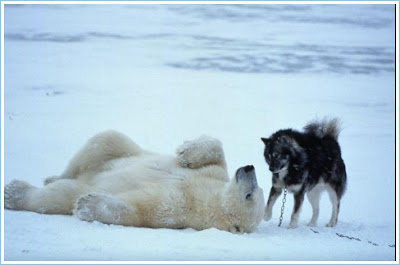 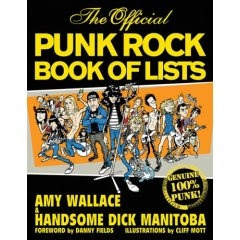 As part of the celebrations for Amy Wallace and Handsome Dick Manitoba’s The Official Punk Book of Lists, Mick Farren and Andy Colquhoun, with help of Tom Gardner, will be playing some bizarre cosmic blues this coming Thursday (November 15th) at Skylight Books, 1818 N. Vermont (90027) – 323 660 1175. it all starts at 7.30.

THE INVASION OF THE RHIZOMORPHS 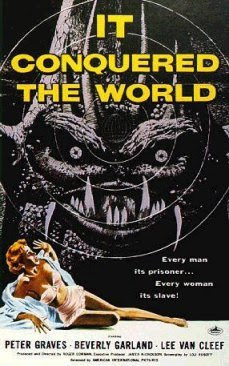 Today, I took Veterans Day off (see Sunday 11/4) and spent it in bed. Even now I’ve risen I find myself falling asleep in front of a TV that is showing nothing of any substance except reruns of The X-Files. I believe this is one of those days when I have to admit I have been doing far too much and no longer have the stamina of Capt Marvel Jr. (or have forgotten the magic word.) Thus, feeling a lot like a lethargically insane fungus, I happened by synchronicity (thank you Dr. Jung) to come across another account of this famous entity and the invasion beneath our feet.

“The underground fungus [is] estimated to be between 2000 and 8500 years old . . . . [It] spreads mainly along tree roots, but also through the soil using shoestring-like structures called rhizomorphs . . . . Researchers thought that individual fungus organisms grew in distinct clusters in the forest, marked by the ring-shaped patches of dead trees that they spotted during overhead flights. No one expected to find that the well-separated clusters represented one contiguous organism." (For more)

And this is Captain Beefheart playing Big Eyed Beans From Venus

The secret word is Room

And I also forgot to post links to two pieces in last Thursdays LA CityBeat. One short take on the WGA strike, and another a rare (for me) piece of rock crit.

UP AGAINST THE WALL MOTHERFUCKER REVISITED

Is there such a thing as political nostalgia? Looking back over the century so far, I wonder about how much we have been forced to hold the line against the war, stupidity, and simplistic evil of the Bush/Cheney regime and the moronic culture and thought patterns it has engendered and nurtured in its fetid hothouse of torture and greed. Few speak any longer of utopian ideals and the revolutionary movement that might need to be created to achieve them. And then I happened across this comment on HuffPo and it started me thinking.

"Frank Little, member of the Executive Council of the IWW (formed 12 years before the Russian revolution) was lynched by Pinkertons both for union organizing and his stance against worker participation in WWI. I suggested the anti-war strike in memory of Mr. Little and I'm neither a democrat nor a red, as if I needed to apologize for either. This country needs a general strike because the class running the show presently is driving all of us to ruin. Fact is, the sub-prime scandal (according to Paul Volcker) has resulted in the biggest crisis for capitalism in the history of this country. We have a war-drunk and corrupt administration which, in concert with an under-regulated, over-leveraged and senile finance capitalism, is quickly driving this country headlong into bankruptcy."

And then, by what can only be total synchronicity I came across this article from the New Statesman about revolutionary youth movements in Eastern Europe. But why not in the West? I mean, goddamn it, we have so much more communication technology than we he had 30-40 years ago. The idea of creating instant flash mobs, for instance, has only been used for undergraduate pranks, and never employed by (say) the anti-war movement. Like good little lemmings we have been working within the system, and, I for one feel that my old time principles have have been compromised and betrayed in the process. Okay so we work for a Democratic win in 2008, but that doesn’t mean we don’t need to start now to create mechanisms with which to hold Hillary’s (or whomever’s) feet frirmly to the fire of actual change.

This is the Jefferson Airplane and I will shoot the first one who sniggers. Because here’s a snatch of lyric.

We are all outlaws in the eyes of America
In order to survive we steal, cheat, lie, forge, fuck, hide. and deal
We are obscene, lawless, hideous, dangerous, dirty, violent, and young*
But we should be together
Come on all you people standing around
Our life’s too fine to let it die and
We can be together
All your private property is
Target for your enemy
And your enemy is
We
We are forces of chaos and anarchy
Everything they say we are we are
And we are very
Proud of ourselves
Up against the wall
Up against the wall motherfucker
Tear down the walls

* Or am I just getting old? 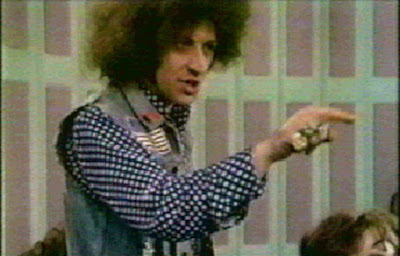 Your humble host on TV during the previous revolution.

"The HAL 9000 series is the most reliable computer ever made. No 9000 computer has ever made a mistake or distorted information. We are all, by any practical definition of the words, foolproof and incapable of error."
Posted by Mick at 11/11/2007 01:52:00 AM 2 comments:
Newer Posts Older Posts Home
Subscribe to: Posts (Atom)