CHECK OUT THIS LITTLE HORROR

From MrMR. (and do let it run its full course.)

Oddly, it could be a promo for my new book Who's Watching You, but actually it isn't. (See last Saturday.)

THOSE DALEKS ARE IRRESISTABLE 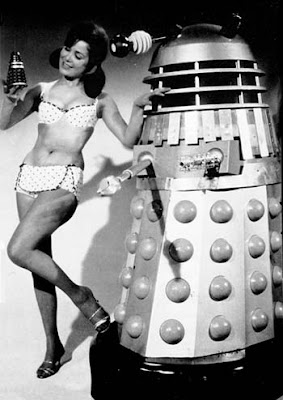 While attempting to duck under the porn/cheesecake issue, it would seem that, in real life, human/robot love is on the rise (so to speak.) Valerie points out a fascinating tale recounted by Clive Thompson on Collision Detection (read the whole thing.)

At the Yuma Test Grounds in Arizona, the autonomous robot, 5 feet long and modeled on a stick-insect, strutted out for a live-fire test and worked beautifully, he says. Every time it found a mine, blew it up and lost a limb, it picked itself up and readjusted to move forward on its remaining legs, continuing to clear a path through the minefield. Finally it was down to one leg. Still, it pulled itself forward. Tilden was ecstatic. The machine was working splendidly. The human in command of the exercise, however -- an Army colonel -- blew a fuse. The colonel ordered the test stopped. “Why?” asked Tilden. “What's wrong?” The colonel just could not stand the pathos of watching the burned, scarred and crippled machine drag itself forward on its last leg. “This test,” he charged, “was inhumane.”

The secret word is Anthropomorphic

A VERY IMPORTANT MESSAGE FROM NEWTON THE CAT

This is so simple a dog can do it. The Animal Rescue Site needs lots more people to click on it daily to meet their quota of the free food donated to abused and neglected animals. The way it works is that their corporate sponsors/advertisers donate food in exchange for advertising, but these donations are calculated by the number of hits on the site. Thus use the link above to go to the site, click on the purple box "fund food for animals". It doesn't cost you a thing and takes about a minute. It would probably take another minute to email the link to everyone you know. Do it now, humans.
The secret word is Purr
Posted by Mick at 5/11/2007 12:33:00 AM 1 comment:

AUGURIES OF DOOM HEAT UP 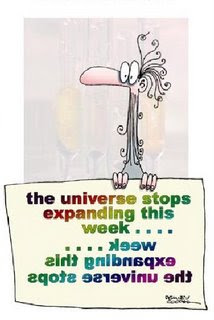 As I both hoped and expected 12.21.12 seems to be taking hold on the peripheries of the collective dementia. A character with unlikely name of Mhynek delivers a load of foreboding.
"The complete loss of the honeybee will felt over the next 4 years. The sunspots are just starting. They will peak in 2011. Many things will change in the next four years. Expect a shortage of food, much death, followed by new dawn of enlightenment. This is how the 4th epoch of man ends and the 5th epoch of man begins after 13.0.0.0.0, you know this date as Dec 21st, 2012. The Mayans prophesied *that from 1999 we have 13 years to realize the changes in our conscious attitude to stray from the path of self-destruction and instead move onto a path that opens our consciousness to integrate us with all that exists. The Mayans knew that our Sun, or Kinich-Ahau, every so often synchronized with the enormous central galaxy. And from this central galaxy received a 'spark' of light, which causes the Sun to shine more intensely producing what our scientists call 'solar flares' as well as changes in the Sun's magnetic field. The Mayans say that this happens every 5,125 years. But also that this causes a displacement in the Earth’s rotation, and because of this movement great catastrophes would be produced."
Meanwhile the cash registers are ringing, right along with the death knell. Amazon.com shows more than 100 books on the subject, with titles like Doomsday 2012 and 2012: You Have a Choice! Spirituality conferences are already convening like "2012 Ascension Symposium," which promised, "Offer humanity global reassurance and change the Consciousness of the world." This would all seem to be shaping up to be much more fun than Y2K.
*Oh yeah, and you can watch an animated countdown of how long we have left!
CRYPTIQUE – Will the last one alive turn the lights out?
Posted by Mick at 5/10/2007 12:28:00 AM 7 comments:

A VERY BAD IDEA OF YESTERYEAR 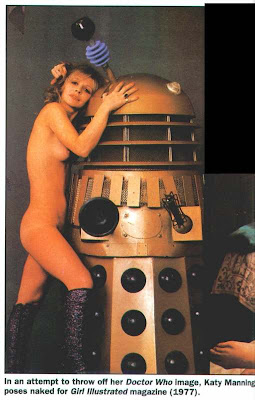 And, alas, as history has proved, Katy Manning's naked embrace of a Dalek did not make her a household name or even a global object of desire lusted after by millions.

The secret word is Davros

But if all of this is a little retro-sexist tacky or whatever, we recommend the fabulous...
Elephantcam

OR MAYBE EXTINCTION'S CLOSER THAN WE THINK 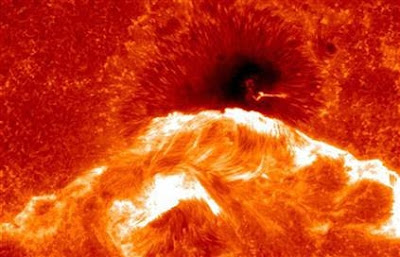 Astronomers have spotted a cataclysmic explosion that marked the death of a huge, distant star in a blast five times as bright and powerful as any they had seen previously. They said yesterday that a similar fate may be imminent for a star in Earth's galactic neighborhood. The size and energy of the newly recorded blast, 240 million light-years away, have already begun to transform scientific understanding of how especially large stars explode, and have left awestruck researchers concerned -- and a little excited -- about what might happen to the similarly enormous and unstable star closer to home.

The secret word is Boom!

CRYPTIQUE – It’s hard to make the transition from the unthinkable to the unspeakable.

SOME AFTERNOONS I THINK THIS SPECIES SHOULD BE EXTINCT

The way in which the story – and much more important, the hideous live cell phone footage -- of the death of 17-year-old Du’a Khalil Aswad has been orbiting the periphery of the mainstream media for days now greatly disturbs me. The teenager was stoned and kicked to death by a crowd of close to a thousand men because her family were from a minority Kurdish religious group called the Yezidi, and she was seeing a Sunni Muslim boy. Local security forces seemingly looked on, and the so-called "honour killing" was recorded by dozens of cell phones – modern technology for the 10th century – and are now circulating the internet like fucking snuff movies for the amusement of the mentally hideous. The dilemma is what does one do? Anyone with half a brain and an internet connection can find the footage in approximately 18 seconds. Maybe I should just keep quiet, but the images are in my mind and will not go away, and maybe silence really does equal death. I guess that’s one of the reasons I’m a fucking writer. So I can chronicle the multitude of ways men can find to shame and disgust me.
Posted by Mick at 5/08/2007 03:45:00 PM 6 comments:

IS THIS REALLY KANSAS, TOTO? 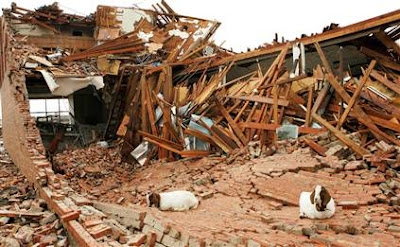 As we should probably have expected, the post-tornado devastation in Greensburg, Kansas has been massively exacerbated by half the Kansas National Guard being in Iraq and, as a result, ability to shift emergency equipment has been severely handicapped. Kansas (Dem) Gov. Kathleen Sebelius said the government’s response to the disaster was undermined by ongoing National Guard deployments to the Middle East. “I don’t think there is any question if you are missing trucks, Humvees and helicopters that the response is going to be slower, and the real victims here will be the residents of Greensburg.” Also having the totally unbelievable Sam Brownback as one of its Senators may also hamper Kansas more than a little. Brownback, who has spent all his time in the Senate fighting evolution, gay marriage, and broadcast indecency, is now running for the Republican nomination, as the GOP “Rapture” candidate.

MEANWHILE MISS TEMPLETON IS NOT AMUSED
"Mondays are bad enough as is, what with the going back to work and all, but when one comes home to a story on the evening news where one's president (strategically shaved chimp though he may be; we are still a republic when last checked, E Pluribus, Divided we Stand, No Money Down, etc. etc.) is freakin' COMING ON to the Queen of England in some mixture of Dallas used-car salesman sincerity crossed with ankle-bracelet wearing "bringing sexy back" predator charm, then one knows that the seventh seal is not only broken; it's long past its warranty. Cue the locusts."

DENIZENS OF THE DEEP 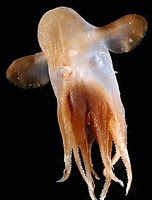 Doc40 has published its share of bikini babes struggling with octopi, but, for a change, here is the real thing. (Octopi, not bikini babes.) From Collision Detection come the most amazing pictures of exotic deep-sea life, which have to be worth the time and effort. And also fab film of an octopus opening a bottle from Peromyscus.

The secret word is Fathom 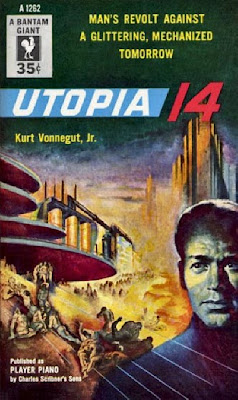 I couldn’t help it, when this piece came in from Subversive Ilene, I was going to cut out some parts to make it an easy-read length, but then I caught myself. I was going to start cutting up Kurt Vonnegut? Not a chance, Lance. So I just posted the whole damn thing as it was delivered. 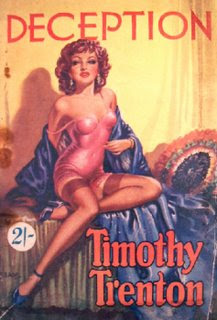 You gotta read this one and also watch the video. Candy flavored crystal meth? Do I ask myself what they’ll think of next? I can think of little else to add except that I really had better get my definitive book on amphetamines written while the rapidly diminishing literate public still has enough brain cells to read it. Beyond that, I can only accept the concept as further confirmation that the world is very definitely going to hell, quite as predicted, in whatever metaphoric receptacle you care to select.

The secrets words are Bleeding Man

CRYPTIQUE – Maybe, sometimes, you just might find you can actually get what you want.