I have never been terribly adept at the kind of self-promotion that sends millions of people out to purchase millions of units of one’s product and makes one rich, famous, beloved by all in the process. On the other hand, not to repeat the modest suggestion that a few more of you might just like to order a copy or two of Zones Of Chaos – my brand-new collection of my poetry and short prose – would be self effacing to the point of absurdity. So, for those of you who haven’t done so already, here’s the basic how-to-get-it information…"Available now: ZONES OF CHAOS, a maelstrom of poetry, prose, essays, lyrics, commentary and fiction from the legendary Mick Farren, featuring an introduction by Michael Moorcock! The book is $14.95, with free shipping in the US (and reduced cost shipping to the UK at $4 per copy). Contact Borderlands Books, toll-free 888 893-4008, or via email at orders@borderlands-books.com . When you order, they'll just need to know the address you'd like the book sent to, the number of copies you'd like, and how you would like to pay for your order. For payment, you can call, fax, or email your Visa or Mastercard information (card number, expiration date and three-digit security code to orders@borderlands-books.com ), or you can send a check or money order made out to Borderlands Books to the address below. Don't miss this mind-blowing collection, which includes a previously unpublished Victor Renquist story. Order now and you'll receive your copy signed by the Dark Prince of Pop Fiction (that's Mick) himself. (For wholesale enquiries or other questions, email office@borderlands-books.com.)"

“I MIGHT ORDER YOUR BOOK BUT I THINK YOUR STUPID BAND IS LOUD AND UNCOUTH.” 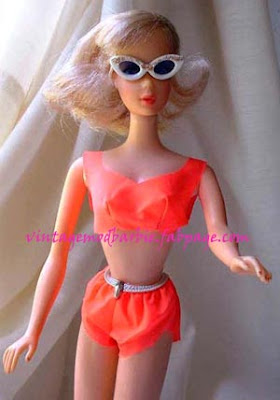 I would, however, point out to Bikini Barbie that, strictly speaking, it wasn’t actually my stupid band, but an ad hoc assemblage of well-respected, veteran psychedelic pickers hell-bent on blowing the roof off an innocent English Saturday night club, and the clip I posted earlier in the week was the last no-prisoners finale, and I’m hoping that others might have created audio or video records of some of the other tunes that were played earlier in the night – maybe “Half Price Drinks” or “When The World Was Young” – when matters we minimally more modulated. Any offers?
Posted by Mick at 10/17/2009 06:51:00 PM 3 comments: 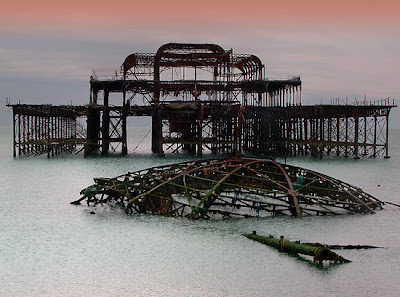 These are the somewhat steampunk ruins of the old West Pier in the town of Brighton where I was recently disporting myself as the alleged Mad Poet of Rock & Roll. The construct of twisted iron stands a few hundred feet out in the deep water of the English Channel, surviving on the promise that, on some unspecified day, it will be rebuilt and restored to it former glory.
Built back in 1866 by marine engineer Eugenius Birch, the West Pier was always secondary – at least in my day, when the Mods and Rockers flourished – to the more easterly Palace Pier, that had much more to offered in the way of fun, frolic, slot machines, alcohol, bumper cars, and girls who shrieked and giggled as the sea-breeze lifted their skirts.
The West Pier also was dogged by far more than it’s share of misfortune. As Wikipedia tells it…
“The West Pier had been cut off from the shore (partly deliberately, for safety reasons) since 1975, but the West Pier trust offered regular tours of it until the structure suffered a serious partial collapse during a storm on December 29, 2002, when a walkway connecting the concert hall and pavilion fell into the sea. On January 20, 2003 a further collapse saw the destruction of the concert hall in the middle of the pier. On 28 March, 2003 the pavilion at the end of the pier caught fire. Firefighters were unable to save the building from destruction because the collapsed walkway prevented them from reaching it. The cause of the fire remains unknown. On May 11, 2003, another fire broke out, consuming most of what was left of the concert hall. The Fire re-ignited on May 12. Arson was suspected: the West Pier Trust refers to the fires as the work of "professional arsonists". On June 23, 2004 high winds caused the middle of the pier to collapse completely.”
I would not only regularly see the old West Pier as I recently roved around the town, but a painting of its black iron at sunset dominated one wall of my hotel room at the cutely named Motel-Schmotel, and I started to wonder – especially amid the mixed emotions of leaving – whether I was indentifying with the ruin a little too intimately. If I really did venture a return to the haunts of my youth, and go back where I was so recently welcomed, will I really be able to cut as some ancient but surviving force with whom to be reckoned still, or would I be nothing more a short-lived relic, briefly lauded but then forgotten? I know, as I write, I am definitely suffering from that post-adventure, let-down, sadness, and am also understandably tired, and I don’t doubt that I will cowboy up soon enough and all will be well. But what would be the point of this forum if I didn’t, now and then, voice a fear of misgiving?

A WORD FROM OUR SPONSOR 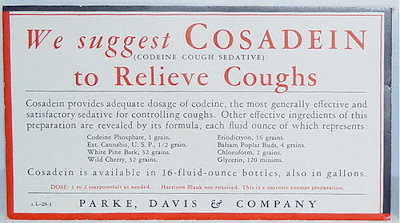 THE FAR SIDE OF DULCET 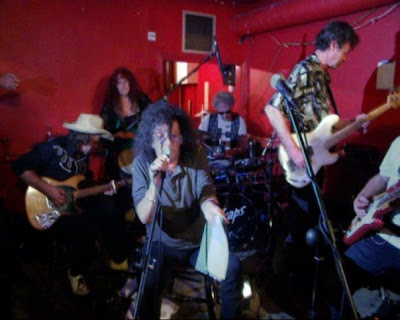 Well neighbors, I have finally landed in LA and my arms actually are tired, so I will probably be writing more later, but, in the meantime click here for the very first very ragged and very cacophonous video of our recent UK musical reunion, courtesy of our pal Rich on Facebook. Shown here are Russell Hunter on drums, Duncan Sanderson on bass, Slim Tim Slide on guitar, Judge Trev on guitar, Gregg McKella on clarinet and effects, Jaki Windmill on percussion and Honkin' Stu on blues harp. The ensemble is performing Song of the Hired Guns – the grand, nine-minute, everyone-thrash-away-while-I-rant-poetry finale -- and I rather regret the sound being considerably less dulcet that beating on a bucket, although I rather recall it being slightly more organised on the night. I hope other versions surface and maybe bear this out. If it helps any, here are the lyrics to the piece. (Which are also featured in my new collection of writings – Zones Of Chaos. (Scroll back to September 14th for deatails.)

WE HAVE TAKEN IT TO THE EDGE OF GRAVITY'S DEFILE
WE HAVE SHOT OUT RAINBOWS WITH OUR CANNON
WE HAVE WALKED WITH SPURS AND HARD NAILS
OVER THE CURVATURE OF PLANETS
AND MADE OUR MARK ON IRON MOUNTAINS
SO TELL US QUICKLY GREAT HERO
AND MAN WITH NO NAME
WHAT THE FUCK ARE WE SUPPOSED TO DO NOW?

WE HAVE MATCHED POCHEEN
AND DOUBLE SHOTS OF RAILROAD GIN
WITH NAZGUL OF THE NINTH INTERNATIONAL
AND TAKEN ABUSE
TO THE UPPER ECHELONS OF NAKED ART
WE HAVE BEEN AND SEEN
AND SPURNED THE DESIGN
ABANDONED THE PLAN
AND REJECTED THE PLEA BARGAIN
SO DO NOT LEAVE US HANGING
HERE IN THE DISCOLORED DARKNESS, DON VITO
FOR ARE WE NOT YOUR CHOSEN MEN?
WHAT THE FUCK ARE WE SUPPOSED TO DO NOW?

FROM SEWER AND CESSPOOL
TRAILER PARK AND HALF CROWN KNOCKING SHOP
FERAL AND FASTIDIOUS
WITH ONLY A BOTTLE OF PILLS BETWEEN US
SHARP SWORDS AND A FISTFUL OF DYNAMITE
SONGS OF VICTORY AND EXECUTION
WE HAVE DONE THE BIDDING OF ALL
AND THE WILL OF NONE
WE HAVE SACKED AND PILLAGED
IN THE CITIES OF THE RAVAGED NIGHT
BUT NEVER EXCEPT IDLY AND TEMPORARILY PROFITED
AND IT'S THE TIME TO CLUE US IN
DIVINE MARQUIS
FOR WE NEED TO KNOW
WHAT THE FUCK ARE WE SUPPOSED TO DO NOW?

WHAT THE FUCK ARE WE SUPPOSED TO DO NOW?