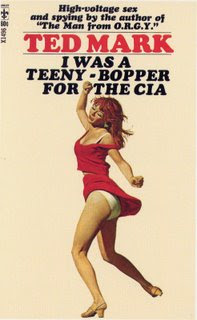 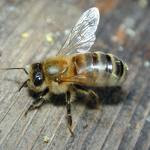 I’ll never understand the mindset of the rightwing asshole. Everything is always just hunky dory. We’re winning the war in Iraq, Al Gore invented global warming, and the bees aren’t vanishing. There’s even a whole deal being made as to whether Albert Einstein actually said the words that have been attributed to him and repeated all over in the last couple of weeks. "If the bee disappeared off the surface of the globe then man would only have four years of life left. No more bees, no more pollination, no more plants, no more animals, no more man." I didn’t use the Einstein quote in all that I’ve recently written about bees recently, (see last Thursday) because I wasn’t sure how much the great mathematician knew about bee-keeping. And this now seems to be the big debate and totally clouding the seriousness of the bee disaster. What is wrong with these fools? (I also resisted the Einstein quote because it tied in too neatly with the theory of the end of humanity 12.21.12)

Meanwhile, Doug the Bass has sent some interesting economic statistics… Over 80 per cent of Americans are broke at 65 years of age.
CEO's in this country make more than 360 times that of the regular worker in their company?52 per cent of homeless people are Veterans?

The secret word is Ire

"TAKE THIS ROCKET TO NEPTUNE!" 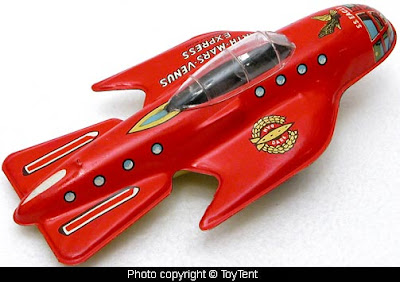 So I’m woken on 4/20 by a cat who wants his breakfast. I crawl out of bed, habitually turn on the TV to MSNBC only to discover that a lone gunman is holding up NASA’s Johnson Space Center. Huh? After blinking for a while, and knowing that I will be accused of cynicism and a lack of the correct piety in the face of TV death, a flight of fancy winged its unbidden way across my consciousness that maybe the guy was planning to hi-jack a spaceship, but had gone to the wrong place.

(And my cynicism might not be so deep-seated if the outpourings of the news media weren’t so pompously inaccurate. No one, from Fox News to The Huffington Post seems to know the difference between a serial killer and a mass murderer, and that the psychoses involved are vastly different.) 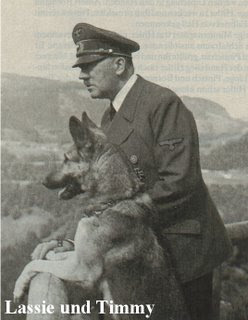 The 1889 birthday of Adolf Hitler, a murdering bastard of epic proportions who probably burns in Hell if there is one.

Also the anniversary of the 1999 shooting rampage by Eric Harris and Dylan Klebold at Columbine High School in the Denver suburb of Littleton which has obviously just been subject once again to the media spotlight.

GOOD FOR YOU, GOOD FOR ME 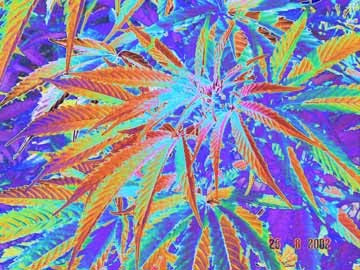 Valerie has sent this link to The New Scientist that provides further evidence marijuana is in fact a cancer retardant. The drug enforcement industry – like the oil industry with global warming – mutters crap about not enough research and the jury still being out and therefore the dope should remain illegal, blah, blah, blah, but their position becomes less and less tenable except, of course, they have heavily armed police, a vast penal system, and a massive Federal Gestapo to reinforce their opinion.

Today’s LA CityBeat has an environmental theme, which gave me a chance to put together all the information I’ve been gathering on disappearing bees over the last month or so. I also bid a less than fond farewell to the old fool Dom Imus.
Posted by Mick at 4/19/2007 01:09:00 PM 1 comment:

ROUND UP THE DEPRESSED, THEY'RE DANGEROUS 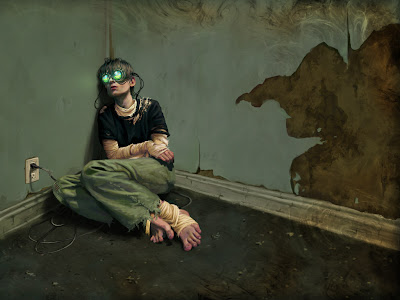 I’ve already been accused of an unfeeling cynicism because I am not weeping over the deaths of one set of strangers rather than another. I weep for friends and lovers. But now I feel I have to court even more disapprobation by pointing out the very fine line between tragedy and The Death Circus, and I fear we are already walking into the big top. (There’s a pun in there that only Londoners will understand.) The media is now left with nothing to show but candlelight vigils and probing the minutia of the madman. The clowns are being sent in, the nuts and racists are entering the arena, and Newsweek makes sure we know it.

“The bodies had barely been removed when the racial epithets started pouring in. Cho Seung-Hui, the 23-year-old identified as the killer of 32 on the Virginia Tech campus, may have lived in the state since his elementary school days, but to the bigots in the blogosphere it was his origins in Korea that mattered most. "Koreans are the most hotheaded and macho of East Asians," wrote one unnamed commentator on the Sepia Mutiny blog. "They are also sick and tired of losing their Korean girlfriends to white men with an Asian fetish."

Talk radio fascists beat their chests and demand to know why the victims couldn't take down one lone gunman -- and an Asian to boot -- while NBC reacts with sanctimonious delight as it finds itself with Cho’s press kit of Travis Bickel pictures and his multimedia mental meltdown.

“Network officials turned the material over to the FBI and said they would not immediately disclose its contents pending the agency’s review beyond characterizing the material as “disturbing.” It included a written communication, photographs and video."

Voices bleat how can we stop such a terrible event ever happening again? The answer is that we can’t, and secretly don’t want to, or we wouldn’t sell machine guns to the mentally disturbed with such merry abandon. The occasional mass murder is just the price tag on the right to bear arms. And, of course, a symptom the quiet fact that American popular culture just dotes on death.

(And as I write this highly unconfirmed rumors flicker across my computer of two people shot at University of Missouri and a triple homicide and a suicide in NY????)

The secret word is Broken 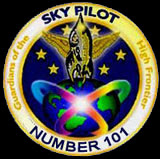 I believe this is what you become after graduating from being a space cadet.

Meanwhile HCB writes…
"This business about Ismail is far more interesting than the fox etc for-hire pundits who are blaming violent movies and video games. Scary though to see a new wave of campus violence related to important literary sources--some bible, some Melville, some Leonard Cohen. In my day our motivational source was more likely to be Bartleby the Scrivener--a classic of passive resistance. I'd be interested to see a panel of lit professors and bible intellectuals tackling this on Charlie Rose. Might like to see Hannity and O'Reilly scratching their heads on this one as well. I think your poem, "Murder Impulse" is worthy of any coffeehouse slam. I predict Ismail Ax will be the name of a band within three months--sorry to be so obvious. I haven't read the guy's plays, but they can be found here"
Posted by Mick at 4/18/2007 03:10:00 AM 1 comment:

The weirdness commences. Seemingly Cho Seung-Hui died with the words "Ismail Ax" in red ink on the inside of one of his arms. The scrabble to find a meaning is now spreading like an internet contagion. The following speculation comes from Prison Planet.

"In Islam, Ibrahim is known as the father of the prophets and, upset that people in his hometown still worshiped idols and not Allah, he smashed all but one statue in a local temple with an ax. Ibrahim's son is Ismail, who also became a prophet. Ibrahim is Arabic for Abraham, who plays a significant role in Christianity, Judaism and Islam. Two theories come from literature, where Ismail is spelled Ishmael. In one, tied to James Fenimore Cooper's novel "The Prairie," Ishmael Bush is known as an outcast and outlawed warrior, according to an essay written in 1969 by William H. Goetzmann, a University of Texas History professor. In Cooper's book, "Bush carries the prime symbol of evil -- the spoiler's axe," the professor wrote. Also, the narrator from Moby Dick, Ishmael, is considered an enigma who is well educated yet considers his time on a whaling ship worthy of time at Yale or Harvard, according to education site Sparknotes.com." 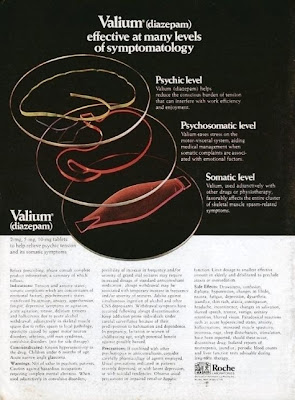 THE RETURN OF THE LONE GUNMAN 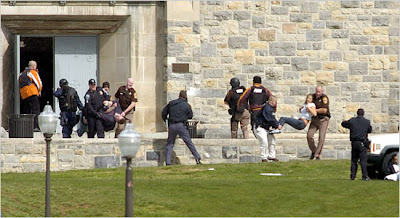 For the last hour or so I have stared at the TV, essentially watching nothing except meaningless images of cops in bullet proof vests, armed with automatic weapons, standing around looking grim as TV cameras troll like sharks in search of images, and voices babble non-information. All I learned is that some kid with a couple of pistols and a shitload of ammunition went on the rampage and killed and wounded a whole lot of people. I have been told countless times that this is a record for civilian mass slaughter in the USA, like massacre was some variety of bloody sporting event. It has been suggested that the shooter was oriental and thus a foreigner. One talking head wanted to involve rap music.(?) There would also appear to be some two-hour anomaly in the timeline, which is a dash of mystery in a situation in which I am really leaning nothing. I’m also being told that the President – a man who likes to do his mass killing from a long and comfortable distance – will be on TV in less than an hour. I don’t quite understand why. All I know was that I had to sit down and write this, away from CNN, because all my television is doing was providing me with an inert, unhealthy, and vicarious connection to sudden death on the other side of the country and, as I watched, I begin to feel wholly disgusted with myself and decidedly less than clean.

FIRST THE BURN THE BOOKS.... 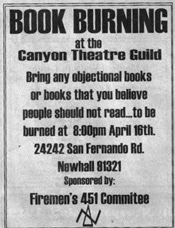 I believe this is some kind of celebration of Ray Bradburym but in this day and age, who the hell knows anything for sure.
CRYPTIQUE -- "And love is just a funeral pyre."
Posted by Mick at 4/16/2007 01:19:00 AM No comments:

The folllowing was recieved earlier...
"I think that nice young man in the "Marijuana will mess you up" poster just needs to put some color on his walls,.....a few lamps and pillows - much happier....maybe butter yellow would be nice. Best wishes, W Phillips (Mrs) Purley, Surrey"
Posted by Mick at 4/15/2007 09:42:00 PM 1 comment: 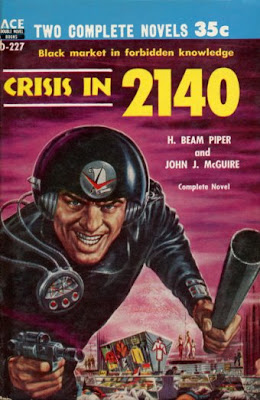 I think Dick Cheney read this as a young man (and maybe accepted it as a guide to crisis management.) I also note that 2040 is around the generally estimated date of the Singularity. 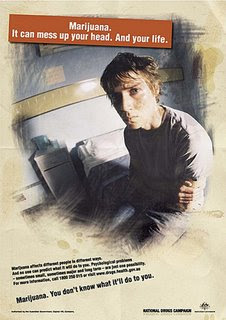 And after I’ve finished doing that, I’ll reread this linked poem and reflect on the fact that there are people out their who accept this sub-sentimental banality as an equivalent of art/reality, that they not only hold opinions molded by this kind of bathos, but they also get to vote.

The secret word is Challenged

CRYPTIQUE – “You know all the rules by now and the fire from the ice.”