SMOKE ON THE WATER 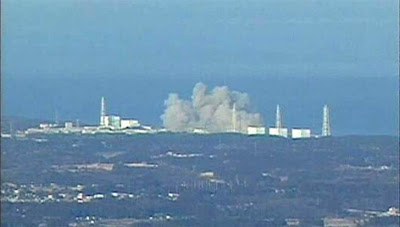 My TV wasn’t showing a lurid disaster movie. This was the real thing. I even had friends downwind of the catastrophe. After the ominous and possibly apocalyptic explosion occurred at the Fukushima Daiichi atomic power plant, and one of its reactors threatened meltdown, the world waited with baited breath for genpatsu-shinsai – an enduring atomic disaster triggered by earthquake. Maybe the worst danger has now passed. As I write and post this it’s still unclear. But it’s all too plain that with a single – albeit massive – seismic flip the planet proved that it is not the passive victim of human exploitation and the philosphies of abstract greed. Is this the Gaia hypothesis in action? I don’t know. That might just be another human conceit to place our selves at the centre of the action, but I am not able dismiss it out of hand. All I know is the current devastation in Japan – and the fear of what might be, and still could be – must serve as a call to reevaluation of the narrow, ignorant, profit-driven aspirations of the corporations and the billionaire barons who currently attempt to govern us and negate and sideline any more realistic or intelligent considerations of how this world might be organized for the benefit of both humanity and its planetary home.

Our good pal John May has a lot to say about nuclear power on The Generalist. Click here.

EVERYTHING ELSE SUDDENLY SEEMS VERY SMALL 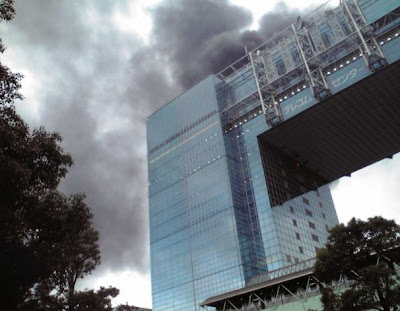 Taking in the sheer scale of a massive natural disaster is never easy, and the devastation in Japan is no exception. To make the idea more manageable I can only reduce it to concern for friends and loved ones in the danger zone, and attempts to relate it to previous personal experience. I went through the 7.1 Northridge quake in Los Angeles, and that was quite scary enough. I can barely imagine how an 8.9 might have felt. Beyond that the disaster can only really create a sense of complete awe and reluctant awareness of just how small a human being can be when compared to the size of the entire planet with tectonic plates in motion. I already know that some of my friends in Japan are okay and I hope that others are also safe. That’s all I can really say except that it doesn’t quite seem the time for fun and gags, Frozdicks and gratuitous beauties. More a moment for sober reflection. I’ll see you all tomorrow.
Posted by Mick at 3/11/2011 09:01:00 AM 3 comments:

HIS WEARINESS AMAZES HIM 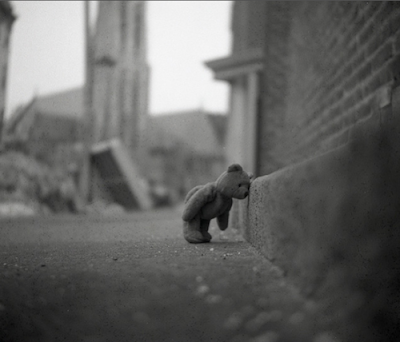 I just missed two days of Doc40. Times come when the hill seems almost too steep to negotiate. Maybe it was all the excitements of personal archeology, or final weeks of the first real winter the I’ve lived through in years, or perhaps simply the survival work load bowed my back, or the time that’s been wasted for me by corporate entities that want to take over everything but cannot in reality plot an accurate flow chart for the proverbial piss up in the equally proverbial brewery. And then, on top of it, the TV news is relaying the first top-gun rattling of another fucking oil war, which fills me with a drained depression because, in addition to the graft and carnage, a hideous majority of modern conservatives would – in their ignorance – love to put capitalism economics on a permanent war footing.

BUT IT COULD BE WORSE… 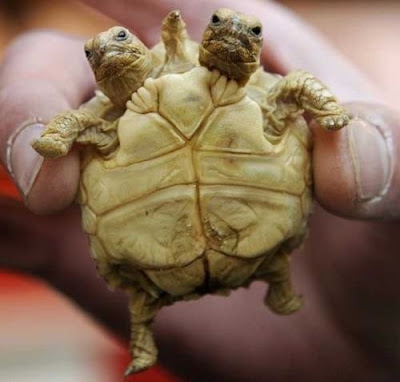 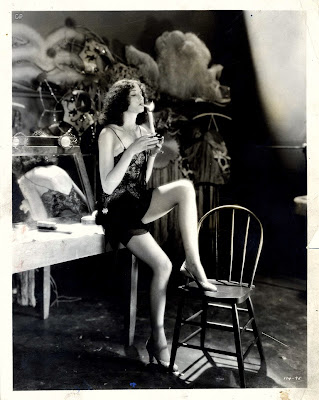 I DON'T EVEN WANT TO THINK ABOUT THIS 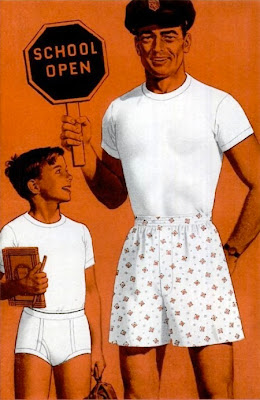 OH MY GOD! (Some History Will Never Repeat Itself) 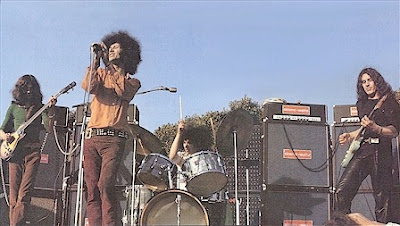 After waiting more than an unbelievable forty years to see the light of day or be seen by anyone, glorious grainy black and white footage of The Deviants in Hyde Park in September 1969 has finally been posted on YouTube by a crew called VideoHeads out of Amsterdam, led by the legendary Jack Henry Moore. It makes me very happy for a number of reasons, not least of which – after taking so much shit at the time as the allegedly “worst band in the world” – we actually kicked ass in front an estimated audience of 80 thousand in a manner that would have been wholly acceptable and even lauded some six or seven years later. Russell and Sandy are a rock solid foundation. Paul Rudolph’s guitar is mighty, and, as for me, when did you see jackknife shaman dancing the like which closes the show? Okay, so Rudolph and I engage, at one point, in some the atonal freeform bellowing that we called “mouth music”, but no one seems to have a problem with it. And we always attracted Hells Angels and crazy naked psychedelic women.

What you have up on YouTube right now is two sections of around nine minutes each, which – believe it or not – make two halves of one song – what the Pink Fairies would title “Uncle Harry’s Last Freakout”. I guess that was the real difference between the 1960s and 1970s. We could make a thrash last 17 minutes where the Clash or the Pistols would cut it off after three. And, by way of explanation for the opening harangue, the London Street Commune were staging a protest against homelessness by occupying the mansion at 144 Piccadilly at the other end of Park Lane. I’d been warned by the ranking cop at the park concert that my feet wouldn’t touch if I got into any kind of rant about the squatters who were about to be evicted in a massive police action. I just had to test the limits.

But don’t take my word for it. Here are some reminiscences from ukrockfestivals.com.

“The most memorable bit for me was when The Deviants were playing and a semi-nude young lady got up on stage and began to dance. As she started to remove the rest of her clothes there was a huge cheer from the crowd. Then a Hells Angel also got on stage and took his leather jacket off to another great cheer but then he put the jacket over the young lady's shoulders and guided her off the stage, this time to a chorus of boos from the disappointed audience. It was though, another wonderful afternoon in Hyde Park with great music and relaxed atmosphere.” – Steve Trusler

“I remember Al Stewart sitting down on a chair on stage and playing a mellow set of bedsitter folk songs. Quite a few people seemed to like him, but I found him rather wishy-washy (yawn). I remember that the Deviants were absolutely not wishy-washy ~ very aggressive and angry. I've heard them described as being the first real punk band. Works for me. But most of all I remember being entranced by the sublime musicality of the Soft Machine. A brilliant band. So totally outside. Imprinted on my memory is the sight of Robert Wyatt singing, and playing amazingly complex drum patterns, wearing just a pair of Y-fronts.” – Jeremy S.

MORE FROM BACK IN THE DAY 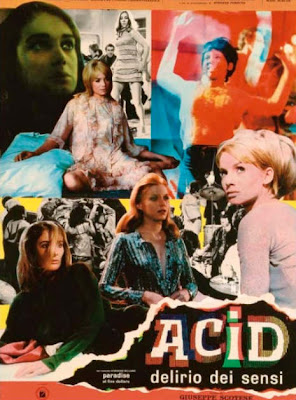 While we’re in the realm of grainy black and white, click here for old school underground go-go lifted from Dangerous Minds.
Posted by Mick at 3/07/2011 01:02:00 PM No comments:

MEANWHILE, BACK IN THE MODERN WORLD… 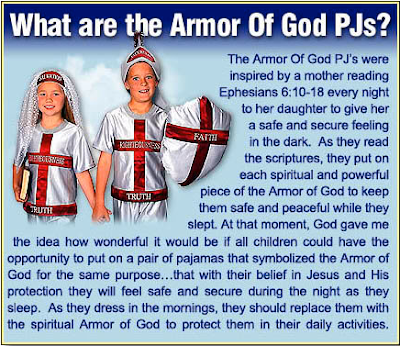 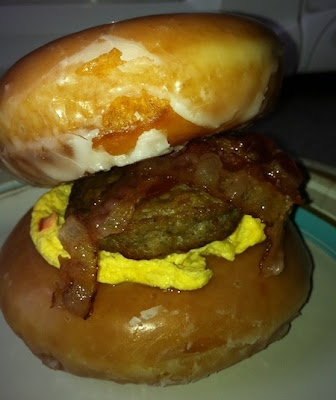 Egg, bacon, sausage sandwiched between a pair of Krispy Kreme glazed donuts? I think this might be too much for even my capacity for wholly irrational, self-destructive, damn-the-heart-attack recklessness. I can appreciate how a need for Homer Simpson-style cultural rebellion may have developed as the healthier-than-thou turned good eating into a faux-altruistic false-virtue, but I’m not sure that this fat and sugar assault would even be all that tasty. And if you wanted to really go for the gross out, wouldn’t ketchup be mandatory? 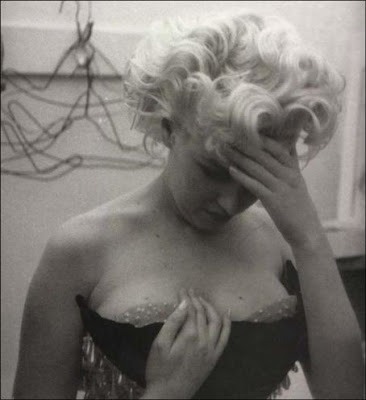 JUST TO COMPLICATE THE QUESTION OF WHICH CAME FIRST… 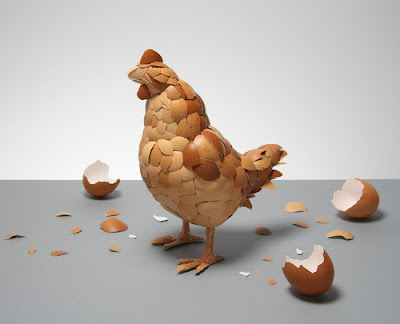 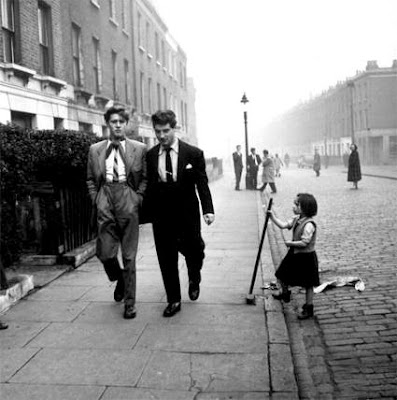