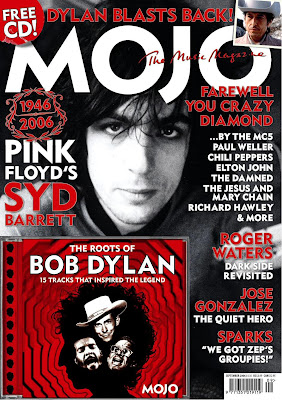 The joke used to be that, if all the rock writers went on strike, no one would notice. In the next week or so, however, this may be put to the test.

“The following statement has been agreed by representatives of 200 freelance music journalists. Bauer music magazines Kerrang!, Mojo and Q are in a stand-off with 200 freelance writers and photographers over the company's attempt to impose a copyright-grabbing contract. This comes just eight weeks after Mojo became the UK's best-selling music magazine in ABCs which, according to Bauer UK chief executive Paul Keenan, proved that "investing in editorial content is a winning strategy". Bauer, a German-owned publisher which bought the music magazines and other consumer titles from Emap in December 2007, is seeking to impose new, draconian contracts on all contributors to Kerrang!, MOJO and Q. These contracts remove copyright and all financial, legal and moral rights from freelance writers and photographers while simultaneously requiring that the freelances provide Bauer with an unlimited lifetime financial indemnity in the event of legal action arising from their work. Among various other restrictive impositions, the contract further grants Bauer the right to sell stories or photos to whomever they wish without reference to the writers, photographers or the subjects of the work - and it even presses freelances to acquire licenses from their subjects for the company to use their image for its own profit as and when it wishes. In a covering letter delivered with the contracts, Bauer issues an ultimatum: after April 16, if the contributors do not sign, they will no longer be commissioned.” (Click here for more)

I have it easy in this matter, having not written anything substantial for Mojo in quite a while. I believe I’ve fallen from favor in those quarters and thus, without jeopardizing any near-future income, I can happily tell Bauer, “hell no, I don’t need your stinking contract. Fuck you and the Hanoverian you rode in on.” If I come up with a story their editors really want, I will negotiate my own deal and they will never ever get any of my raw research material, something else that Bauer has been contractually demanding.
But, you ask, as a true righteous Doc40 reader, how can I aid this worthy cause, even if I don’t give a damn about copyrights and residuals? I suppose, if they force the contract and the intimidated cut and run, you could stop reading the magazines. Not just as a political gesture, though. The quality will plummet. In such an atmosphere of drudgery, and corporate contempt for content, the writers who remain will not go the extra mile. No one is going to do some exhaustingly researched, months-of-work, story on (say) Syd Barrett, just to hand the whole package over to Bauer suits who don’t know what to do with it anyway. By pulling this legal larceny, Bauer revealed the basic slash-and-burn attitude of too many in the print industry. They only see their magazines as advertising platforms. In an infinity changing media world, their only strategy is to cut the cost of content. Ultimately it’s an insult to the reader. They’d print drivel by interns and press-kit photos if they thought they can get away with. The trouble is that, right now, they think they can.

The thing is, these are pretty standard restrictions in the USA. It's one of the biggest reasons I stopped doing it. I was tired of giving magazines my best stuff and granting them all rights to it in perpetuity and being forced into signing agreements where I indemnified them in perpetuity, etc. etc. So I only *kind of* feel for these guys. Is it Draconian? Sure it is, but it's been in place here for 20-odd years, so compared to us in the USA they've had quite a free ride for quite a long time. In the interest of full disclosure, I did take advantage of that fact a time or two myself by the simple expedient of selling my stuff overseas!

I'd stop buying Kerrang! Mojo and Whatsit in sympathy with the writers except I haven't bought a copy of any of them in 20 years.
wv is prophshi.

One counter to corporate power is the expansion of a robust black economy.

In the fragenting future, today's contracts from a print and paper world won't be worth the paper their printed on.

Who is the 'they' here? Let's not hold hard to the ever-tempting idea of 'the man' and let's instead consider the foul position that the staff writers and editors find themselves in. MOJO and Kerrang may have their faults but, having written for MOJO in the past, I know that the staff have always worked closely with their writers to get the best deals for them and to present their work in a well-edited and beautifully designed magazine. It was always at the damned payment/accounts stage that things fouled up. I also happen to know that they were willing to find ways to work round these contracts. If you HAD approached them with an idea post-contract, that would have been YOUR property and therefore not subject to the severe measures of Herr Bauer. having been privvy to the union round-robins I feel that this withholding of work could have been handled a lot better. I wouldn't want, say, my ten-page Barrett feature to end up the property of the man but, given I came to them with the idea, it certainly wouldn't be. The problem is believing that someone out there is waiting for a collected anthology of my 150 word Sunny Day Real Estate album reviews. It's the principle of the matter, you say? I say that if they want ownership of commissioned work they can keep my album reviews, I'll hold onto the scrupulously researched original feature ideas. I know for a fact that that is how the staff were willing to work. I still think the situation can be resolved.

You make some good points, my friend, and, to be realistic, I don’t give a rat’s ass about the copyrights on reviews or short items. On the other hand, features, essays, and major interviews are part of a writer’s retirement plan. Believe me. The other part of this problem is the preservation and control of one’s work. Once a corporation has grabbed your copyrights, it won’t have a clue what to do with them except as abstract paper assets on a balance sheet. No systems will be creaed to exploit them. Suits don't create. This copyright grab is only legal dept make-work, and a smoke screen for management who don’t have a clue what to do as print sinks like the Titanic.

You think it's bad for the writers, how about the photographers whose shots would also be 100% owned by Bauer in perpetuity. Having lived long enough to have seen rock photogs like my pal Baron Wolman and the late Jim Marshall make real folding money out of shots they made 40 years ago, I've come to realize the importance of owning these images and holding on to them until they appreciate in value. If Baron had had to grant Rolling Stone eternal rights to his work, he'd be starving today.

As a staff writer and photographer, I'm accustomed to having my work wholly owned by my corporate overlords, and as they pay me a salary (technically), I don't begrudge them that. I do squirrel away copies of everything I create, and if they want to hunt me down and try to sue me for using it in my portfolio in the future, they are free to try.

I do also work freelance, and with a day job am able to insist on terms I like. If the client doesn't want to treat me fairly--including a living pay scale--I walk. It's my little bit to remind the corporate fuckheads that there is a big, fat serious difference between an amateur and a professional. I am about to attempt a foray into TV, we'll see how that one goes.

The amount of regurgitated PR I see is stunning.

I have been enjoying the English Classic Rock magazine a great deal, by the way. I think a lot of their writers are on staff, but please correct me if I'm wrong. A really nice book.

Bauer have, informally, been offered unlimited licences for reviews etc - indeed, for all the stuff they will need.

That's not good enough for them - there has been a corporate edict from Herr Bauer in Germany. As for the verbal promise that the Syd Barrett feature you research and bring to them independently will remain your property - well, it ain't worth the paper it's written on.

I have always faced this "dilemma" with two suggestions - firstly, attempt to negotiate a deal wherein copyright/ownership reverts to the creator after a given period - say a decade - and then after say 25 years becomes public property... I don't believe that the act of creation should grant rights in perpetuity..
and, secondly, START ANOTHER RAG... if you're any good, the media today is much more art-friendly than ever before. So start a new mag and work it up to where it's fodder for some faceless bluemeanies and then take the money and run to the xerox machine to start again.
Paper, and the legal/ethical issues it brings in ownership and stewardship is a dying format, albeit worth preserving and re-inventing.
This is only a problem to those that feel that journalism and it's attendant arts,gives one some inalienable right to a life of success, fame and riches beyond imagination.. I don't say that ay of them/us ever achieve such a state, but if we believe we're entitled to it, then we're sunk. Writing, like dance or magic, is reserved for the desperate and the dangerous and the damned... and, since ownership is, by definition, censorship, it's all a moot argue anyway, right?