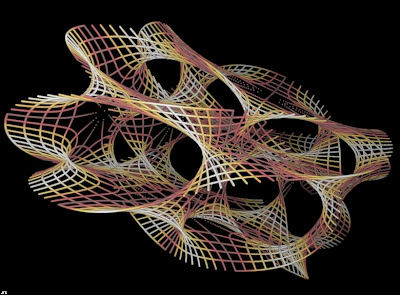 The divine Valerie sent us the following extraordinary report…
“For many months, the GEO600 team-members had been scratching their heads over inexplicable noise that is plaguing their giant detector. Then, out of the blue, a researcher approached them with an explanation. In fact, he had even predicted the noise before he knew they were detecting it. According to Craig Hogan, a physicist at the Fermilab particle physics lab in Batavia, Illinois, GEO600 has stumbled upon the fundamental limit of space-time - the point where space-time stops behaving like the smooth continuum Einstein described and instead dissolves into "grains", just as a newspaper photograph dissolves into dots as you zoom in. "It looks like GEO600 is being buffeted by the microscopic quantum convulsions of space-time," says Hogan.
If this doesn't blow your socks off, then Hogan, who has just been appointed director of Fermilab's Center for Particle Astrophysics, has an even bigger shock in store: "If the GEO600 result is what I suspect it is, then we are all living in a giant cosmic hologram.”
Click here for the full story.

The secret word is Quantum

breaks down into what? the nothings?well done chief,atm,cyber currency,battle lizards(well maybe not the last one) what else have you predicted?

Umm...a lot of imaginary drugs that drive the users screaming crazy but keep them coming back for more?

that`ll do for me

Ouch! My head hurts after reading the full article, but if I envisage a flat reflector on the edge of space and time diffracting information back in many directions (like parallel possibilities or rays of light through a prism), I can just about begin to rasp that the theory might not be absurd as it seems...

One sugar lump or two ?

Maybe everything is just a someone's else dream... quite a crazy dream... and soon he's gonna wake up... and go away.

If you will excuse a detour into metaphysics, or that strange place where Buddhism meets quantum physics, this is a subject that I have meditated on for a great deal of time. This conjecture doesn't surprise me in the least, it is as one would expect.

Change the signal harmonics and change reality, this is why mass meditation reduces crime rates in surrounding areas.

The Diamond Sutra alluded to this conclusion over a millenia before the "discovery" of the hologram.

If "Leftcoastcat" is Kitty (I get it, now), then I have to agree. Very eloquent comment, indeed.

Eloquent indeed, but why am I still wretched, why is it still raining, and why do I still want to go back to bed?

Is that why I want to go back to bed?

The WV is now inger. She might be a better reason.