STEAMPUNK ROCK & ROLL? (Somehow I doubt this is the new Elvis) 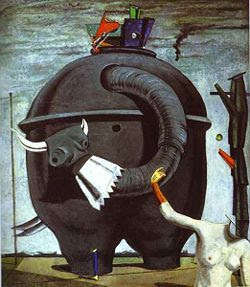 Our pal TPG sent the following report from The Guardian of London. Seems like a steam punk version of rock & roll has evolved over in the old country, which – even though promoted by the offspring of Vivienne Westwood and Malcolm McLaren – I must confess appears a little behind the cultural curve. Steam punk was the science fiction big thing some years ago, but then rather wore itself out. I even tried it myself – at the strict instigation of Tor books – and while kinda fun, it didn’t end well, although in one of the books I did feature a steam punk band with huge acoustic metal speakers.

"You can define steampunk as visions of the future that never was, as seen through the technology of the Victorian era, when things were made of pistons and steam rather than silicon and transistors," says Slater, who is dressed in a ruffled white shirt, pegged trousers and spats. "It's an aesthetic, a geek culture, a craft culture." It's certainly all those things; steampunks take pride in their ability to make 19th-century-style clothes and gadgets from found objects, creating intricate gizmos from brass, leather and rivets. A London-based American musician called Thomas Truax even makes his own instruments: there's one called the Hornicator, made from a gramophone horn; another, known as Mother Superior, emits steam when played.” (Click for the whole confusing story.)
Posted by Mick at 10/18/2008 02:38:00 AM

Headed right round the bend?

Steampunk as literature is over, but steampunk as craft movement is just getting under way. I'll have to admit, I saw a steampunk ukulele, complete with valves and gears, that really impressed. Being fundamentally and deeply lazy, I had some trouble understanding the whole craft thing. Then I found a reference point. Remember those post Whole Earth Catalog hippie wrench nazis? Those guys who were always boasting to each other about the esoteric tools they'd acquired or the junk piece of equipment they were busy restoring? I had a hippie job for a while, where I worked with a bunch of those people. They were constantly wheeling out their custom (home made) elaborate tool boxes and boasting about their ability to weld cast iron to mild steel. I think something similar is driving the steampunk scene.

But I'm not sure I want to hear a a steampunk ukulele, complete with valves and gears even if Jeff Beck was playing it.

Diamond Jim, It was the point where two completely ridiculous subcultures met. Being part of one of them, I thought it was very cool. Personally I think resonator guitars are very steampunk. I, however, am a ukulele player and wish I had a national resophonic brass, nickel plated, engraved resonator ukulele. They transcend the merely retro and approach the grandeur of, say, the '49 Mercury with Continental Kit. Plus, it's cheaper and does not contribute significantly to global warming. I'm not sure what Jeff Beck would do about any of this.

Diamond Jim seems the kind to view the ukulele with definite contempt. A Fender boy is my guess.

I recall the late and greatly lamented Viv Stanshall had an extensive collection of hybrid Victorian instruments of which he was inordinately proud. Many of incorporated some approximation of a gramophone horn.

Everybody's at it (minus the resophonic brass, in this case).

I recently heard a violin that had a resonator and grammophone horn rather than a sound box. It was a modern copy of a design that was built for use in early recording studios. It was necessary to direct the sound into the recording horn. I am no steampunk, too old for one thing, but to see hear and hold the instrument was a delight.

Which brings me back to Diamond Jim, not to talk about the guy behind his back. Perhaps he does favor Fender Guitars. If he does, he probably favors, oh say, a pre-1964 strat, through a vintage tube amp (with original tweed covering). He might even claim that he favors them because he can prove, using sophisticated devices that they are capable of producing a range of frequencies that can only be heard by new born puppies. He may disdain modern electronics because they lack this true fidelity of reproduction. That might all be true, but it is probably also bullshit. Deep down inside, he favors the vintage strat because it is fuckin' cool.

Nothing wrong with that, is there? I like resonator instruments and late '40's coupes because they are cool. I spend a lot of time justifying a lot of shit. I don't have to justify the coolness of resonator ukuleles.

For some reason, I can't stop thinking about this post. How many other cool tech subcultures are there? Rat Rodders don't build cars that are faster than the latest from Bavaria, they build cars that are cool. I know guys who build tube guitar amps and wooden boats and mandolins. There are modern, robot controlled factories in China that can crank out tens of thousands of amps, and boats and mandolins a day. They are perfectly serviceable and will do most anything you might want them to do, but there is nothing even remotely cool about them.

Then there's that nostalgia for a future that never happened. Victoriana doesn't light me up, but man do I love spaceships with RIVETS! Every time I picture Commander Cody reentering the atmosphere, I see all of those rivet heads melting off and his ship disintegrating, but I those rivets still make me laugh. They're cool. They're part of a luminous future that never happened.

After a brief pause, I have no trouble understanding it, I'll have to say that post industrial tech is cool and imaginary retro futures are cool and past a certain point it's no surprise that there are bands who play for people who agree with me, and what's hard to understand about that?

I've probably slipped around some hand made mental corner and stopped making sense. Fuck it.

When do I get my ukulele?

How about a hand made steampunk laptop computer. Cool.

Just my smart mouth, dude. All the enthusiasm is way cool. Clearly this is more than just some McClaren Family scam.

Spaceships with rivets are HOT!

The McLarens just want in on it.

We certainly agree on that. They've been energy vampires since forever.

But I'd like to hear how the shit sounds before I pass another sweeping judgement.

We seem to have hit a rich vein here. This is fascinating stuff. And Doc 40's happy to be a forum for any neo-steam punk reports or images. BTW Viv Stanshall actually had one of those gramophone-horn violins back when the Bonzos were less electric and more demented Victorian. (I kind of agree with D.Jim that the shit ought to be listenable on some level and that McClaren is nothing but a cultural carpetbagger.)

Ahhh - Viv and the rest of the gang. That's going to be my musical escape tomorrow. Cheers chums

Oh I dunno Mick. Who gets to decide listenable? I just like the weird do it yourself aspect of it all. Just inventing a subculture based on a couple of vague science fictional notions from twenty years ago. That's kind of cool.

Now that we're all historians of the idea, it's easy enough to trace these things, but I've gotta think how conscious were we of our historical antecedents when we were shorter, and skinnier with more hair? I remember being absolutely astonished that some guy named Jack Kerouac wrote down all of my best ideas in a book called "The Dharma Bums." How did he know? Of course, now the question is, How did I know?

Anyhow, there's tons of cool lo/tech at Dinosaurs and Robots:

It's the all encompassing journal of people who like to make things and hack existing things.

Sort of the grownup of the underground do it yourself scene. Includes photos from huge cool state of the art things like tugboats and warships. Definitely an idea source for futuristic imagery.

I have friends who are much, much more into this stuff than me. I believe it was the late Lester Bangs who said that vicarious experience should suffice, reality is for hippies.

Amazing stuff, Jon. Doubtless some will surface on Doc 40 since the Doc's larceny knows no bounds.

As to "who gets to decide listenable", I figure it's in the ear of the beholder(and remember you're talking to a man who listened to almost all of Lou Reed's Metal Machine Music) I would totally approve of a symphony for massed Mexican leaf blowers but I don't want to hear it over breakfast (as happens round here every Wednesday.)

Yeah, you've given me lots of interesting things to think about, just returning the favor. Somebody should do something science fictional with the underground engineering scene. Rudy Rucker, who lives right in the middle of it, has incorporated elements. Hell, he might have invented the elements. Steal from those sites, write stuff based on them and take up the ukulele. Those are my suggestions. I want to drive one of those giant mining trucks at Telstar Logistics. I'm treated to the leaf blower symphony on Saturday mornings. Saturday mornings.

Saturday morning? I would kill.

My wonderful landlords, the gay cowboys, Buck and Tex. They hardly ever give me anything to complain about. I have to overlook it.

Malcolm is desperately looking for something new (after Lydon & co). He should have been in Bosnia to see The Tommy Gun Punk. That was the real inspiration for this fucking society.