CITIZENS ARE PISSED OFF 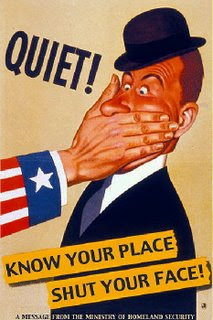 “More than a third of the American public suspects that federal officials assisted in the 9/11 terrorist attacks or took no action to stop them so the United States could go to war in the Middle East, according to a new Scripps Howard/Ohio University poll.
The national survey of 1,010 adults also found that anger against the federal government is at record levels, with 54 percent saying they "personally are more angry" at the government than they used to be.
Widespread resentment and alienation toward the national government appears to be fueling a growing acceptance of conspiracy theories about the 2001 attacks on the World Trade Center and the Pentagon.
Suspicions that the 9/11 attacks were "an inside job" _ the common phrase used by conspiracy theorists on the Internet _ quickly have become nearly as popular as decades-old conspiracy theories that the federal government was responsible for President John F. Kennedy's assassination and that it has covered up proof of space aliens.” Click for more.

The secret word is Movement

Think America will make to the election?

Paul Craig Roberts (if I had heroes, he'd be one) says
"The hour is late."

Here's the link. It doesn't get laid out any clearer than this... and from a former republican:
http://www.counterpunch.org/roberts08052008.html

If it has been suggested once, chances are that it will get suggested again... and after so many times of it getting suggested, somebody will eventually try it out.

"...rallying a nation of television viewers to hysteria, to sweep us up into the White House with powers that will make martial law seem like anarchy!"

And now it comes back to The Manchurian Candidate.

I don't understand politics at all, I can't get over the fact that people get into office when they're obviously not the smartest people around... cause politicians don't do rocket science or brain surgery, they don't even invent important stuff like the internet or poptarts.

Shouldn't Stephen Hawking be president of the planet or something? He's the smartest person we have, right? Why aren't the smartest people we have in control?

Because the smart people don't necessarily have the ass-kissing, back-stabbing, grovelling-for-a-buck skills that are needed to achieve political power.

Oh, if anyone wants to delve into the Pentagon part of that day, I highly recommend the ground-breaking work of Craig Ranke over at The PentaCon. Within that site are a series of photos that show the staging of the allegedly downed light poles, which is actually an adjunct to the site's main focus - the actual flight path of the jet and its high-precision, perfectly-disguised flyover of the building.

For a quicker overview, check out the presentation at ATS.

That should pretty well get your mind a hummin.'

And Faux, they already did Northwoods, it was called 9/11.

Let's hope they don't do it again.